The classical musician brought his touring Bach Project to Laredo, Texas, in hopes that his music will connect people with each other no matter their cultural differences.

“I’ve lived my life at the borders. Between cultures. Between disciplines. Between musics. Between generations,” said Ma, who performed with the Juarez-Lincoln International Bridge, which connects Texas and Mexico, as a backdrop behind him. “In culture, we build bridges, not walls. A country is not a hotel and it’s not full.”

Ma is one of the world’s most celebrated cellists. He has performed for eight American presidents, and has received the National Medal of the Arts, the Presidential Medal of Freedom and the J. Paul Getty Medal Award, among other honors. In 2018, he embarked on his ambitious Bach Project, a plan to perform Bach’s cello suites in 36 locations around the world. 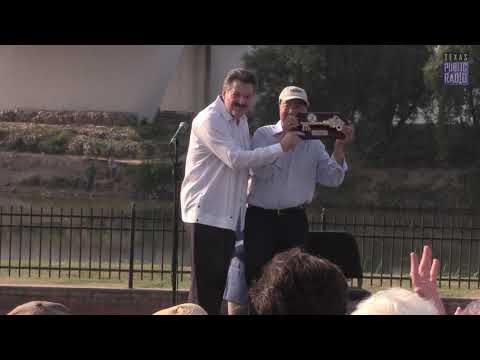 “We live in a world of boundless possibility, but we also face daunting challenges, even to our very survival,” Ma says about his Bach Project. “I believe that during times of stress, confusion, and insecurity, we should share sources that offer comfort, purpose, and meaning. Bach does that. When his music touches us, it reconnects us to our common humanity.”

Ma’s performance was planned as part of a Day of Action, a joint event involving Laredo and Nuevo Laredo, Mexico, to celebrate the common culture between the adjoining border cities. His appearance came as President Trump continues to pursue his goal of building a wall along the US Southern border.

After the concert Laredo Mayor Pete Saenz presented Ma with a key to the city.

“It was truly an honor to host the greatest cellist in the world, Yo-Yo Ma,” Saenz said.”His visit reminds us of how culture connects all of us.”

”It was truly an honor to host the greatest cellist in the world, Yo-Yo Ma. His visit reminds us of how culture connects all of us.” #LaredoProud.

Ma’s next scheduled stop on his Bach Project tour is Lima, Peru, on April 30.

CNN’s Emanuella Grinberg and Artemis Moshtaghian contributed to this report.