NBA player Kyle Korver revealed Monday in an intensely personal essay that he has struggled with the privilege he’s been granted as a white man, and he tasked himself with becoming a “part of the solution” against racism.

“I know that, as a white man, I have to hold my fellow white men accountable,” Korver, a guard for the Utah Jazz, wrote in his article titled “Privileged” in The Players’ Tribune.

Korver described two incidents involving black players in the NBA that made him reflect on racism and his own privilege.

The first involved teammate and friend Thabo Sefolosha when the two were on the Atlanta Hawks. In 2015, Sefolosha was arrested after leaving a nightclub in New York. The arrest resulted in a fractured fibula for Sefolosha and ligament damage, and led to the end of Sefolosha’s season that year.

Korver said when he first heard about the incident, he was “embarrassed” about his response.

“My first thought was: What was Thabo doing out at a club on a back-to-back??” Korver wrote, referring to games on consecutive days. “Before I knew the full story, and before I’d even had the chance to talk to Thabo….. I sort of blamed Thabo.”

Korver also said he cringed at the thought of putting himself in Sefolosha’s shoes at the club that night.

“The police wouldn’t have arrested me. Not unless I was doing something wrong,” he said, summing up his feeling at that realization in one word: “Cringe.”

The second incident was a March altercation between Oklahoma City Thunder guard Russell Westbrook and a Utah Jazz fan. The fan “had said some really ugly things at close range to Russ. Russ had then responded … he’d said he felt the (fan’s) comments were racially charged,” Korver wrote.

In a closed-door team meeting with the president of the Jazz the next day, “my teammates shared stories of similar experiences they’d had – of feeling degraded in ways that went beyond acceptable heckling.”

“It was almost like….. disappointment, mixed with exhaustion. Guys were just sick and tired of it all,” Korver wrote. 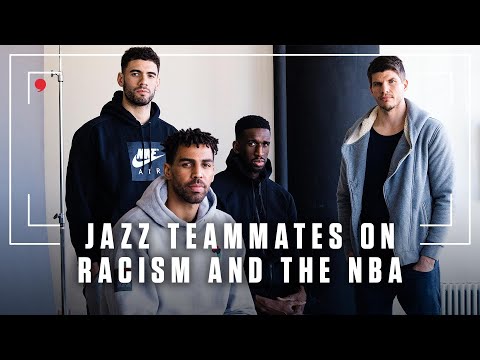 Korver added that white people are not “guilty of the sins of our forefathers,” but are, he believes, “responsible for them.”

“It’s about understanding on a fundamental level that black people and white people, they still have it different in America. And that those differences come from an ugly history….. not some random divide.”

Korver put forth some of his own efforts “that are starting to ring most true” toward thwarting racism, including:

“This feels like a moment to draw a line in the sand,” he wrote.

“I believe that what’s happening to people of color in this country – right now, in 2019 – is wrong.”