Federal prosecutors have filed charges against a woman carrying Chinese passports accused of illegally entering President Donald Trump’s Mar-a-Lago club in Florida. Yujing Zhang claimed a friend had asked her to fly from Shanghai to the club to try to speak to a member of Trump’s family about economic relations between the US and China. After she was detained, US Secret Service agents searched multiple electronic devices including four cellphones, a laptop computer, an external “hard drive type” device and a thumb drive containing malicious malware. Since the President spends a lot of time at Mar-a-Lago, security protocol is tight, and any breach is a serious matter. The US Secret Service says Mar-a-Lago club management is responsible for deciding who is allowed in, but added that the security practices are “no different than that long-used at any other site temporarily visited by the President or other Secret Service protectees.”

Burger King is testing out a meatless Whopper

Because people who don’t eat meat shouldn’t be denied the chance to eat the same aggressively-named fast food as the rest of us.

NASA has named its top three designs for homes on Mars

FOR SALE: Cozy 3-bedroom on the red planet. Close to the sun.

Facebook may launch a curated section for ‘high quality news’

Facebook is eventually just going to eat us all, isn’t it?

Amazon and Whole Foods are slashing prices yet again

Tourists in Iceland flee a wave caused by breaking glaciers

Tourists scramble after a glacier breaks in Iceland.

Los Angeles police are asking for the public’s help in locating the 29-year-old suspect. Meanwhile, the city is on edge after violence broke out last night during a vigil for the slain rapper.

The number of town halls CNN will host with Democratic presidential candidates next week alone. Kirsten Gillibrand, Jay Inslee, Julián Castro, Marianne Williamson and Andrew Yang will all get time to answer questions, tout their platforms, and distinguish themselves from the other 2,835 Democratic candidates currently in the race.

Turkey Halts Traffic on New Hampshire Road So Others Can Cross 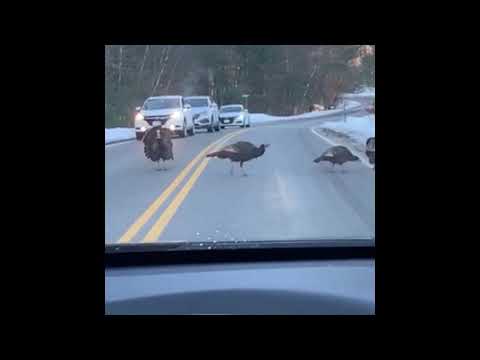 Excuse me, coming through

“Hey boss. Yeah, why am I late? Well you see, there was this line of giant, extremely orderly turkeys in the road…”

Not to blow your mind, but this video of people making art is, in and of itself, art. I KNOW. HAPPY MONDAY. (Click to view)