Music brought Nipsey Hussle together with his great love.

The rapper, who died Sunday after being shot in Los Angeles, was in a five-year relationship with model and actress Lauren London.

The couple shared a young son named Kross and recently opened up about their relationship in the March issue of GQ.

London told the magazine that their individual origin stories about how they began dating didn’t match up.

Nipsey Hussle, more of a movement than a musician

Though both agreed that it all started back in 2013 when London wanted to buy Nipsey’s limited edition mixtape as a wrap present for her co-stars on the BET series “The Game.”

It wasn’t a cheap gift.

“The marketing for the mixtape was that we only made a thousand units and sold them for a hundred dollars apiece,” Nipsey told GQ. “It was a scarcity model. Jay-Z bought a few copies, et cetera.”

London got the mixtapes, started following Hussle on Instagram, he followed back and the rest became hip-hop history.

The pair have been known as one of the genre’s more enduring love stories.

In fact, their GQ photo shoot – which included a picture of London on a white horse with Hussle – sparked engagement photo shoot rumors in January.

London starred in the now cult classic film “ATL,” and Hussle has been beloved as both a rapper and an activist dedicated to uplifting his south Los Angeles community.

He told GQ that his lady love sacrificed for their family.

“Lauren was handpicked by John Singleton to do Snowfall. She read, got the part, shot the pilot…did stunts…this was her dream role,” Nipsey said. “And then she got pregnant with our son. That was a really hard decision for her to make.”

They formed a tight-knit family with their son, Hussle’s daughter from a previous relationship and London’s son, Cameron Carter, by rapper Lil Wayne.

The couple participated in a couple’s quiz for GQ, which as of Monday had almost 3 million views on YouTube.

Hussle revealed that they met for the first time in person at his store on Slauson and Crenshaw in Los Angeles and joked about the object of London’s “celebrity crush.” 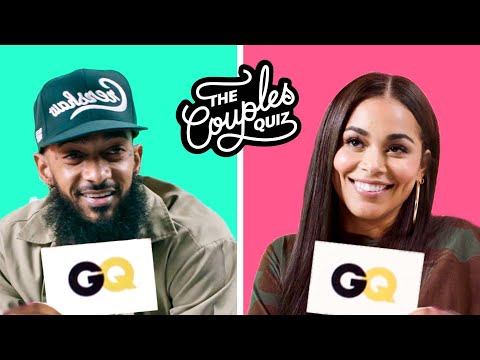 On Monday, there was an outpouring of support for London on social media.

I don’t know why I feel Nipsey Hussle’s death so personally. But I can’t even imagine how it feels genuinely knowing and loving him. I pray that God keeps Lauren London and all of his family and loved ones wrapped in his arms and covered in strength.

“Even though you drive me nuts, you pull up, you show up, and you NEVER let me be alone.” - Lauren London

“That’s my job and I’m good at it.” - Nipsey Hussle pic.twitter.com/hOfLQr032T

“I don’t know why I feel Nipsey Hussle’s death so personally. But I can’t even imagine how it feels genuinely knowing and loving him,” one person tweeted. “I pray that God keeps Lauren London and all of his family and loved ones wrapped in his arms and covered in strength.”