‘Doomsday vault’ town warming faster than any other on Earth

In 2014, Mark Sabbatini noticed cracks in his apartment walls. Then a mysterious bulge appeared in his bedroom and the apartment block’s communal staircase became crooked. “Doors and windows weren’t shutting properly,” he says.

Sabbatini, the editor of a local newspaper, was living in Longyearbyen, the world’s northernmost town located just 800 miles from the North Pole, which is also the capital of a cluster of Norwegian islands called Svalbard.

A landscape of jagged mountains, fjords and glaciers, Svalbard – which experiences four months of darkness in winter, and four months of daylight in summer – is built on permanently frozen ground called permafrost.

For years, permafrost provided a base as hard as concrete. But now it’s melting — and that’s proving to be a problem.

Sabbatini says his building was damaged because it started sinking into the softening ground.

Inger Hanssen-Bauer, senior researcher at the Norwegian Meteorological Institute and editor of a new report about Svalbard, says the climate in Longyearbyen is probably warming faster than in any other town on Earth. That’s because of accelerated Arctic warming – as rising temperatures reduce ice and snow cover, less sunlight is reflected and more solar energy is absorbed by the darker surfaces that have been exposed. 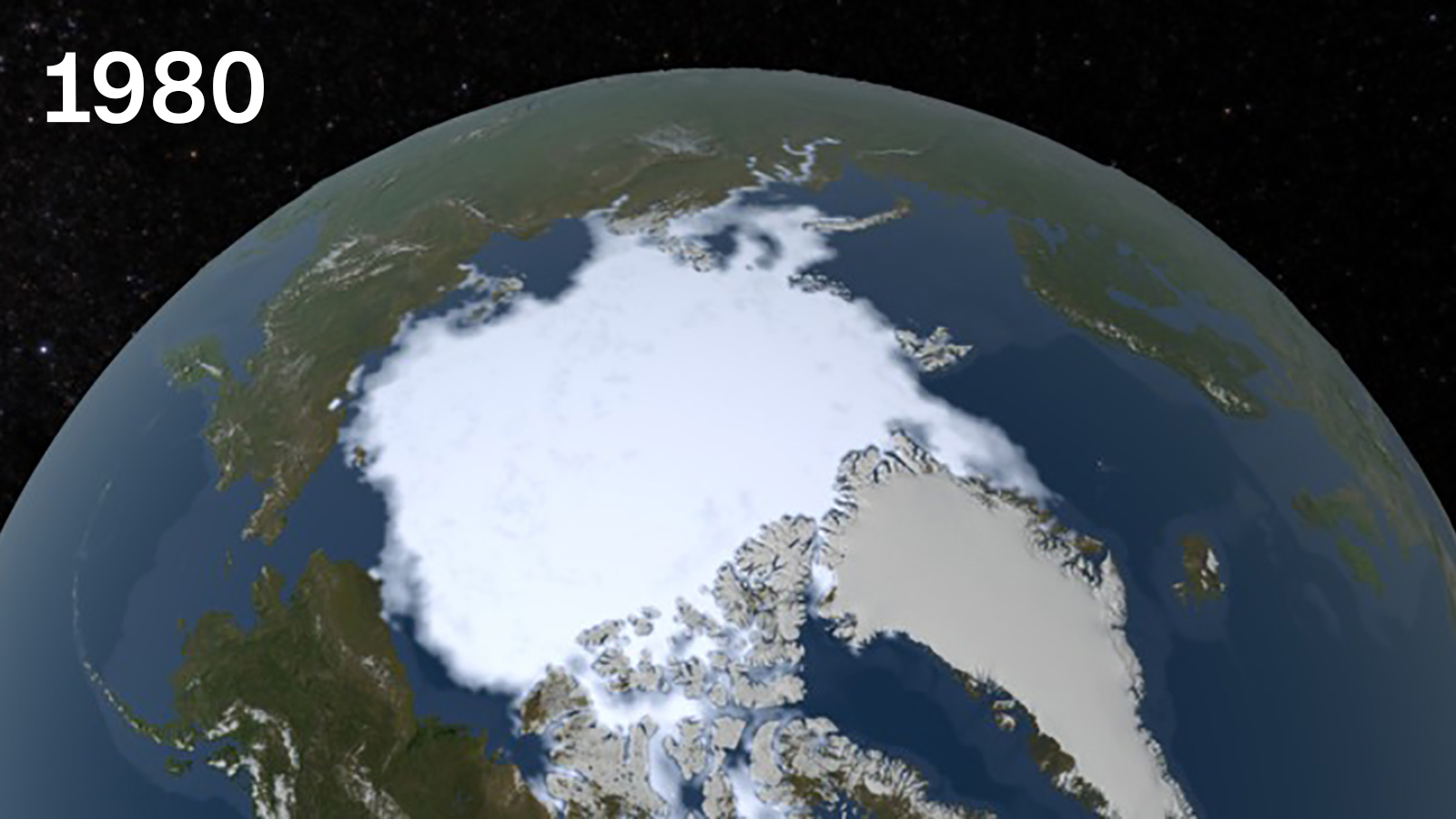 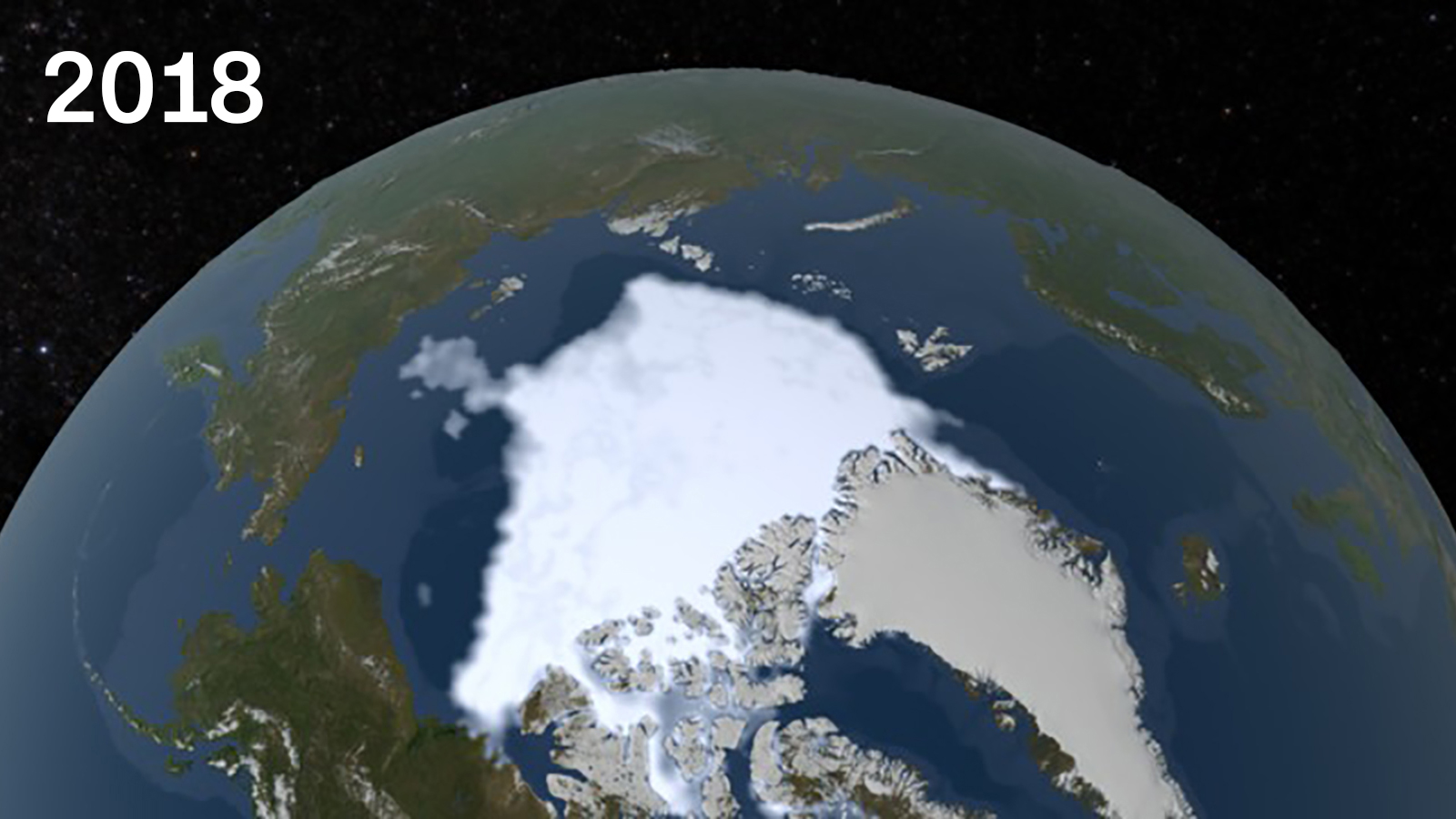 According to Hanssen-Bauer, the annual mean temperature in Longybearbyen in 1900 was -7.8°C. Since then, it has risen by 3.7°C – more than three times the global average of around 1°C. The town increasingly experiences days when the temperature exceeds zero. “All the projections show that this will continue,” she says.

The weather hasn’t only got hotter, it’s also got wetter.

In the late 20th century, annual rainfall in Longyearbyen was about 200 millimeters (7.9 inches), says Hanssen-Bauer. But in the past decade, the town has suffered occasional torrential downpours of 50 millimeters (2 inches) of rain in a day.

The changing climate could endanger the lives of Longyearbyen’s residents, is starving the animals that live in its hinterland and has imperiled an institution which safeguards the world’s crop supply.

In spring 2017, Christiane Hübner loaded her seaside cabin onto a huge sled and moved it 80 meters (262 feet) inland. The permafrost on which her home once stood had become soggy in the warmer, wetter weather, and was being rapidly eroded by the sea.

The previous winter, high waves had washed away 13 meters (43 feet) of shore in one day, she says. That left her cabin perched a precarious four meters (13 feet) from the water’s edge.

Many of Longyearbyen’s buildings are vulnerable because they are built on wooden pillars sunk into the permafrost. In the new climate, the pillars become wet and start to rot, destabilizing the houses.

Most dangerous of all, though, are the avalanches, which are more likely to occur with heavy rain and degraded permafrost.

Governor of Svalbard
A drone captured the aftermath of the avalanche that hit Longyearbyen in 2015.

In December 2015, a fierce storm triggered an avalanche that sent snow, ice and rocks hurtling down a mountain onto houses, killing a 42-year-old man and a two-year-old girl. Christiane Hübner says her dogs narrowly escaped death in 2016 when a mudslide hit the yard where the animals live. In 2017, a second major avalanche hit the town and destroyed more homes.

Eric Marrapodi/CNN
Search and rescue crews at work after the December 2015 avalanche.

Statsbygg is building 60 apartments at a safe distance from the mountain slopes and assessing how many of its properties need to be torn down and replaced.

Instead of wooden pillars, the new homes use long steel poles that are driven through the permafrost into the bedrock. Additionally, the buildings are equipped with sensors that detect temperature, rainfall and movement and alert authorities to any worrying changes regarding the apartments. “We’re taking no chances,” says Aschim.

Chris Jackson/Getty Images Europe/Getty Images
Longyearbyen is home to the world's northernmost church. It has been earmarked as one of the first buildings that Statsbygg will renovate.

For some, the construction of climate change-proof homes is not happening fast enough.

Sabbatini, the newspaper editor, had to leave his apartment in February 2016, after the city government ordered an immediate evacuation. He has not been able to return to his apartment, but has stayed in Longyearbyen thanks to the help and financial support of his friends and readers. Others have not been so lucky.

Sabbatini says that as a result of the destruction and evacuations, “affordable, vacant flats are incredibly hard to come by.” Some of his friends have been forced to leave town, while others have resorted to living in campsites or non-residential buildings such a boathouses, he adds.

Just outside Longyearbyen is a building that must be protected at all costs.

Often referred to as the “doomsday vault,” the Svalbard Global Seed Vault stores copies of the world’s crop seeds. It was created to act as a back-up in case of catastrophes such as disease, pests, war – and climate change.

The vault holds nearly 1 million packets of seeds originating from almost every country in the world, including everyday staples such as wheat and rice, as well as rare species such as the critically endangered Bermuda bean.

“Svalbard is the ultimate failsafe for biodiversity of crops,” says Marie Haga, executive director of the Crop Trust, which built the vault in 2008 in partnership with the Norwegian government.

Haga says Longyearbyen is the perfect spot for the seed vault because the area is not prone to volcanoes or earthquakes, while the Norwegian political system is also “extremely stable.”

The vault is set deep inside a mountain, looks a bit like the lair of a James Bond villain and is accessed by a 120 meter (400 feet) long tunnel. Due to the climate, it is relatively easy to cool the vault’s air to the required temperature of -18°C (-0.4°F)

But as soon as the seed bank opened, it became clear there were going to be problems.

Typically, permafrost that is disturbed by construction work will re-freeze over time says Haga. But against expectations, the ground around the vault’s entrance tunnel never re-froze.

In October 2016, during heavy rainfall, water flooded half the tunnel floor and froze into blocks of ice. Although the water did not reach the vault itself, “we knew action had to be taken”, says Haga.

“We replaced the steel entrance tunnel with a waterproof concrete tunnel,” says Aschim. Statsbygg also transferred heat-producing electrical equipment from inside the tunnel to a separate facility and dug ditches to divert meltwater.

Pipes containing a coolant were threaded through the soil, and a freezing mat laid on top of the tunnel to help the permafrost stay frozen.

Kim Holmen, international director of the Norwegian Polar Institute and a resident of Longyearbyen, has been observing the former coal mining town’s changing landscape for over three decades.

Speaking in February, he said: “At this time of year, we used to have a meter of ice on the fjord, I could see from my window. Now, it’s open water all year round.”

Polar cod, which used to swim in the fjord, have disappeared along with the ice on which they depend. Atlantic cod have arrived in their place, swimming north to the warming waters, says Holmen.

Land-bound animals cannot relocate and starving reindeer are now a common sight, says Holmen. “During winter, reindeer stomp the ground with their front legs to get the snow away in order to graze,” he says. But snow is increasingly giving way to rain. “When the water hits the ground, it freezes,” he says. The reindeer are unable to break through the ice to reach the grass below.

Ben Birchall/PA Images via Getty Images
When rain freezes and forms ice, Svalbard's reindeer are at risk of starvation.

Polar bears are also going hungry. “The floating sea ice disconnects from the land in the summer,” explains Holmen. “If the bears miss the ride, they are stranded on the shore for the summer.”

Unable to hunt for ring seals on the ice floes, in the past the bears would eke out the warmer months by raiding eggs on the cliffs. “But now, because the ice disconnection occurs earlier and lasts longer, the bears run into food shortages.”

According to the new report, the average temperature in Longyearbyen is predicted to rise by 7°C to 10°C, and rainfall by 40% to 65%, by the end of the century, depending on the level of global carbon emissions.

Perhaps most worrying of all, the thawing permafrost could fuel further global warming.

“Permafrost holds an immense amount of carbon – enough to double the amount of carbon dioxide in the atmosphere” says Frans-Jan Parmentier, an Arctic climate scientist who conducts research at a station just outside Longyearbyen.

He says it is vital to reduce manmad-e greenhouse gas emissions to prevent carbon release from happening.

Kim Holmen, of the Norwegian Polar Institute, says that Longyearbyen’s story is a “forewarning” for other parts of the world. Assumptions that present day climate change “is not so serious,” have been proven wrong, he says, adding that the increasing strength and frequency of extreme events “needs attention.”

In Longyearbyen’s case, the avalanches “have changed the mood in the village quite dramatically,” says Holmen. “We identified ourselves as people who could ‘stand the storm.’”

But that confidence has been replaced by anxiety.

“The brutality of nature used to bring joy, but now it scares people,” says Holmen.