Nebraska flooding has turned towns into islands. Now more areas could get submerged

This landlocked state shouldn’t have any islands. But the deadly flooding that has deluged parts of Nebraska – and created islands where dry land should be – could get worse before it gets better.

“This really is the most devastating flooding we’ve probably ever had in our state’s history, from the standpoint of how widespread it is,” Gov. Pete Ricketts said Monday.

More than 8 million people are under flood warnings in the Midwest and the Mississippi River Valley, CNN meteorologist Dave Hennen said. The Nebraska Emergency Management Agency (NEMA) said on Monday that as of 6 p.m., 74 cities, four tribal areas and 65 counties have declared emergencies in the wake of flooding.

“Eastern Nebraska remains the hardest hit area, with much of the southeast part of the state under flood warnings,” he said.

The flooding has already killed two people in Nebraska and one man in Iowa. One woman was also killed in Nebraska during the flood, but investigators are looking into the cause of her death.

US Sen. Deb Fischer said in a statement Monday that Nebraska and Ricketts will send a request to President Donald Trump for disaster aid. However, Fischer said the request can’t be made until “damages are assessed fully.”

She said she would lead the Nebraska congressional delegation in a letter supporting the governor’s request.

“I want all Nebraskans to know that my office stands ready to do everything in our power to lend a helping hand in any way we can,” Fischer said. 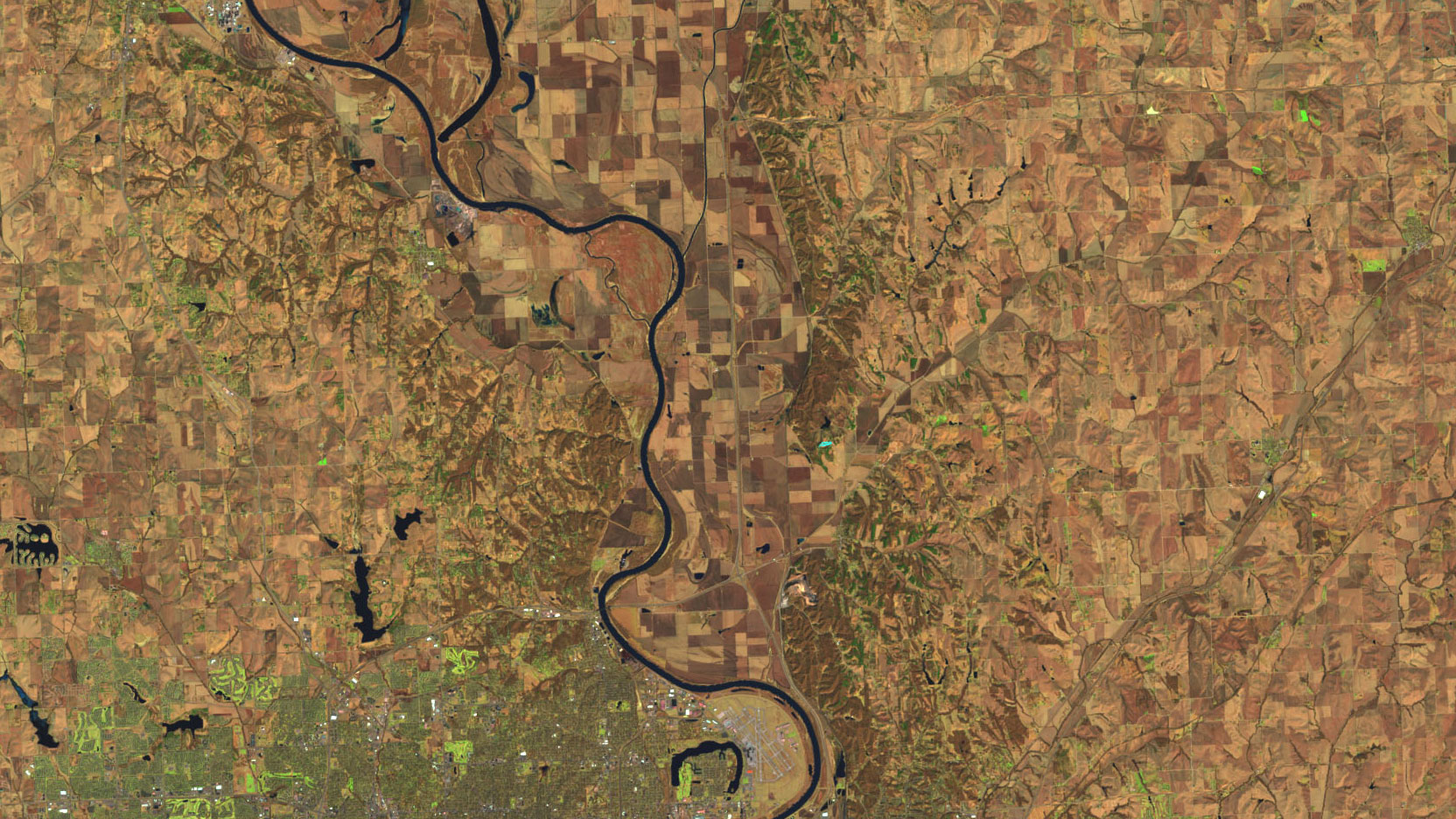 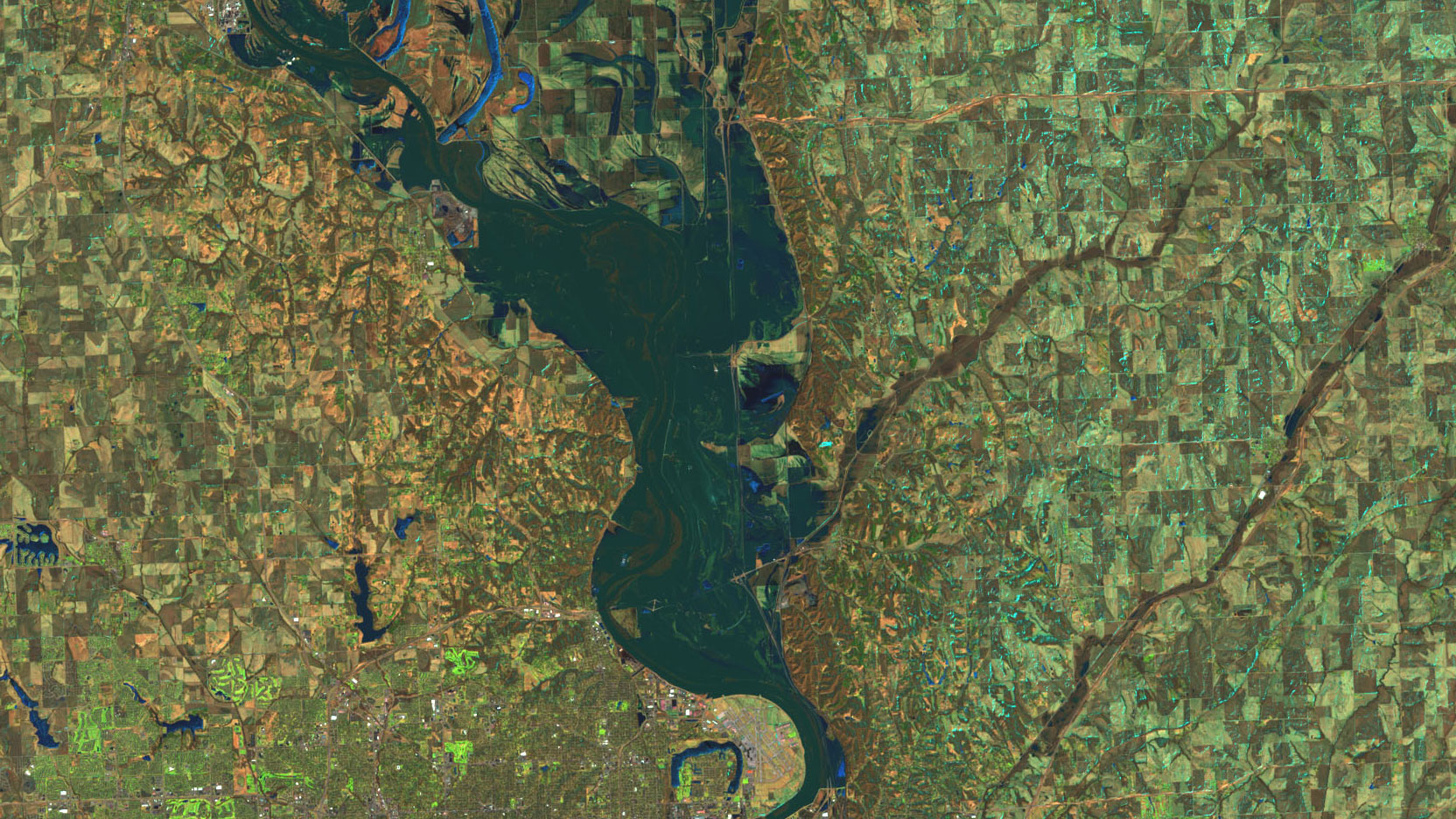 At @POTUS request, @VP will travel to Nebraska tomorrow to survey the damage from the terrible flooding that’s impacted much of the Midwest. He’ll be joined by @GovRicketts & @IAGovernor. Thank you to First Responders and many volunteers helping those affected!

In Lincoln, Nebraska, Mayor Chris Beutler requested a disaster declaration from Ricketts on Monday after flooding caused the city’s 284,000 residents to be placed under restricted water usage.

A weekend levee breach flooded one of the city’s well fields along the Platte River, causing power outages in and around the well fields. Residents are being asked to limit their water usage to drinking, health and limited sanitation purposes.

Combined Effort Continues in Response to State of Emergency pic.twitter.com/132EJBxSmm

Flood records have been shattered in 17 places, and more rivers will likely break cresting records this week, the NEMA said. (A crest is the highest point of a flood wave.)

As of Monday evening, the flood has had a $205 million impact on Nebraska’s public sector, according to NEMA. The state’s private sector has seen a $60 million impact.

Ricketts said during a news conference on Monday the state has been working with the Federal Emergency Management Agency and other federal officials “to get emergency disaster declaration declared, and tap into those federal resources for public assistance and individual assistance.”

“We have submitted our draft and FEMA is reviewing it now,” Tuma said.

Melting ice and snow ended up in rivers and streams, causing flooding and damage days after the precipitation was over.

Highway 275 between Wisner and Beemer is closed due to the road collapsing. Please use alternate routes. #Flood2019 pic.twitter.com/PWcyF9hxRK

When a destructive mix of water and ice barreled toward Willard and Denise Ruzicka’s farm, 15 neighbors scrambled to help.

Lorie Kreycik Knigge was one of the neighbors who raced to the Ruzicka’s five-generation farm Saturday night. The helpers tried to move cattle, equipment and vehicles as fast as they could.

But less than three hours later, water and ice tore through the farm. The blacksmith shop and grain bins were demolished. Newborn calves and their mothers were killed and about 500 bales of stockpiled hay were washed away.

“It just ate away at everything,” Knigge said. “I didn’t think that the power of ice could do what it did.”

James Nennemann heard sirens blaring across the city of Hamburg around 4 a.m. Monday.

A barrier that the town had built and reinforced to hold back river water was breaking. Everyone needed to go.

Now, Nennemann’s basement is flooded. If the water rises 2 feet more, it will reach his home’s first floor.

“Feels pretty numb,” he said as he stared at his flooded home. “It’s not something that you immediately process, seeing things that (you) have never seen before.”

The water treatment plant in Hamburg began taking on water Sunday, according to CNN affiliate WOWT-TV.

Emergency management crews are giving residents bottled water, and a hospital in the city has been disconnected from the plant and is relying on other sources. Customers of the plant were asked to limit their use of water through items like washing machines and dish washers until the plant can get back to regular operation.

President Trump quote-tweeted Iowa’s Reynolds on Monday, saying his team was in close contact with her.

“We support you and thank all of the first responders working long hours to help the great people of Iowa!” his tweet read.

“Our prayers are with the great people of South Dakota. We are staying in close contact with @GovKristiNoem and all the State and Local leaders during and after these devastating floods. Everyone be safe!”

4 deaths include a farmer trying to rescue others

Nebraskan James Wilke, a farmer in Platte County, used his tractor to try to help a person trapped in a vehicle, NEMA spokesman Mike Wight said.

“With the guidance of emergency responders, James drove his tractor over the Shell Creek bridge on the Monestary Road and the bridge gave out. James and the tractor went down into the floodwater below,” family friend Jodi L. Hefti wrote on Facebook.

Please don't come to closed areas to sight see. You put yourselves at risk and the first responders as well. Barricades are placed and roads are closed for safety.

This is Highway 2 on the Missouri River near Nebraska City. pic.twitter.com/hehqDjyCQf

Another Nebraska man died after he was overcome by floodwaters near a dam in Spencer, Wight said.

The Platte County Sheriff’s Office also confirmed the flood-related death of Betty Hamernik, 80, of Columbus. On Thursday, a release from the sheriff’s office said deputies were alerted that Hamernik was trapped in her home with rising floodwaters from the Loup River. The extreme weather and flooding conditions – including high waves and 60 mph wind gusts – prevented emergency responders from getting to her home.

On Friday morning, National Guard rescuers tried to get into Hamernik’s home again and made it in, only to find Hamernik dead. Investigators are still looking into Hamernik’s death.

In Iowa, Aleido Rojas Galan of Nebraska was one of three people rescued from floodwater, Iowa’s Fremont County Sheriff’s Office said. But Galan, 55, succumbed to his injuries and died at a hospital in Lincoln.

An Air Force base is partially under water

Rising waters from the Missouri River flooded about a third of Offutt Air Force Base, including about 3,000 feet of the base's 11,700-foot runway.
Nati Harnik/AP

“Team Offutt has done an incredible job working together to battle this historic flood as best we can,” said Col. Michael Manion, 55th Wing commander. On Sunday, he said the 55th Wing at the base was down “essential personnel manning only.”

In Iowa, a mandatory evacuation order has been issued for some residents of Pacific Junction, CNN affiliate KETV reported. A county board passed a resolution Sunday saying anyone who violates evacuation or curfew orders will be fined $750. 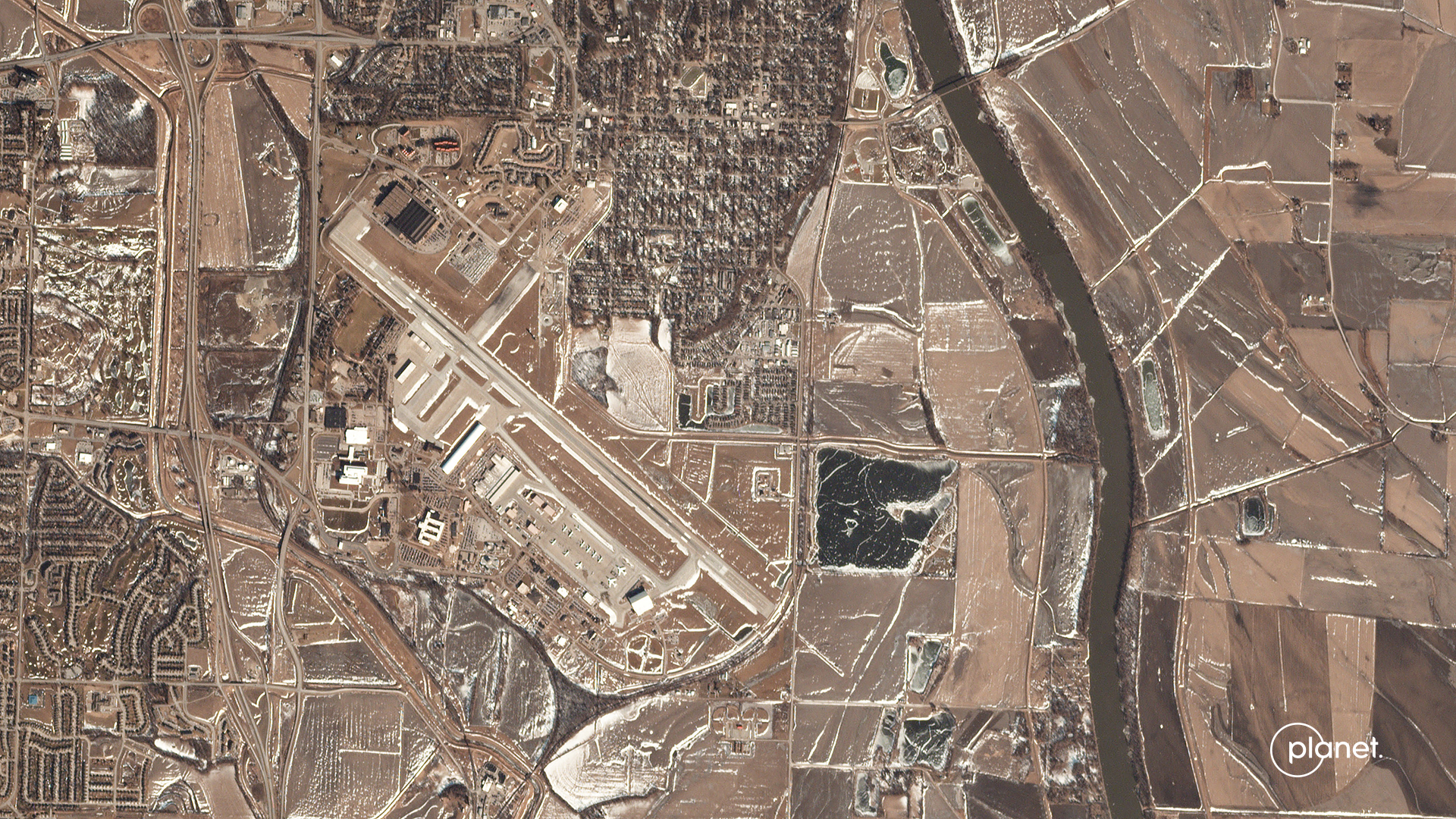 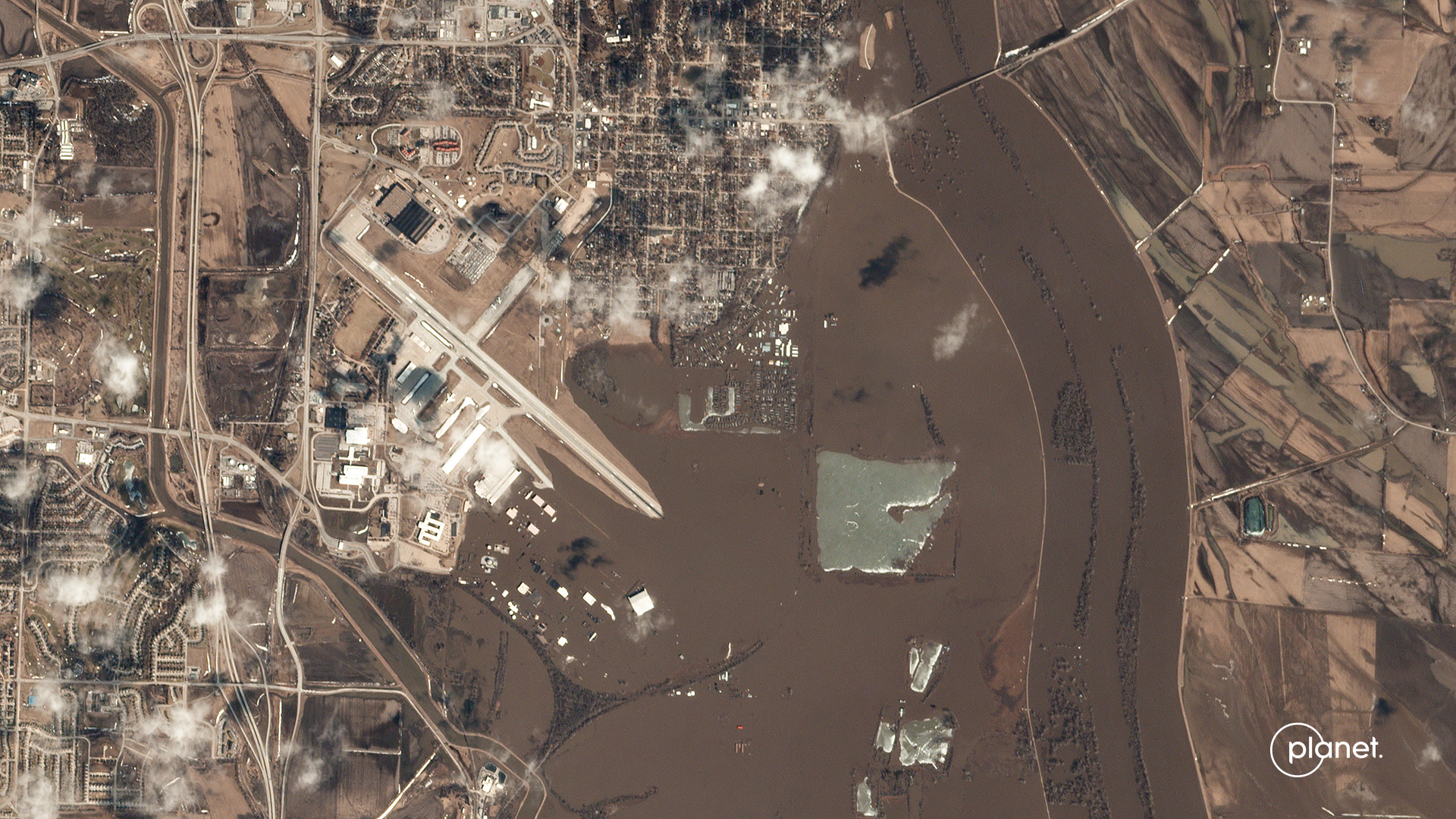 Recovering from the damage

The Nebraska governor and Rep. Don Bacon toured shelters Sunday, talking to displaced residents and evacuees of the floods. Red Cross volunteers are working in more than a dozen shelters across eastern Nebraska and Iowa.

Caught up with one of the families we observed being evacuated, along with their dog and 2 cats, from King Lake on Friday. We also visited the humane society rescue room for displaced animals. Thanks to the volunteers from @RedCross & other orgs! #NebraskaStrong @GovRicketts pic.twitter.com/Jm5ddmn869

As the recovery process begins, NEMA urged residents to keep looking out for loved ones and neighbors.

Warning signs include: increased use of alcohol, tobacco or other drugs; feelings of anxiety, disbelief or numbness; physical reactions such as headaches; and the worsening of chronic health problems.