East Alabama residents rallied around each other amid the destruction spawned by the deadliest US tornado since 2013.

One of the tornadoes that ripped through Lee County was upgraded Monday to an EF-4 after meteorologists determined it brought 170 mph winds and left a track almost a mile wide.

How you can help the tornado victims

The path of destruction from the EF-4 is at least 24 miles long, said Chris Darden, meteorologist in charge at the National Weather Service’s Birmingham office.

The path was likely longer, because the twister crossed into Georgia. Officials there are still assessing the damage, Darden said. He estimated the track was .87 miles wide. Officials said four tornadoes were confirmed in east-central Alabama.

The death toll stands at 23 people, and all of them have been identified with the exception of “six (people) that could not be physically identified by sight,” Lee County Coroner Bill Harris said. Officials are in the process of fingerprinting those individuals in hopes of identifying them, Harris said.

The last tornado with such a high toll was an EF-5 storm in Moore, Oklahoma, that killed 24 people in May 2013.

The youngest, Armando Hernandez, was remembered as “a precious little man that was loved by everyone,” according to his aunt. Taylor Thornton, a fourth-grade student, was described as inquisitive and a positive influence on those around her.

As of noon Monday, there were no more people reported missing, the coroner said, but he said the tallies of dead and missing could rise as search teams make their way into new areas. Crews will be dealing with temperatures in the 30s on Tuesday morning. 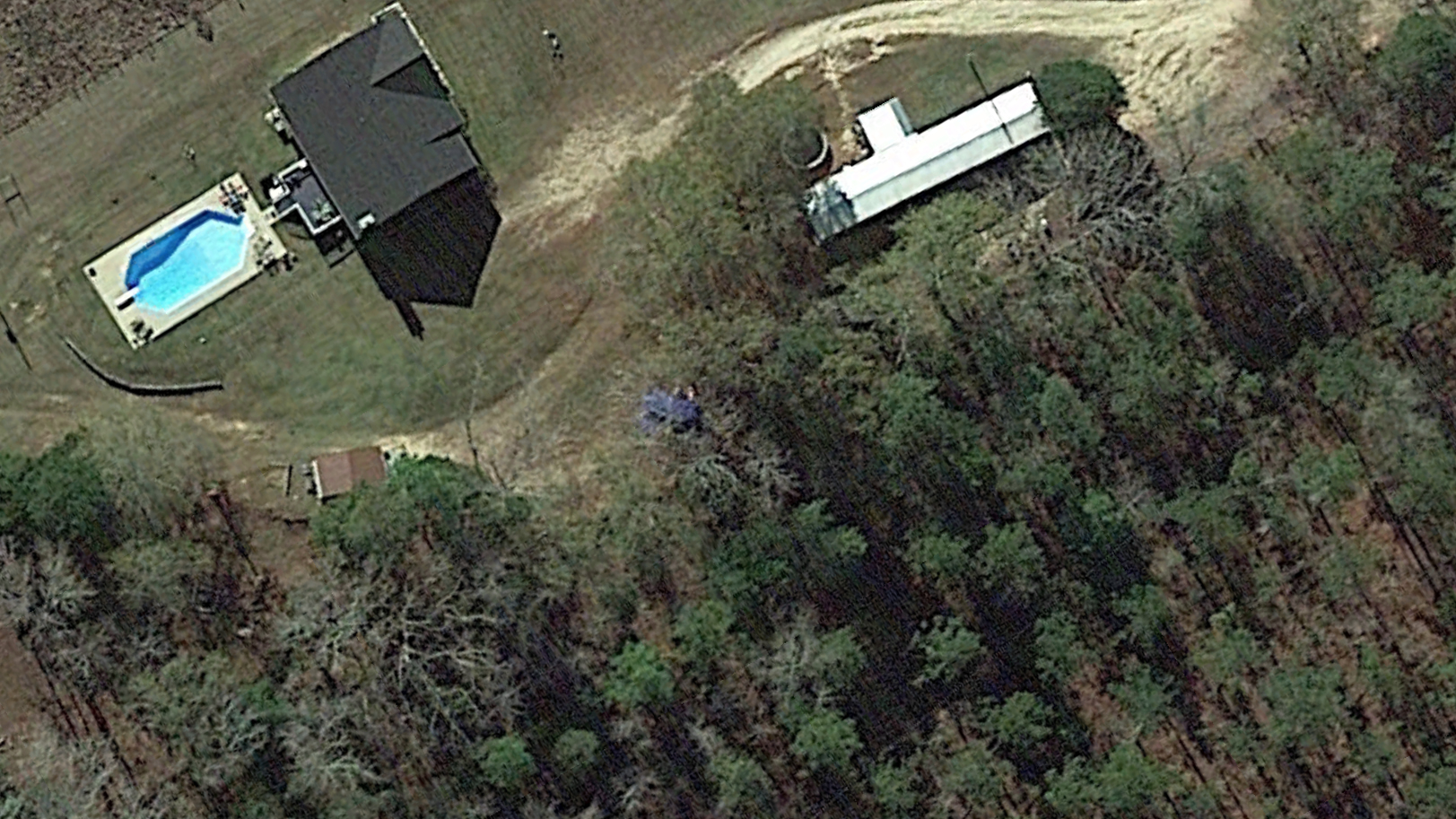 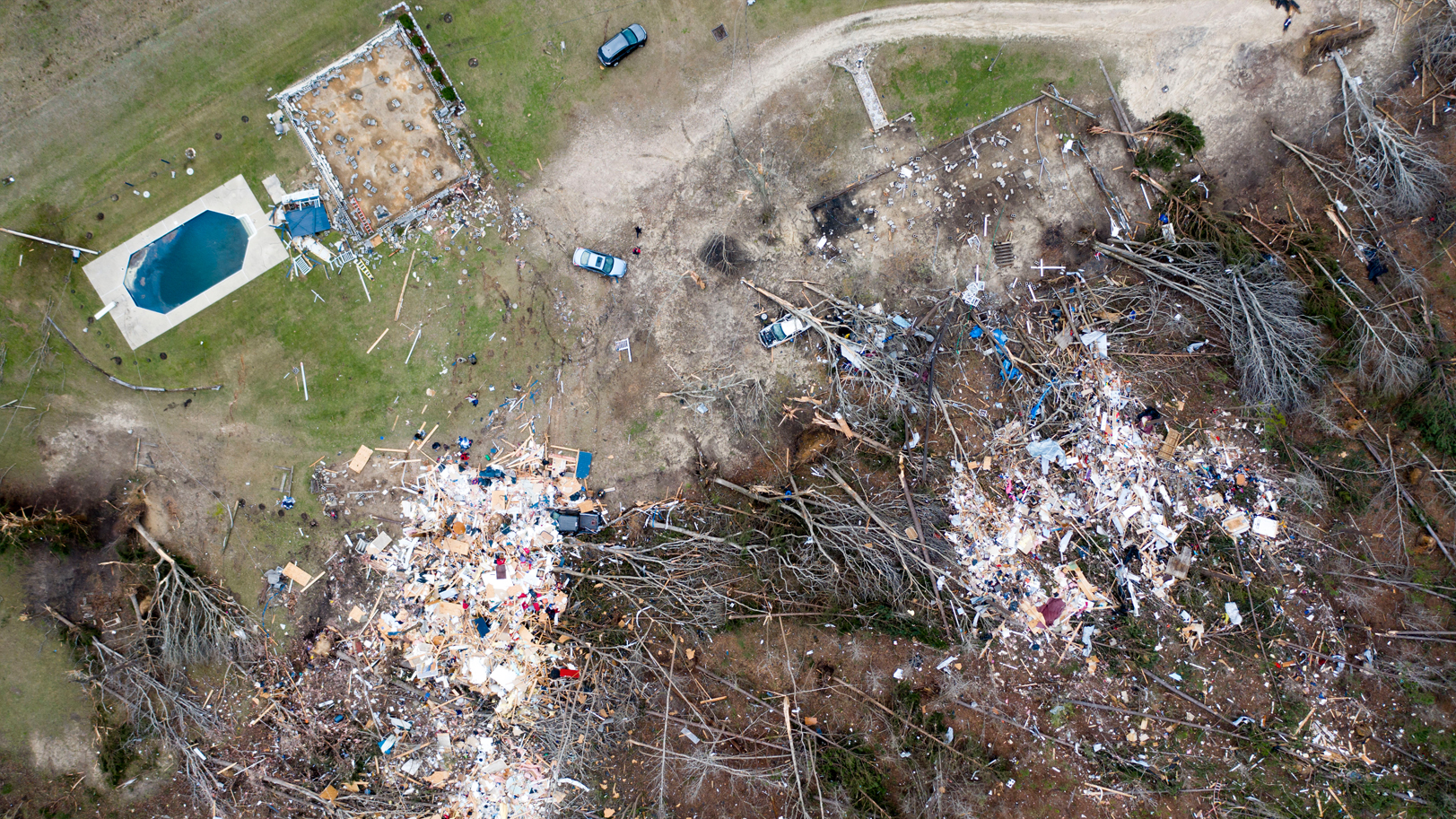 The path of destruction looks “as if someone had taken a blade and just scraped the ground,” Sheriff Jay Jones said.

At daybreak, emergency crews and residents witnessed more of the aftermath that Jones called “catastrophic,” and the search was on for survivors and more victims. Crews are employing dogs, people, drones and “everything we can get our hands on,” he told reporters.

CNN drone footage showed large swaths of flattened trees and houses reduced to a few walls or the foundation.

Stunned survivors recalled close calls and twists of fate that left them or loved ones alive.

Jessica Chandler and her children had gone to the grocery store when the tornado arrived. Her boyfriend had “just enough time to dive to the couch … and he just held onto the couch for dear life.”

It appears that some people had only a five-minute warning Sunday afternoon before tornadoes tore through the region.

According to his counterpart Darden, in addition to the EF-4 tornado, two EF-1s hit the area, one in Lee and Macon counties and another in Barbour County to the south. Tornadoes are measured on the Enhanced Fujita scale – named for the weather researcher who developed it – from 0 to 5 based on intensity and damage caused.

A warning for a second tornado was issued at 3:38 p.m. ET, with the first reports of damage coming 13 minutes later. At least a dozen tornadoes touched down in Alabama and Georgia on Sunday afternoon, according to the weather service.

Here’s how it unfolded:

The 23 deaths mark the deadliest day for tornadoes in Alabama since the Tuscaloosa-Birmingham tornado that killed more than 200 people in 2011.

The victims died in Lee County, Jones said. At least 12 of those deaths occurred in an area about 5 to 6 miles south of the city of Opelika, he said.

The tornado damage is described as "catastrophic."
Tami Chappell/AFP/Getty Images

Though it’s unclear how many people were injured, Jones said some victims are being treated for severe injuries. According to John Atkinson, spokesman for East Alabama Medical Center, the Opelika campus received 60 patients Sunday, but only four remain hospitalized Monday morning. The hospital’s Valley campus received just one victim.

“Thankfully, most were able to be treated and released,” Atkinson said.

A tornado destroying a home, a tornado above a man's home and a third tornado to the left in Bondurant, IA.
Jon Bixler/Facebook

4 tornado safety tips that could save your life

Footage broadcast by WRBL showed trees destroyed by the powerful winds and debris from leveled homes piled up on the side of the road.

“Houses completely destroyed, homes – just basically slabs left where once stood a home,” Jones said. “Massive damage. In specific areas the contents of one residence we know for a fact were located over 1,000 yards away. So we’ve got a very wide storm track that went through the area — may have even been two storms, we’re not sure – but massive damage.”

Smiths Station Mayor Bubba Copeland said the tornadoes leveled about 24 homes and demolished everything in their path, “unbelievable devastation” in such a short amount of time. Twenty-four families are now homeless, he said.

“Something that we experienced was two 12-ton air conditioners that were on top of a school were picked up and thrown 35 feet into a cemetery. That’s as heavy as if a school bus was thrown some 35 feet.”

Gov. Kay Ivey extended the state of emergency that had been issued last month due to tornadoes and severe weather and made a request for a federal major disaster declaration.

President Donald Trump called her on her cell phone and offered his support and condolences, she said.

“We must build back Lee County to its feet,” she told reporters. “Y’all, as your governor, I want you to know I’ve got your back.”

Damage is shown in Alabama after tornadoes touched down.
WRBL

One woman, Delrico Eiland, shared video on Facebook of her 72-year-old aunt Earnestine Reese after her house and daughter’s trailer were destroyed in Beauregard.

In the video, Reese, who suffered a broken hip, is talking on FaceTime to her grandson, Kingston Frazier, who is away at college, Eiland says.

Lashawn Wilson, Reese’s daughter, described the family’s ordeal. They huddled in Reese’s bathroom and “that’s when everything was just taken away.” Wilson recalls her son screaming, “‘I don’t want to do die.’ I told him, ‘Pray your way through, son. You have to pray your way through.’”

A van is upended in front of a damaged home in Lee County, Alabama, on Monday.
Devon Sayers/CNN

Mark Wakefield, Alabama director of the Southern Baptist Disaster Relief, said volunteers are helping with the search effort and he plans to offer chaplain services for first responders and families.

The mayor of Eufaula, Alabama, about 50 miles southeast of Lee County, said that the local airport and an industrial park “were hit pretty hard” and a fire station was taken out. The National Weather Service said that tornado had been upgraded to EF-2.

“We actually were pretty lucky,” Mayor Jack Tibbs told CNN’s Anderson Cooper. “It didn’t hit a populated area.” There were no reports of injuries.

In Talbotton, Georgia, at least 15 structures were destroyed in a tornado, including multiple homes and at least one apartment building, said Leigh Ann Erenheim, emergency management director for Talbot County.

Six people suffered injuries, with the most severe being a possible broken leg, she said. Crews were checking on residents in the outer areas of town and working to open a shelter for people who have been displaced.

Vinton Copeland, pastor at Powell Baptist Church in Talbotton, told CNN people there did not expect a tornado to hit.

“Complete apartments are gone and damaged. We have a shelter at our county high school for those affected. It’s devastating and houses are gone and there are power lines decimated. Tough time,” he said.

Georgia Gov. Brian Kemp declared a state of emergency in Grady, Harris and Talbot counties in the southern part of the state. He was expected to take an aerial tour of affected areas.

This story is developing and will be updated.