Air Force One is in the air and on its way home this morning, after President Trump’s second summit with Kim Jong Un ended early. The President said his talks with the North Korean leader broke down without a deal after Kim insisted the US lift all sanctions on his country. Trump didn’t want to do that. So, a planned working lunch and signing ceremony with the two men was canceled. “Sometimes you have to walk,” the President said in a news conference in Hanoi right before he left town. Click to get the latest updates and analysis on the summit, and check out pictures from Trump and Kim’s meeting.

It’s Day 3 on Capitol Hill for Michael Cohen. The ex-Trump fixer and lawyer will testify behind closed doors today to the House Intelligence Committee. Everyone is still absorbing his explosive testimony from yesterday, when he essentially called the President of the United States a racist conman and criminal. To review, Cohen said:

• Trump inflated his net worth to get on Forbes’ list of richest people, yet deflated it for tax purposes.

• Trump lied about the Trump Tower Moscow negotiations during the campaign because he didn’t expect to win the presidency.

• Trump directed him to pay off Stormy Daniels.

• Trump directed him to threaten schools so they’d never release his grades or SAT scores.

• He didn’t know of any direct evidence that Trump or his campaign colluded with Russia.

So, what happens now, after Cohen presented this mob-like view of Donald Trump’s world? It’s clear that nothing Cohen said yesterday will make Trump’s base or Republicans desert him. And Democrats aren’t set, just yet, to prep articles of impeachment based on the words of this extremely flawed witness. But Cohen’s testimony does provide a road map, of sorts, that Dems can use as they investigate the President. Click for minute-by-minute coverage of the hearing, Cohen’s day in pictures and six takeaways.

Video Ad Feedback
Theatrics aside, here are the moments that matter
04:14 - Source: CNN

Pakistan says it shot down two Indian fighter jets over the disputed border region of Kashmir, in a significant escalation of the crisis between the two nuclear-armed powers. India confirmed the loss of one plane and said it shot down a Pakistani jet. Pakistan claimed to have captured an Indian pilot and published a video of him; India demanded his safe return. The confrontation happened a day after India said it launched airstrikes in Pakistan territory in the first such incursion by Indian air force planes since the India-Pakistan war of 1971. India and Pakistan both control parts of Kashmir, but each claims the region in full.

The latest skirmishes are the most serious crisis over the disputed border area in years. This represents the first big political test for Pakistani Prime Minister Imran Khan, who has only been in office for six months. President Trump, during his news conference in Vietnam, hinted that “reasonably attractive news from Pakistan and India” is coming, alluding to possible US attempts to de-escalate the crisis. Click here for the latest updates on the conflict.

After days of heavy rain, Northern California’s Russian River has turned the town of Guerneville into an island. The river crested last night at over 45 feet (about 13 feet above its flood stage), with the rising floodwaters submerging almost all roads leading into town and essentially cutting off the community of 4,500 residents. About 2,000 homes and buildings in Guerneville have flooded, and 59 people have been rescued. Residents paddled through the streets in canoes and kayaks. The river is expected to start dropping today and tomorrow.

Add this tidbit to the debate over school funding and equity (or lack of it) in public schools: US school districts with mostly white students get $23 billion a year more in funding than districts in which most students are not white. This stunning – but not entirely surprising – information comes from a report by the nonprofit EdBuild, which promotes equity in public schools. EdBuild found the average “white” district got $13,908 for every student in 2016, while “nonwhite” districts got only $11,682 per student. EdBuild blamed this money gap on the way Americans pay for education, with tax dollars controlled locally. EdBuild’s CEO said local governments should rethink how school districts are drawn and noted the funding gap is a vestige of America’s segregated past.

Too cool for school

Talk about a lucky find: A snowplow driver in California found a woman alive inside a car buried in snow.

Sort of a sequel

“Four Weddings and a Funeral” fans, get ready. The gang’s getting back together after 25 years for another wedding.

Check out these photos. No, they’re not some recently unearthed van Gogh paintings. They’re new pics of Jupiter taken by NASA’s Juno spacecraft.

Jupiter's northernmost cyclone, seen to the right along the bottom edge of image, was captured by Juno.
NASA/JPL-Caltech/SwRI/MSSSImage
This jack-o-lantern-esque view of Jupiter is a mosaic of images taken by the Gemini North telescope in Hawaii. The bright spots represent Jupiter's internal heat escaping through holes in the planet's massive cloud cover.
International Gemini Observatory/NOIRLab/NSF/AURA/M.H. Wong/Mahdi Zamani
Part of Jupiter's southern equatorial region can be seen in this image captured by Juno's JunoCam imager. But it's flipped to show the expanse of Jupiter's atmosphere, with the poles to the left and right, rather than top to bottom.
NASA/JPL-Caltech/SwRI/MSSS/Kevin M. Gill
In this image captured by Juno, six cyclones remain stable at Jupiter's south pole. A small cyclone, seen at the bottom right in yellow, has recently joined the party.
NASA/JPL-Caltech/SwRI/ASI/INAF/JIRAM
An artist's impression of a collision between a young Jupiter and a massive, still-forming protoplanet in the early solar system.
K. Suda & Y. Akimoto/Mabuchi Design Office/Astrobiology Center Japan
These dramatic swirls on Jupiter are atmospheric features. Clouds swirl around a circular feature in a jet stream region.
Kevin M. Gill/NASA
Is that a dolphin on Jupiter? No, but it definitely looks like one. It's actually a cloud that looks like it's swimming through cloud bands along the South Temperate Belt.
Brian Swift/Seán Doran/NASA
This composite image, derived from data collected by the Jovian Infrared Auroral Mapper (JIRAM) instrument aboard NASA's Juno mission to Jupiter, shows the central cyclone at the planet's north pole and the eight cyclones that encircle it.
JPL-Caltech/SwRI/ASI/INAF/JIRAM/NASA
This striking image of Jupiter was captured by NASA's Juno spacecraft as it performed its eighth flyby of the gas giant.
NASA/JPL-Caltech/SwRI/MSSS/Gerald Eichstädt
Algorithmic-based scaling and coloring reveal a vivid look at the Great Red Spot in July 2017.
Shawn Handran/NASA
Jupiter's Great Red Spot is a storm with a 10,000-mile-wide cluster of clouds in July 2017.
NASA
Color enhancements offer a detailed look into the Great Red Spot.
Tom Momary/NASA
NASA configured this comparison of its own image of Earth with an image of Jupiter taken by astronomer Christopher Go.
NASA/JPL-Caltech/SwRI/MSSS/Christopher Go
This artist's concept shows the pole-to-pole orbits of the NASA's Juno spacecraft at Jupiter.
NASA/JPL-Caltech/SwRI
This image shows Jupiter's south pole, as seen by NASA's Juno spacecraft from an altitude of 32,000 miles (52,000 kilometers). The oval features are cyclones, up to 600 miles (1,000 kilometers) in diameter. Multiple images taken with the JunoCam instrument on three orbits were combined to show all areas in daylight, enhanced color and stereographic projection.
NASA/JPL-Caltech/SwRI/MSSS/Betsy Asher Hall/Gervasio Robles
An even closer view of Jupiter's clouds obtained by NASA's Juno spacecraft.
NASA/SWRI/MSSS/Gerald Eichstädt/Seán Doran
Jupiter's north polar region comes into view as NASA's Juno spacecraft approaches the giant planet. This view of Jupiter was taken when Juno was 437,000 miles (703,000 kilometers) away during its first of 36 orbital flybys of the planet.
JPL-Caltech/SwRI/MSSS/NASA
This infrared image gives an unprecedented view of the southern aurora of Jupiter, as captured by NASA's Juno spacecraft on August 27, 2016. Juno's unique polar orbit provides the first opportunity to observe this region of the gas-giant planet in detail.
NASA/JPL-Caltech/SwRI/ASI/INAF/J
NASA's Juno spacecraft has sent back its first photo of Jupiter, left, since entering into orbit around the planet. The photo is made from some of the first images taken by JunoCam and shows three of the massive planet's four largest moons: from left, Io, Europa and Ganymede.
NASA/JPL-Caltech/SwRI/MSSS
An illustration depicts NASA's Juno spacecraft entering Jupiter's orbit. Juno will study Jupiter from a polar orbit, coming about 3,000 miles (5,000 kilometers) from the cloud tops of the gas giant.
Caltech/JPL/NASA
This was the final view of Jupiter taken by Juno before the on-board instruments were powered down to prepare for orbit. The image was taken June 29, 2016, while the spacecraft was 3.3 million miles (5.3 million kilometers) from Jupiter.
NASA
NASA's Hubble Space Telescope captured images of Jupiter's auroras on the poles of the gas giant. The observations were supported by measurements taken by Juno.
NASA/ESA/J. Nichols
This artist rendering shows Juno orbiting Jupiter.
NASA
Jupiter and the gaseous planet's four largest moons -- Io, Europa, Ganymede and Callisto -- are seen in a photo taken by Juno on June 21, 2016. The spacecraft was 6.8 million miles (10.9 million kilometers) from the planet.
NASA
Juno made a flyby of Earth in October 2014. This trio of images was taken by the spacecraft's JunoCam.
NASA
Three Lego figurines are flying aboard the Juno spacecraft. They represent the Roman god Jupiter; his wife, Juno; and Galileo Galilei, the scientist who discovered Jupiter's four largest moons on January 7, 1610.
NASA
Jupiter was 445 million miles (716 million kilometers) from Earth when Juno was launched from Cape Canaveral, Florida, on August 5, 2011. But the probe traveled a total distance of 1,740 million miles (2,800 million kilometers) to reach Jupiter, making a flyby of Earth to help pick up speed.
NASA
Technicians use a crane to lower Juno onto a stand where the spacecraft was loaded with fuel for its mission.
NASA
Technicians test the three massive solar arrays that power the Juno spacecraft. In this photo taken February 2, 2011, each solar array is unfurled at a Lockheed Martin Space Systems facility in Denver.
NASA 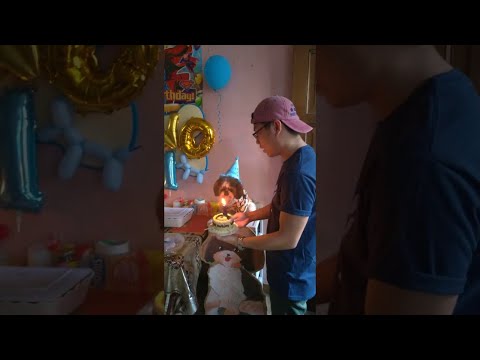 Welcome to Armenia, Colombia, where the locals like Jeeps so much they throw a parade with them. (Click to view)

This Shih Tzu celebrates his first birthday just like the rest of us: surrounded by loved ones and blowing out the candle on his cake. (Click to view.)