5 reasons to be skeptical of Bernie Sanders’ 2020 bid

Bernie Sanders made it official on Tuesday morning: He’s running for president again.

“I am asking you to join me today as part of an unprecedented and historic grassroots campaign that will begin with at least a million people from across the country,” Sanders wrote in an email to supporters, codifying a long-expected candidacy that will aim to bottle the same grassroots energy (and money) that he built during a surprisingly strong and successful 2016 race against former Secretary of State Hillary Clinton.

While most polling suggests Sanders begins the contest in a strong second place behind only former vice president Joe Biden (who has yet to announce his bid) there are a number of questions surrounding Sanders and his campaign that he will have to answer between now and the first 2020 votes next February.

Here are the five that matter most.

1. How will he handle the expectations of being in the top tier?

Sanders started the 2016 campaign as a side show. He was regarded as a wacky lefty with some radical ideas about the country – from his push for single-payer health insurance to his ideas about free college tuition. He drew comparisons to the Democratic version of Ron Paul – nice guy, wild ideas, not to be taken terribly seriously. From that starting point, Sanders had nowhere to go but up – and up he went, developing into not only a legitimate challenger to Clinton but also a voice for the rising liberal base in the party.

Why 2020 will be harder for Bernie Sanders | With Chris Cillizza 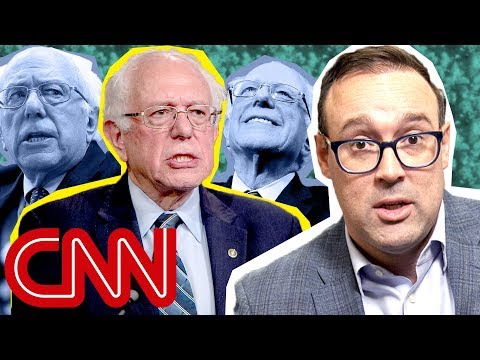 In 2020, Sanders won’t benefit from those low expectations. He may not be the frontrunner in the race, but he absolutely – if polling is to be believed – starts in the top tier. Sanders has never been a frontrunner sort of guy, so this will all be new to him. He will no longer get credit for leaping over low expectations. In fact, he is much more likely to struggle with high expectations. What happens, for instance, if polling this fall shows Sanders in sixth place in Iowa? Or third place in New Hampshire? How does he and his campaign react to that?

2. How will he withstand more scrutiny and more attacks?

One of the secrets to Sanders’ success in 2016 was that no one – most especially Clinton – thought he had any chance of going anywhere in the race. Clinton largely ignored him for the better part of 2015, allowing some problematic parts of Sanders’ record for Democrats – most notably his voting record on guns – to go unnoticed. (When the race began to tighten, Clinton gently prodded Sanders on guns and health care.) Sanders, too, largely flew under the radar of investigative reporters for major news outlets who were busy looking into Clinton, Jeb Bush, Marco Rubio and others seen as more viable candidates. (That reality clearly benefited Donald Trump in the early days of the campaign, as well.)

Sanders will get no pass – from either the media or his fellow candidates – this time around. He is among the frontrunners – and will be treated as such. His wife’s time as president of Burlington College could well come up. And his opponents will do a deep dive into his nearly 30 years of votes as a member of the House and Senate. This is all very normal stuff in a campaign. But not for Sanders.

3. Does it matter that he’s not really a Democrat?

Yes, I know that Sanders has always caucused with Democrats in the House and Senate. And that his policies quite clearly line up with the policy prescriptions of the Democratic Party. But if that’s all true, then why does Sanders feel the need to be an independent and describe himself as a democratic socialist? And in a field in which there will be lots and lots (and lots) of options for liberal voters, will they really choose someone who has spent almost his entire adult life as something other than a Democrat?

There is zero question that Sanders has already had a profound impact on the Democratic Party – even if he’s not technically been a Democrat all that time. In 2016, Clinton laughed at Sanders’ “Medicare for all” proposal. Now it is the default position of the 2020 frontrunners – with only Biden resistant to endorsing it.

But Sanders won’t have the liberal lane to himself in this race like he did in 2016. In fact, the liberal lane is stuffed full of candidates – all of whom sound a hell of a lot like Sanders on policy. (This is not an accident.) Can Sanders win on a well-yeah-but-I-was-here-first argument? Or does he need something more, something beyond the ideas that energized his 2016 campaign? In interviews setting up this second candidacy, Sanders sounds exactly like he did in 2016: “Our campaign is about transforming our country and creating a government based on the principles of economic, social, racial and environmental justice,” he said on Tuesday. Is that enough for voters with a lot more choices this time around?

5. Does the Democratic Party want a 77-year-old white male as its nominee?

In the 2018 midterm elections, the increasing diversity of the Democratic Party was on full display. From the bevy of women elected to the House to the history making victories for two Muslim women and two Native American women to the candidacies of people like Stacey Abrams and Andrew Gillum, the message was clear: The Democratic Party’s base is getting more female, more liberal, less white and younger.

Aside from the “more liberal” thing, Sanders doesn’t fit any of those categories. At 77, he will be the oldest candidate in the field on either side. (Biden is 76.) Sanders simply doesn’t look like the Democratic Party that scored across-the-board victories in 2018. What he does look like – demographically speaking – is the current occupant of the White House. Do Democrats want to nominate an older white man to run against an older white man in 2020?