War on e-cigarettes: Hong Kong intends to jail vaping offenders. But will it make people quit?

Robert Chan lit his first cigarette aged 18. He quickly became hooked, smoking 15 a day for more than a decade.

Like so many other smokers, Hong Kong-based Chan didn’t savor his addiction. He wanted to quit smoking cigarettes, but struggled to end his nicotine habit.

Two years ago, on his 30th birthday, Chan started using a device that heats tobacco – instead of burning it – to release a nicotine-laced vapor.

Chan is one of the 35 million people around the world believed to be using e-cigarettes or heat-not-burn products, according to Euromonitor.

“I wanted to stop smoking but I wasn’t quite ready to quit nicotine yet,” he says. “I saw this as a bridging device to do something less harmful than cigarettes … There’s no ash, no smell and my lungs and breathing feel better when I use it.”

But today that industry is facing a battle. While many smokers are embracing alternative devices in an attempt to quit cigarettes, governments around the world are divided.

This month, the Hong Kong government announced plans to push ahead with a controversial blanket ban on all e-cigarettes and heat-not-burn products.

Under the sweeping draft law, which begins its path through the legislature on February 20, anyone who imports, makes, sells or promotes new smoking products could face six months in jail or a HK$50,000 ($6,370) fine.

Chan says that legislation will make him choose between between becoming a criminal or doing something that’s worse for his health.

“This is either going to send people back to smoking real cigarettes or drive the whole industry underground to a black market,” he says.

In 2003, Chinese pharmacist Han Li filed a patent for “a flameless electronic atomizing cigarette,” in the manufacturing heartland of Shenzhen, just across the border from Hong Kong.

A year later the world’s first e-cigarettes hit the market in China, and within 12 months they were being shipped around the world. E-cigarettes were seen as an enjoyable and safer smoking alternative – an important product in a country like China where more than 50% of adult males still smoke and lung cancer is the leading cause of death.

The technology works like this: a small lithium battery atomizes a liquid solution of nicotine to produce a fog which looks like cigarette smoke. When smokers inhale they get a similar sensation to puffing on a cigarette, but industry players claim the products can be 95% safer than burning tobacco.

The World Health Organization has cautioned that the long-term effects of vaping are unknown, and the nicotine they contain is addictive.

Today the United States is the world’s biggest e-cigarette and heat-not-burn market, worth $5.1 billion last year, followed by Japan and the United Kingdom, according to Euromonitor.

The products have widely been lauded as a way to wean people off traditional smoking. A study published earlier this month by the New England Journal of Medicine showed that e-cigarettes helped people quit smoking at double the rate of those using nicotine replacement therapy.

But consider this: of the 3 million people using the devices in the UK, only half are ex-cigarette smokers. And in the US, popular e-cigarette brand JUUL – which has 75% of the market – has come under fire for adding sweet flavors to its “e-liquids” that supposedly appeal to young people. Vaping has become so ubiquitous in many American high schools that the US Food and Drug Administration has called it an “epidemic.”

So are the products a pathway to giving up smoking, or merely an alternative gateway to nicotine?

The FDA is considering drugs to help kids quit vaping.

For the Hong Kong government, protecting young people from vaping is more important than giving smokers an alternative to traditional tobacco products.

“These products are being marketed as trendy products to attract youngsters who don’t already smoke,” said Antonio Cho-shing Kwong, chairman of the Hong Kong Council on Smoking and Health, which lobbied the government for the proposed ban.

“The smoking prevalence for secondary school children in Hong Kong is 2.5%. With a rate that low, anything that would attract youngsters is dangerous.”

A spokesperson for the Hong Kong Food and Health Bureau said it considered all alternative smoking products “a gateway to the eventual consumption of conventional cigarettes,” and noted that “all these new smoking products are harmful to health and produce second-hand smoke.”

Under the ban, citizens can smoke their current supplies at home. But once those run out, buying alternative smoking products will pose a legal challenge.

The world is divided over e-cigarettes.

Currently, 39 jurisdictions have outlawed alternative smoking products outright, including Brazil, the United Arab Emirates and Thailand. In Australia, e-cigarettes not containing nicotine are legal to buy – although such products are rare. The UK and US have ruled sale of e-cigarettes to adults is legal. The debate over whether or not to ban e-cigarettes is still rumbling in the Philippines.

Legislation and regulation has been slow to catch up with the industry as new products such as heat-not-burn devices, including the Iqos produced by tobacco giant Philip Morris, have entered the market.

Iqos technology is different from the e-cigarettes conceived in Shenzhen. The device heats rather than burns a stick of tobacco, which the company claims is 90% less harmful as it produces far fewer carcinogens. 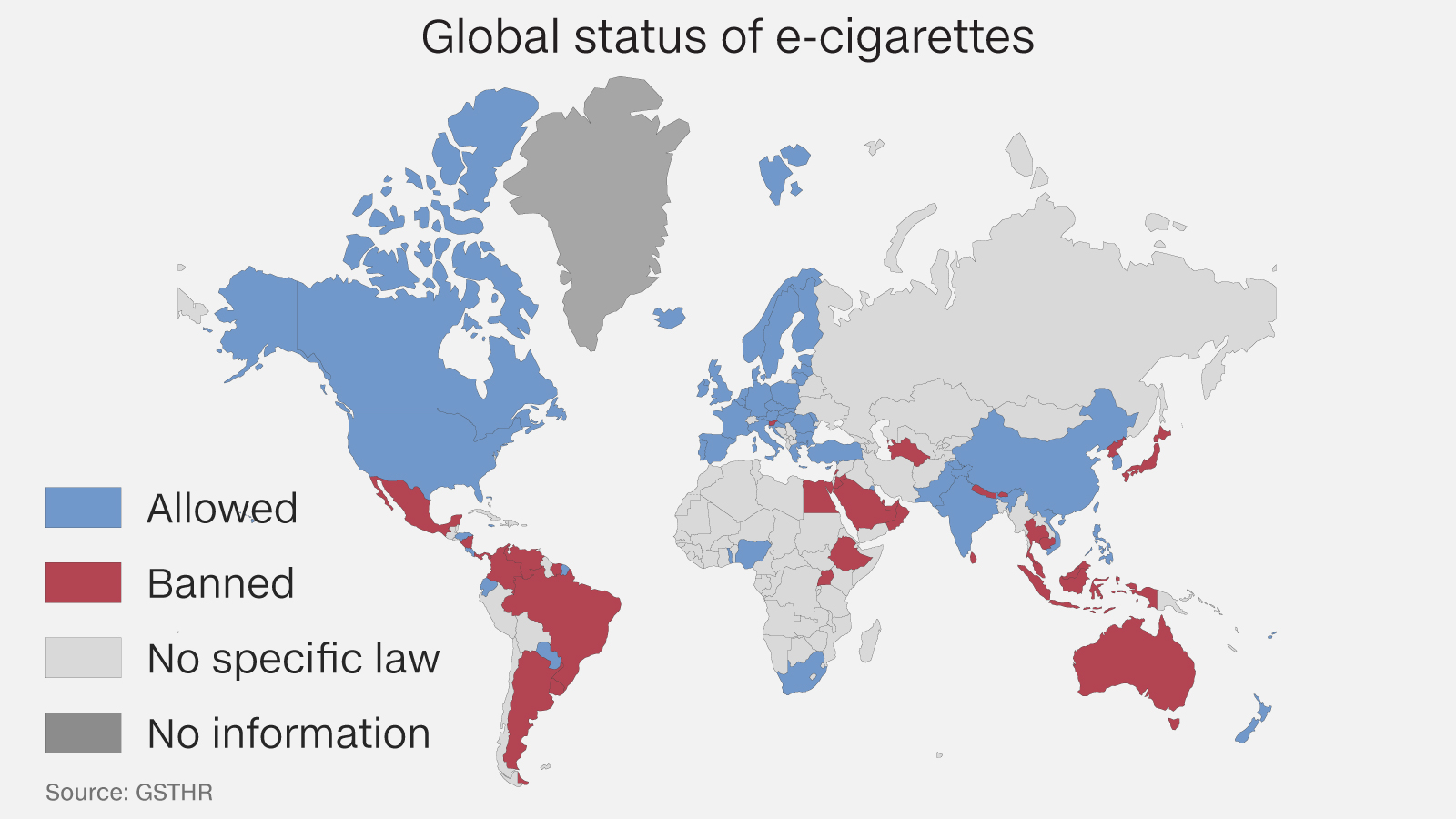 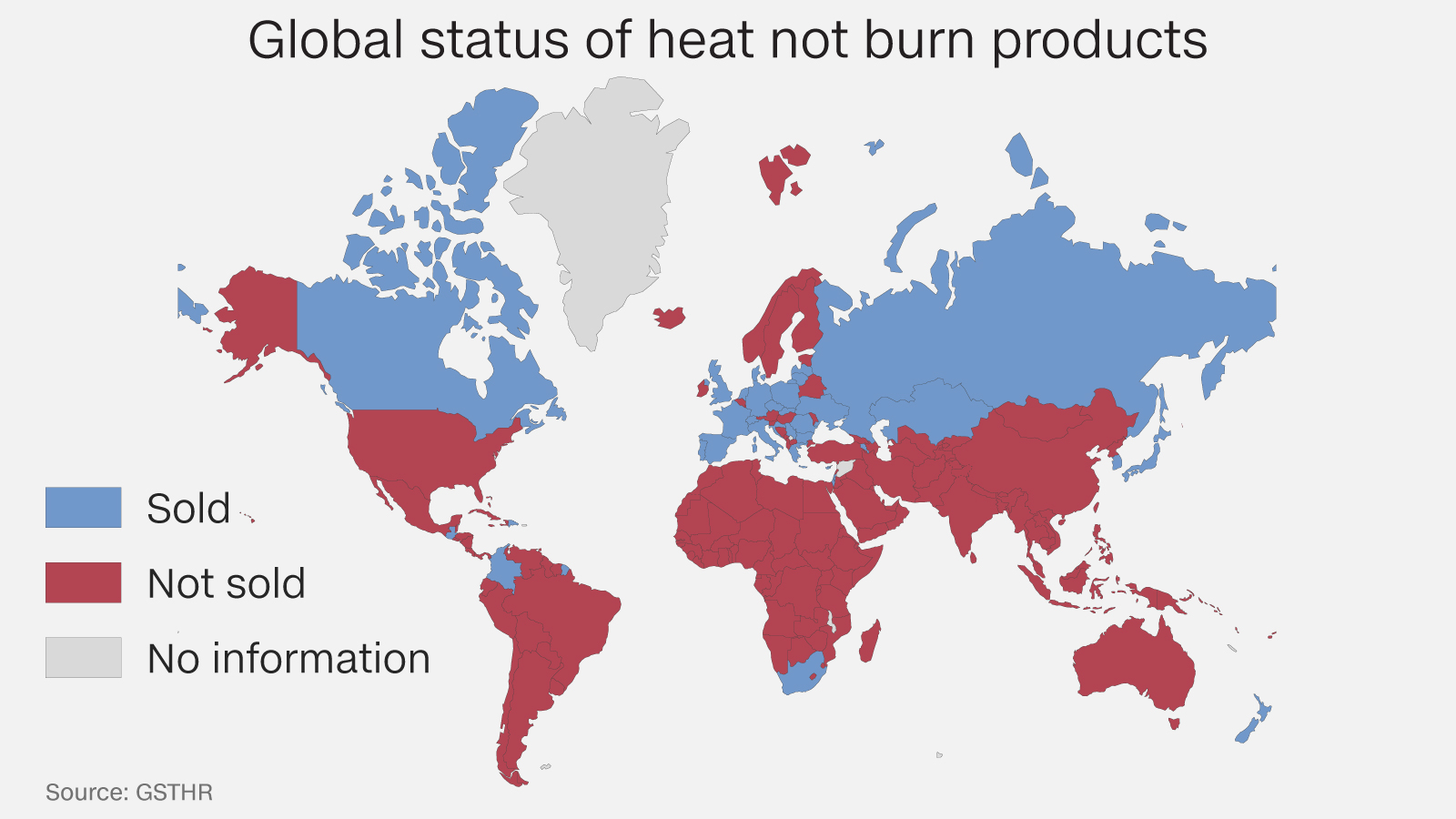 “The Hong Kong legislation has wrapped everything into one: e-cigarettes and heat-not-burn, but the government has to understand the difference between what the two are and how they could regulate them,” says Brett Cooper, general manager of Hong Kong and Macau for Philip Morris.

In Japan, where 34% of people still smoke, nicotine e-cigarettes have been banned – but the Iqos is legal, and a runaway success.

“One in five people have switched from cigarettes to these alternative products in Japan,” says Cooper, noting that Iqos accounts for 15% of the tobacco market in Japan, where 3 million people use the device.

With the new legislation, Hong Kong is showing that it is opposed to “innovation, technology and emerging science,” Cooper adds.

CNN
An Iqos cafe in Andorra.

Nav Lalji has a difficult job. He is chairman of the Asian Vape Association, a group formed in 2015 to unite vapers in the region. However, it has since become a defensive body, as Singapore, Thailand, Malaysia and Japan have all outlawed e-cigarettes.

A former smoker who quit cigarettes for vaping, Lalji says he is “devastated” by the Hong Kong government’s decision – especially when other tobacco products, which kill more than 7 million people a year globally, will be left on shelves.

Lalji believes the ban in Hong Kong is simply going to turn smokers of e-cigarettes and heat-not-burn products into criminals.

“The thing is we’re located in Hong Kong which right next to Shenzhen, the hub and heartland of manufacturing e-cigarettes,” says Lalji, adding that the Chinese mega-city makes 95% of the world’s e-cigarette supply.

“So if anybody in Hong Kong can’t procure them legally, they could simply go across the border to China to pick them up, or order online.”

For others, the proposed law threatens to move Hong Kong into nanny state territory.

“The ban goes against a few values that I hold dear: freedom of choice as a consumer and freedom to get access to less harmful products,” says Brice L, a French expat living in Hong Kong who asked that CNN did not use his last name due to the legal sensitivities surrounding e-cigarettes.

​”Overall, it feels like the Hong Kong government is going backwards – and I don’t understand the reasoning behind it.”