Thursday is a big day for Alexandria Ocasio-Cortez. The New York freshman Democrat, who has rapidly become one of the biggest stars in her party, will formally introduce her much-touted “Green New Deal” – a package of legislation aimed at, among other things, addressing the threat posed by climate change.

Nancy Pelosi isn’t all that impressed. Asked about the “Green New Deal” in an interview with Politico on Wednesday, Pelosi dropped this amazing bit of shade on it:

“It will be one of several or maybe many suggestions that we receive. The green dream, or whatever they call it, nobody knows what it is, but they’re for it, right?”

Pelosi knows exactly what she’s doing here. Her utter dismissiveness of the “Green New Deal” – and, by extension, AOC, who is the member most closely identified with it, is entirely intentional.

Pelosi knows that AOC is a rising national power – particularly among the most activist and liberal left. Given Ocasio-Cortez’s profile – and her influence among young, liberal members – Pelosi knows she can’t just ignore what the New York Democrat says and does. But she isn’t going to kowtow to AOC either.

Earlier this year, Ocasio-Cortez was passed over for a spot on the powerful Ways and Means Committee despite the fact that Joe Crowley, who she beat in a primary last summer, had a seat on Ways and Means. That decision didn’t come by accident – and it didn’t come without Pelosi knowing about it and likely directing it. 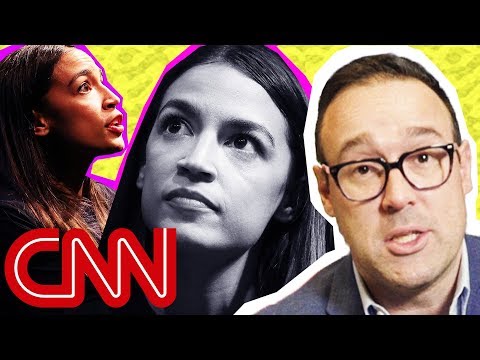 On climate, in particular, Pelosi’s umbrage about the “Green New Deal” – and AOC – is likely rooted in the fact that the California Democrat has long been a leading voice on global warming and climate change issues. (She referred to it as her “flagship” issue in the Politico interview.)

The idea that because Ocasio-Cortez has lent her name and support to the “Green New Deal,” then Pelosi has to suddenly change her legislative plans on how to address climate change, is anathema to Pelosi. (One wonders whether AOC’s decision to participate in a sit-in at Pelosi’s office during new member orientation late last year to draw attention to the “Green New Deal” didn’t sit too well with the speaker either.)

Asked about the proposal on Thursday, Pelosi struck a less dismissive tone.

“Quite frankly I haven’t seen it, but I do know that it’s enthusiastic, and we welcome all the enthusiasm that’s out there,” she said at her weekly news conference. “I’m very excited about it all, and I welcome the Green New Deal and any other proposals.”

None of this necessarily suggests that there is an any animosity between Pelosi and Ocasio-Cortez. Rather, what Pelosi’s comment about the “Green New Deal” represents is that the speaker wants to make very clear how things work in the House. AOC may be a star nationally, but in the House she is just a very junior member of Pelosi’s majority – albeit it one with a larger-than-normal megaphone on issues close to her.

Very junior members don’t have any expectation that the leadership will take up their pet issue or cause or legislation. That Ocasio-Cortez has millions of Twitter followers matters something close to not at all in Pelosi’s decision-making on how to proceed on climate change legislation.

Pelosi’s response to Politico was designed to make that very clear.