President Donald Trump delivered his State of the Union address Tuesday night, a speech that was, in equal measure, surprisingly bipartisan and deeply divisive – reflective of the deep contradictions that sit at the heart of his presidency.

Within just a few paragraphs, Trump swerved from calls for unity and shared victory to blasting Democrats on their opposition to his proposed border wall. In one breath, he touted the low unemployment rate. In the next, he insisted that if Democrats wanted peace and prosperity, then they could not carry on “partisan investigations.”

It was vintage Trump – in all its incongruity, unpredictability, exaggeration and occasional moments of surprising grace.

I watched the speech (all 82 minutes of it) and took notes. My initial takeaways are below.

1. Trump started on a bipartisan note, but …

In advance of the speech, administration officials pushed the idea that Trump would extend an olive branch to Democrats and urge the two warring parties to come together for the good of the country.

And he started on just that note. “There is a new opportunity in American politics, if only we have the courage to seize it,” the President said in the speech’s earlier moments. “Victory is not winning for our party. Victory is winning for our country.”

Which is a great sentiment! 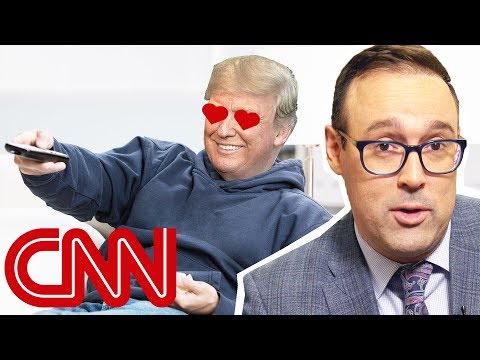 The problem, of course, is that Trump is a deeply flawed messenger on the whole “unity” thing. A pitch like this one – “We must reject the politics of revenge, resistance and retribution – and embrace the boundless potential of cooperation, compromise and the common good” – could work if spoken by someone who, well, is not Trump.

He literally turned the “politics of revenge, resistance and retribution” into an art form during the 2016 campaign. To turn suddenly and ask the assembled Congress to put aside nasty rhetoric and name-calling feels a little pot-calling-the-kettle-black-ish.

And even as he called for unity, Trump repeatedly cast Democrats as obstructionists bent on open borders and unwilling to condemn voices within their party making extreme remarks on abortion.

The line likely to be quoted most – especially by Trump’s critics – from the speech was this one: “If there is going to be peace and legislation, there cannot be war and investigation. It just doesn’t work that way.”

The logic here, while strained, goes like this: If you want economic prosperity, you can’t investigate the President. One doesn’t work with the other.

It’s also a line that evokes a less-than-ideal comparison for Trump. “I believe the time has come to bring that investigation and the other investigations of this matter to an end,” said then-President Richard Nixon in his 1974 State of the Union speech. “One year of Watergate is enough.”

It was hard to miss the large number of Democratic women sitting together on the House floor wearing white in honor of the suffragette movement. (A record number of women were elected to Congress in the 2018 election.)

And that group of women provided the most surprising – even for Trump – moment of the night. In touting his economic successes, Trump delivered these lines:

He was repeatedly interrupted by cheers as the women – almost exclusively Democrats – slapped five and hugged to celebrate their momentous accomplishment. “You weren’t supposed to do that,” Trump joked.

The celebration of the record number of women in Congress morphed into a “USA! USA!” cheer that – gasp – the entire chamber soon took up. Trump clearly loved every second of it – despite the fact that many of the women elected in 2018 were not only driven to run but spurred to victory by their opposition to him and his policies. “That’s great, really great,” he said. “And congratulations, that’s great.”

It was a nice moment – for all parties. And a rare one, in both this speech and our broader politics.

4. The case for a national emergency on the border was made

Trump pointedly did not say that he would declare a national emergency on the southern border if Congress could not come to some sort of compromise before February 15.

But he laid the groundwork for why his hand would be forced if and when the time comes. “The lawless state of our southern border is a threat to the safety, security and financial well-being of all Americans,” Trump said at one point. At another, he described the “very dangerous southern border.” At still another he painted a picture of cities in Mexico loading undocumented immigrants in trucks and buses to bring them closer to unsecured parts of the US border.

To the extent there was any sort of unifying theme to this speech – and you really have to dig hard for one – it was Trump making the case that the country is under a grave threat from illegal immigration, and that if Congress won’t act, he will.

“In the past, most of the people in this room voted for a wall – but the proper wall never got built,” Trump said. “I’ll get it built.”

Part of the SOTU is the reactions from the opposition party. And with Trump in the White House and the 2020 Democratic race already in full swing, it was prime season for reaction shots of Democrats deeply disgruntled about Trump’s pronouncements.

There was the eye roll from New York Sen. Kirsten Gillibrand (D). The mouth-twisting dismay from California Sen. Kamala Harris (D). Senate Minority Leader Chuck Schumer’s seeming expletive at a Trump claim. And then there was Speaker Nancy Pelosi’s golf clap for Trump – a slapping of hands together that has already become a meme.

For Democrats, these reactions will set off waves of elation. For Republicans, they will be seen as reflections of a party unwilling to ever give the President the benefit of the doubt. For the rest of us, it’s a reminder that a) one speech doesn’t change people’s views and b) the SOTU is one big TV show.