How to watch the Super Bowl and actually keep up

Hello sports fans, are you ready for the Big Game? The Football Sunday? The Aggressively Trademarked Super Gameroo?

If you’re counting down the hours to the game, or are just going to watch out of some sense of American obligation, here’s everything you need to know about how to watch, where to watch, and who to watch.

Sorry, you’ll have to come up with your own “why.”

How can I watch the Super Bowl?

First of all, it all goes down at 6:30 p.m. ET in Atlanta (or your living room or local public house of choice).

If you’re watching on a plain old television like the Cleavers, you can catch the game on CBS or on its streaming app. However, since this is 2019, people will also be looking to stream the game. According to a Sports Illustrated report, 15% of watchers — and 33% of watchers between the ages of 18 and 24 — will be using some kind of streaming device.

The New England Patriots, of course, because they are constitutionally obligated to do so. Their challengers this year will be the Los Angeles Rams.

Los Angeles has a football team? I bet they’re excited!

Los Angeles actually has two football teams now – which, if you’re keeping score, is two more than they had just a few years ago. The St. Louis Rams moved their franchise there in 2016, and the San Diego Chargers assimilated into the growing LA sports behemoth a year later. As far as excited goes, we can’t say for sure whether residents in LA have even noticed all of the football happening around them. We do know, however, that the fans in St. Louis are not excited that the team that literally just deserted them is now playing for all the marbles.

They are not excited at all.

Where is the game being played?

The Super Bowl is going to be played in Atlanta in the Mercedes-Benz Stadium. MB Stadium, a 300-foot-tall loaf of challah bread, is the regular season home of the Atlanta Falcons and boasts the largest bird sculpture in the world. Marvel at its glory:

MB Stadium has been open only since 2017, when it rose unbidden out of the ground like a volcano. However, Atlanta has already played host to two other Super Bowls; one in 1994 and another in 2000, when the Rams, then from St. Louis, beat the Tennessee Titans. Does that give the Rams a slight edge this year? Who knows. Lay your queries at the feet of the giant bird statue.

Is the roof going to be open?

The defining feature of MB Stadium, that fat steel tarantula crouched over downtown Atlanta, is its fancy retractable roof. According to the latest word from NFL officials, the roof IS expected to be open for Sunday’s game.

Go ahead, use your eye sphincters and watch the roof opening and closing. 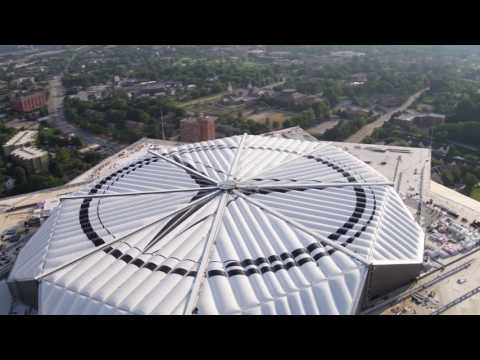 It’s alarmingly biological. It looks like a tardigrade. Whoever built that knew exactly what they were doing.

OKAY ANYWAY who are the quarterbacks?

Who is the quarterback? Of the Super Bowl? That’s like asking the color of the wind or the sound of silence. Breathe in the timeless truths of nature itself and nature will reward you by whispering in your ear: Tom Brady.

Tom Brady isn’t a man so much as he is a feeling; an energy. Tom Brady is a Peloton bike in the middle of a succulent-lined courtyard in Sedona. Tom Brady is a $200 cookbook bound in laser-etched natural wood in which all of the recipes contain mugwort or yam powder.* The spirit of Tom Brady is stitched into every men’s size L cowl neck sweater. Tom Brady will live forever; in your hearts, and in your minds, and apparently in the Super Bowl.

The other guy is Jared Goff.

*This is actually what Tom Brady’s cookbook is like.

Jared Goff will also be there!
Jonathan Bachman/Getty Images

Yes! That is Sean McVay, head coach of the Rams. People will be talking about him a lot. And if there were ever a challenge to the Patriots’ seemingly immortal dynasty, it is he. Sean McVay is YOUNGER than Tom Brady, in human years, yet is responsible for coaching an entire professional football team. In fact, when he became head coach of the Rams in 2017 at the tender age of 30, he was the youngest head coach in the modern NFL EVER. If the Rams win this thing, rest assured that this young challenger will be at the center of the ensuing interregnum.

Who’s doing the halftime show? Is it yet another factory-issued handsome guy?

It is! Or rather, it’s a group of them. Here’s a fun fact: In the music business, a group of handsome pop musicians is called a Maroon 5, like a murder of crows or a herd of elephants.

Every strong and self-sustaining Maroon 5 has an alpha handsome musician, and in this case, it’s Adam Levine. Despite their strength, on game night you may want to approach the Maroon 5 slowly and speak in soothing tones, as an ongoing, multi-pronged cultural controversy over who should and should not headline the Super Bowl halftime show may have made them skittish. If they feel comfortable enough in their habitat, they may reward patient Maroon 5 watchers with their signature mating call: Adam Levine saying “yeah” over and over again in falsetto for three minutes straight.

You know things are running hot when MAROON 5 is controversial.
Christopher Polk/Getty Images

Rapper Travis Scott will also perform, as will two of Atlanta’s most esteemed musical ambassadors: Outkast’s Big Boi will round out the halftime lineup, and the anthem will be performed by the Empress of Soul, the Queen of Tears and Waffles herself, Gladys Knight.

Fly us to heaven on the back of a bald eagle, Gladys!
Kevin Winter/Getty Images North America/Getty Images For dcp

That all sounds great. So why does no one seem really excited about the Super Bowl this year?

No, you’re not imagining it. There really does seem to be a cloud of apathy over The Big Game this year. StubHub has reportedly said ticket sales have been lagging leading up to Super Bowl weekend, and, let’s face it, the only people who really want to see another Patriots Super Bowl win are Patriots fans and people from St. Louis who are out for revenge.

Regardless, I am excited about the commercials because I enjoy watching celebrities who are paid to tell me what things to buy

Why not go ahead and watch them now? Honestly, you may want to prepare yourself, because by the time the Backstreet Boys start dancing on your screen in celebration of spicy Doritos, you’ll think you Super Bowled yourself directly into a different dimension.

I think I’ve heard enough. Do the Rams, by chance, have a glorious vintage hype song you can use to play me off?

We’re so glad you asked.