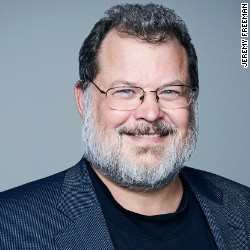 For Lt. Gen. Richard “Rich” Scobee, losing his father in the explosion of the space shuttle Challenger was a personal tragedy he and the families of other members of the crew have shared with the nation for 33 years.

“If you have ever lost somebody that you loved, it’s that exact feeling,” Scobee told CNN this month, as the anniversary approached. “I just shared my loss with the country. I think it’s my responsibility to share some of that – because it’s part of our history.”

On January 28, 1986, Scobee was about to graduate from the Air Force Academy when he joined his mother and the other crew members’ families in Florida to watch his father, mission commander Dick Scobee and six other astronauts blast off aboard Challenger.

He remembers standing on the roof of NASA’s launch control at the Kennedy Space Center and being excited that the crystal clear sky would offer a perfect view of the separation of Challenger’s solid rocket boosters.

Seconds after liftoff, “I knew something was wrong immediately,” Scobee recalls. “I looked at my mom and she had figured that out too.”

Watching his mother, June, go through it was horrible memory that has never left him.

“After all these years it’s still tough to recall – the sadness in her eyes.”

Her career as an English professor helped her bond closely with the civilian member of Challenger’s crew, Christa McAuliffe.

The world remembers McAuliffe as NASA’s first “teacher in space.” Students in countless classrooms watched in horror that day as the disaster unfolded on live TV.

After an investigation, the explosion was blamed on a seal inside a rocket booster which leaked due to cold weather. Hot exhaust escaped through the seal and ruptured the shuttle’s external fuel tank, triggering an explosion.

The horrifying public aspect of the tragedy sometimes overshadows the rest of Dick Scobee’s life. “Everyone saw how my father died and they saw the end of his career,” his son said. “What they didn’t see was his life – which was amazing.”

From mechanic to astronaut

Dick Scobee started his Air Force career as an engine mechanic and worked his way through school and the military to become an officer, combat pilot and test pilot before winning a spot in NASA’s astronaut corps.

“Going from turning wrenches on a flight line to commanding a space shuttle – no country in the world could you do that except for this one,” Rich Scobee said.

Dick Scobee’s leadership qualities were legendary among his colleagues. “That guy would make you feel good about you,” his son recalled. “He just had a way of making you feel successful.”

In the years after Challenger, Rich Scobee embarked on his own military career as an F-16 fighter pilot. Eventually he would see combat in the Persian Gulf War, become a squadron commander and, later, commander of Kirkuk Air Base in Iraq.

Scobee said his father taught him important life lessons that have been useful throughout his career. Along the way, Rich Scobee and his wife Janis found time to raise a family of their own, including two sons and a daughter.

“The Reserve exists to capture the talent of trained airmen who are leaving the active Air Force, but who still want to serve part-time,” Scobee said. It allows the Pentagon the ability to quickly increase air power if needed, by using Reserve units.

The future of American space exploration

Appropriately, Scobee’s command will indirectly intersect with NASA later this year. Air Force Reserve units are scheduled to provide support for the first astronaut launches from Florida since the demise of the shuttle program in 2011.

The astronauts are scheduled to blast off from Florida later this year to test two different capsules for human spaceflight – Boeing’s Starliner and SpaceX’s Dragon.

Assigned to those missions will be Air Force Reserve “Guardian Angel” pararescue teams with the 920th Rescue Wing – to respond to possible emergencies during launches or landings.

Scobee, who grew up talking about this subject with his father often, believes space exploration is important and the United States should assume a leadership role.

“We have to take a rightful place as leaders in space. We can’t let that go,” Scobee said.

He supports the idea of sending astronauts to Mars. “Although space is dangerous – as explorers we need to go because we don’t fully understand things until one of us touches it,” he said.

“Manned space flight is really important to who we are.”