Editor’s Note: James Griffiths is a Senior Producer for CNN International and author of “The Great Firewall of China: How to Build and Control an Alternative Version of the Internet.”

The men passed the link between them, sharing it over email and instant messages. It was to a public Dropbox folder, containing hundreds of nude and intimate images of women, mostly students at the Fiji campus of the University of the South Pacific.

News of the folder’s existence was broken by the Fiji Sun, which later carried an interview with a victim in which she spoke of being harassed on both social media and offline over photos taken with an ex-boyfriend. She had considered suicide.

More coverage followed, sparking what the Sun described as a “nationwide debate on cyber laws.”

Government ministers called for swift action to protect Fijians online – and Attorney-General Aiyaz Sayed-Khaiyum delivered, introducing the Online Safety Bill to Parliament and calling for its passage to be fast-tracked.

In May 2018, after an unusually short two-month public consultation, the bill was passed into law, becoming the Online Safety Act 2018. Only government lawmakers voted in favor of the new law, with every opposition lawmaker voting against it.

While supporters of the law hailed it as a victory for women and a strike against online harassers and trolls, critics – including rights groups and youth and women’s organizations – warned it was a potential “trojan horse” for internet censorship. 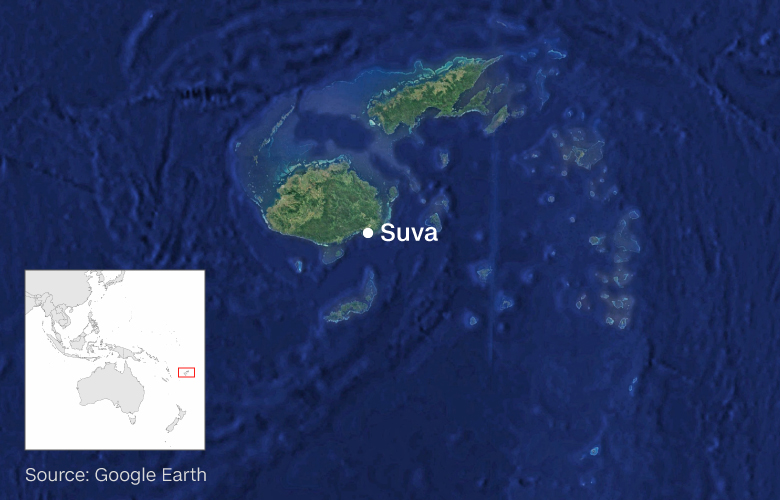 Between 1970 – when Fiji achieved independence from British colonial rule – and 2014, the Pacific island nation had four military coups, with the most recent, in 2006, lasting eight years.

The man behind that coup was Fiji’s current Prime Minister, Frank Bainimarama, who was democratically elected in 2014 in the country’s first free election in almost a decade. A former commodore in the Fijian Navy, Bainimarama has overseen moderate economic growth and moved the country towards China, and away from traditional allies Australia and New Zealand.

During the coup years, Bainimarama’s government exercised tight control of the Fijian media, embarking “on the most intense and sustained media crackdown in the country’s history, claimed to be justified on the basis of improving journalistic professionalism, curbing inflammatory reporting, and ensuring social stability,” according to academic Shailendra Singh.

However, Singh notes that while the situation worsened under military control, “freedoms historically enjoyed by the Fiji media have always been fragile, even under democratic rule.”

This tight control of traditional media – with most newspapers and television stations either government controlled or singing from the same hymn book – led many Fijians, particularly young people, to go online in search of alternative news sources, said Jope Tarai, a Fiji-based scholar at the University of the South Pacific.

“The current media landscape has really been shaped by the events of 2006,” Tarai told CNN. “There’s been an interesting evolution of censorship in our country. There were media censors in the newsrooms in 2006 – that has now transformed itself into a culture of self-censorship.”

As Fiji transitioned back to democratic rule in 2014, online publications and social media groups were very active in covering the subsequent election, and in boosting criticism of the incumbent Bainimarama government, which went on to win by a landslide.

About half of Fiji’s 905,000-strong population is online, above average for middle-income countries in the Oceania region. Of those internet users, almost all are on Facebook, according to advertising data from the social network, which is by far the biggest in Fiji.

On Facebook, groups such as Letters to the Editor Uncensored (LEU) “have emerged as a direct result of the decreasing space for public dialogue in mainstream media,” according to a report on digital activism in Fiji in the journal Asia and the Pacific Policy Studies.

On its Facebook page, LEU states that it is “a forum to post news, articles, press releases, opinions and concerns which HAVE NOT or WILL NOT be published in mainstream media due to unfair media laws and self-censorship in Fiji.”

After the 2014 elections, in which Facebook groups like LEU played a key role, “there were key (government) officials raising concerns about discussions mainly on social media,” Tarai told CNN.

The comments come after Tarai wrote in a piece for the Pacific Journalism Review last year noting: “Unfortunately, the potential to harness social media use for greater citizen participation and empowerment has often been overlooked. Instead, what prevailed was a largely one-sided, sensationalized obsession on the dangers of vitriolic and mediocre online discussions.

“By 2016, social media in Fiji had earned a full-blown negative reputation as far as the government-inclined media outlets were concerned. In early 2016, the Fiji Sun began to amplify social media as ‘the dark side’ and ended the year calling it the ‘Year of Fake News’.”

The Fiji Sun did not respond to a request for comment about the newspaper’s role in shaping public narratives around the online safety law.

Fiji is not alone in worrying about fake news. Since the term was popularized in 2016, it has been used in numerous countries to justify cracking down or tightening regulations on online speech.

In December, as Bangladesh prepared to go to the polls, the government ordered a partial internet shutdown in order to block “fake news and propaganda.” Ahead of elections in Malaysia last year, a new law was passed criminalizing publishing or sharing “fake news.” It was later repealed after the incumbent government suffered a shock defeat.

In the US and UK, privately funded groups have also proliferated claiming to be able to tackle “fake news” and spot allegedly false accounts on social media, while sometimes obfuscating their own backers and agenda. Critics have accused such groups of seeking to silence alternative media.

“Governments around the world are tightening control over citizens’ data and using claims of ‘fake news’ to suppress dissent, eroding trust in the internet as well as the foundations of democracy,” Freedom House, a US government-funded group, warned in a report last year.

In Fiji, Tarai said, “these narratives about fake news and so on are utilized not only to push a certain agenda but create more propaganda, anything that is critical can always be dismissed as fake news.”

Video Ad Feedback
Here's why it's so hard to spot deepfakes
02:39 - Source: CNNMoney

Narratives about fake news and online harassment are so effective for lawmakers seeking to push internet censorship because the problems and concerns they claim to be tackling are very real. Internet regulation has too often failed to keep up with the changing environment online.

“The concerns are very valid about the very malicious behavior online,” Tarai said.

Bernadette Carreon, the Palau-based chair of the Pacific Freedom Forum, a regional media freedom watchdog, added that remedies for tackling harassment of women and children online were “a long time coming.”

But she was skeptical about whether this was the true purpose of the new law. “Fiji is already trying to control the media, both the traditional media and online,” Carreon said. “We have to ask is (the new law) really about online safety, or is it about regulation?”

Both Carreon and Tarai, as well as numerous experts and organizations who submitted comments during the bill’s brief public consultation stage, pointed to its vagueness and lack of protections for legitimate criticism and free debate.

In its submission to Parliament, the office of the UN High Commissioner for Human Rights warned the law “fails to provide for any measures to protect truthful communications, public interest, news reports, artistic expression (or) expressions of honest opinions based on facts.”

A bus passes by a house covered with anti-coup banners near Suva, the capital of Fiji, on December 6, 2006. Critics of the new law fear it could restore censorship.
WILLIAM WEST/AFP/AFP/Getty Images

Critics’ fears that the law would be used more widely than its framers claimed were worsened when Anne Dunn, a former candidate for the ruling FijiFirst party, was appointed the inaugural Commissioner for Online Safety.

She raised considerable alarm when, in an interview with the Fiji Sun soon after being appointed this month, Dunn summarized the lessons of the new law as “if you have nothing nice to say, don’t say anything at all.”

Dunn could not be reached for comment. Representatives of the Fijian government did not respond to a request for comment.

In a statement to CNN, Fiji’s main opposition, the Social Democratic Liberal Party (SODELPA), called for the law to be overturned, saying it seemed to be “aimed at muting and chilling freedom of expression online.”

“A quick scan of social media networks and discussion platforms shows that since 1st January 2019 when the law came into force, more fake profiles and pages have popped up on social media platforms, because ordinary people fear voicing their views about the (Fijian) government under their own names because of the penalties in this law.”

Tarai agreed that there had been a chilling of speech in the wake of the new law. “Online people are discussing being careful about what they say,” he said. “A number of people have also asked relatives online not to comment on anything controversial on their Facebook pages.”