Answering the call: The women on the front lines of Japan’s defense

Editor’s Note: The series on Japan’s demographic reckoning is supported by the Pulitzer Center on Crisis Reporting.

The first time 22-year-old Teruko Hirayama stepped on board a navy ship, she was transfixed by the hardware.

“I was so amazed by all the torpedoes and missiles on the ship and its labyrinthine layout,” said Hirayama. “I’d never seen anything like that before.”

With more than 300,000 personnel, the JSDF was the world’s eighth most-powerful military in 2018, according to an armed forces strength ranking site globalfirepower.com. Formed after World War II to defend Japanese territory, its visibility has grown in recent years amid escalating tensions with North Korea and China.

The JSDF is – perhaps controversially – adding new units, ships and aircraft to meet those threats, but it also faces a challenge from within: A shrinking population.

“In the international arena, many people think that North Korea or China is the bigger threat to Japan,” said Robert Eldridge, an author and expert on US-Japan military relations. “But it’s the demographics that pose a bigger challenge.”

Japan’s population is expected to fall from 124 million to 88 million by 2065. Faced with the prospect of having fewer potential recruits, the JSDF is accepting a wider age range of candidates. Previously, recruits had to be under 27 years old, but now anyone over 18 and up to 32 years old can join.

And it’s increasingly turning to women to fill its ranks. 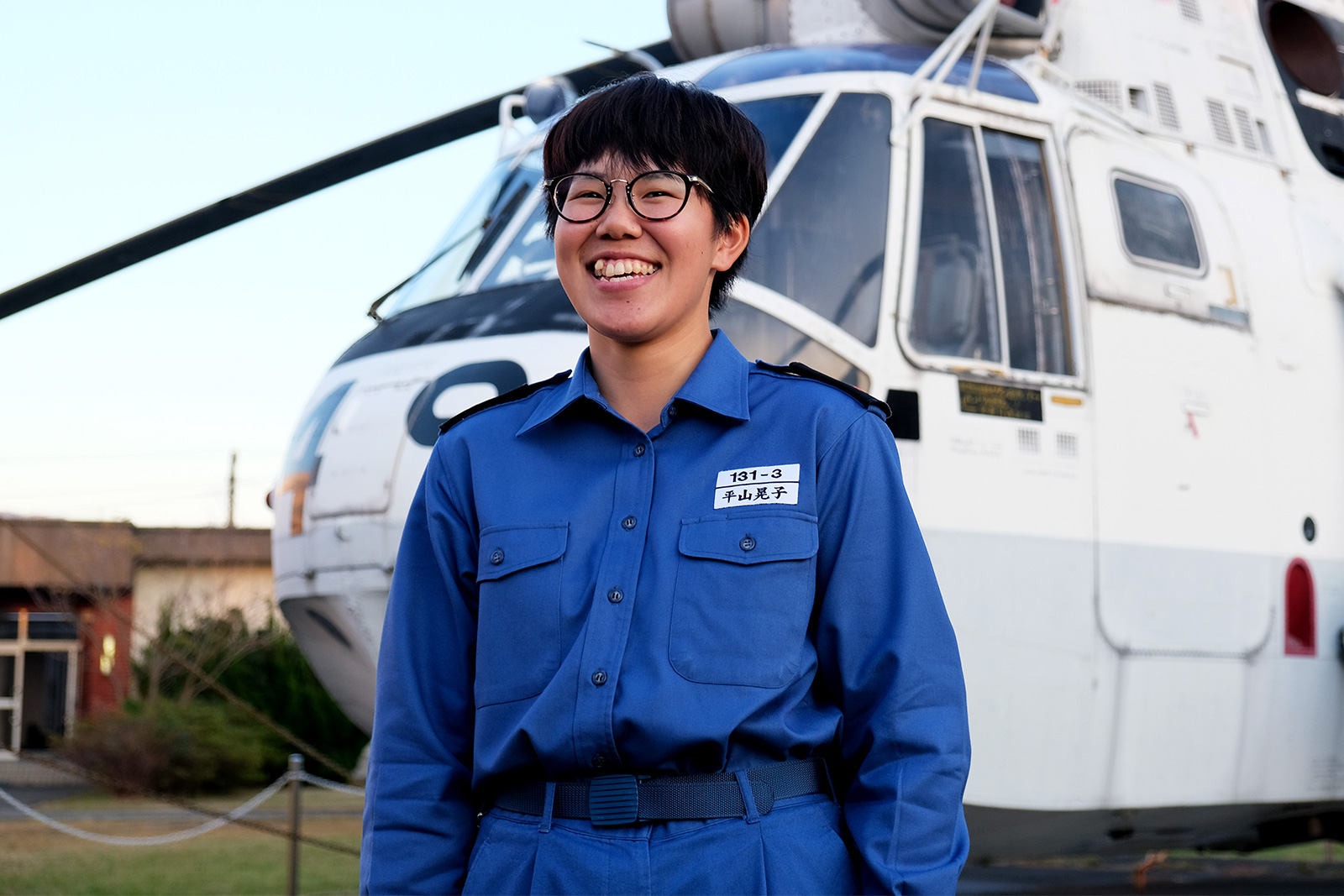 Teruko Hirayama, 23, used to be an airport security staffer. 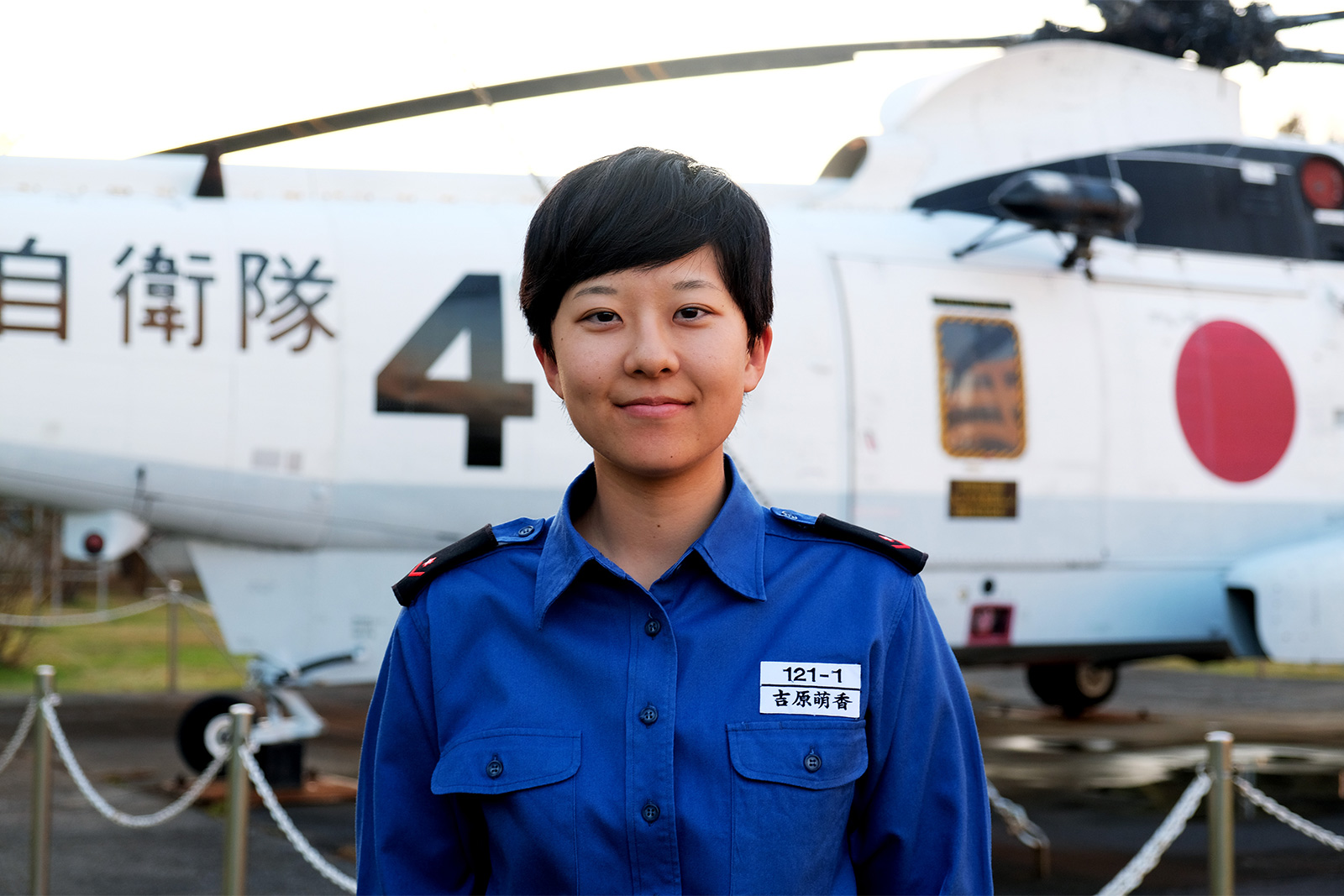 Moeka Yoshinaka, 26, worked as a nurse. 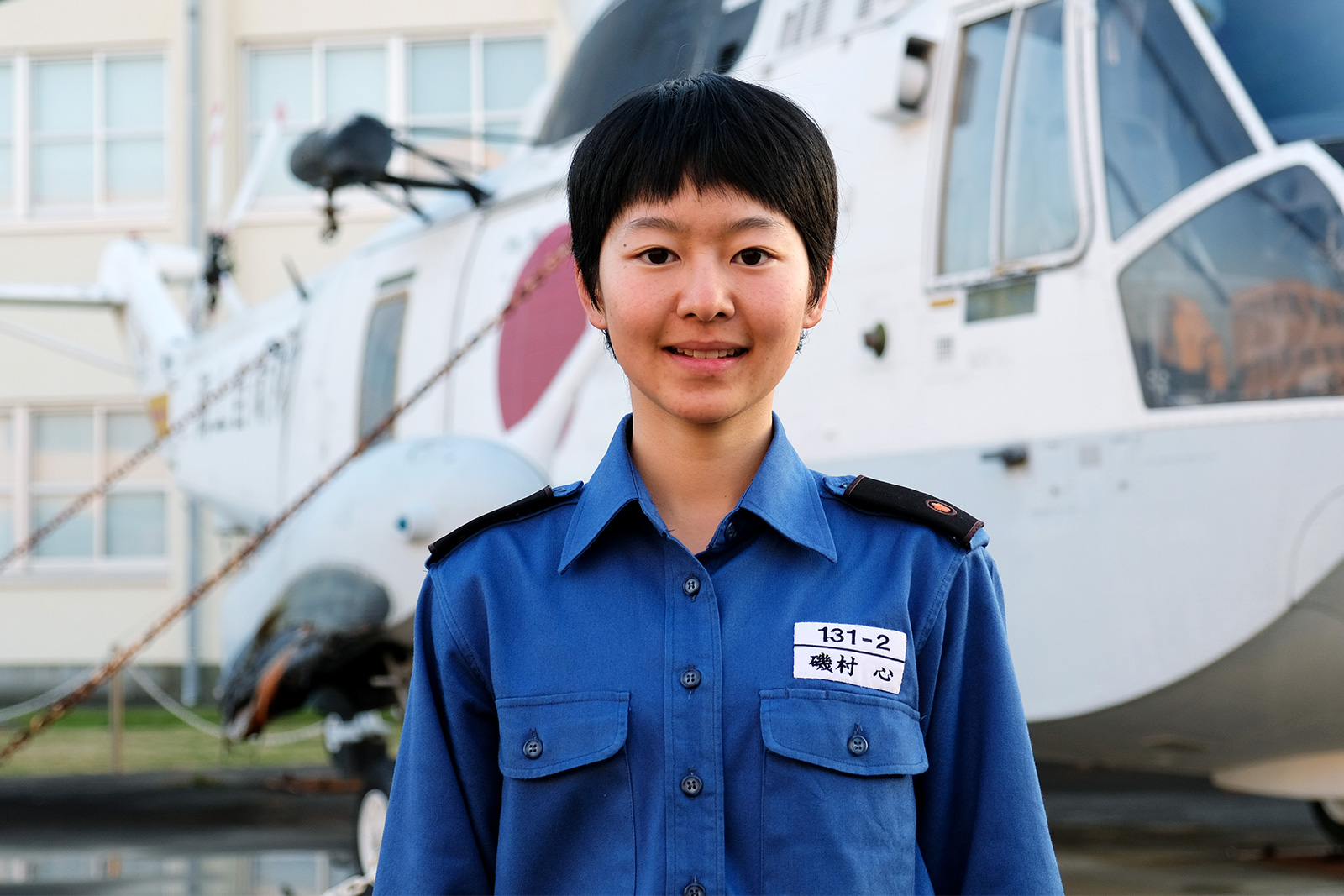 Hirayama is one of 39 new recruits based at a women’s boot camp at Yokosuka naval base on the outskirts of Tokyo. Clad in blue overalls, the women are up at the crack of dawn and their days are filled with lessons in everything from martial arts to cyber security.

After saluting their unit leaders and the Japanese flag, they haul boats weighing 1.5 tons each from the docks of Yokosuka naval base and row them out to sea.

“This can be a dangerous exercise if they don’t pay attention so they have to concentrate really hard,” Commander Hiroki Hasegawa, a pilot and navy spokesman, said from the sidelines of the dock.

“I didn’t want something like that to happen to Japan … I wanted to be in a position to defend the nation,” said the former actress, who was finding life at the navy base tougher than expected. “I’m not that good at running the 3,000 meters and doing pushups, but I’m working on it,” said Isomura, who hopes to work on a submarine.

Former nurse Moeka Yoshihara, 26, joined up out of a sense of adventure.

“I really want to go to the Antarctic aboard a ship called the Shirase (an icebreaker). I think that working here will help me fulfill that dream,” she said.

Yoshihara said that in Japan, there’s a view that the military’s job is dangerous and laborious, but she values the navy’s commitment to letting women balance their careers and family life.

Yoshihara also feels a sense of duty to the country.

“My parents and friends were worried about me joining up, but who’ll protect Japan if we don’t?”

That policy spread to the military, with the Defense Ministry launching a series of initiatives in April 2015 where money was allocated for everything from gender awareness programs to the establishment of daycare centers for children of JSDF employees. 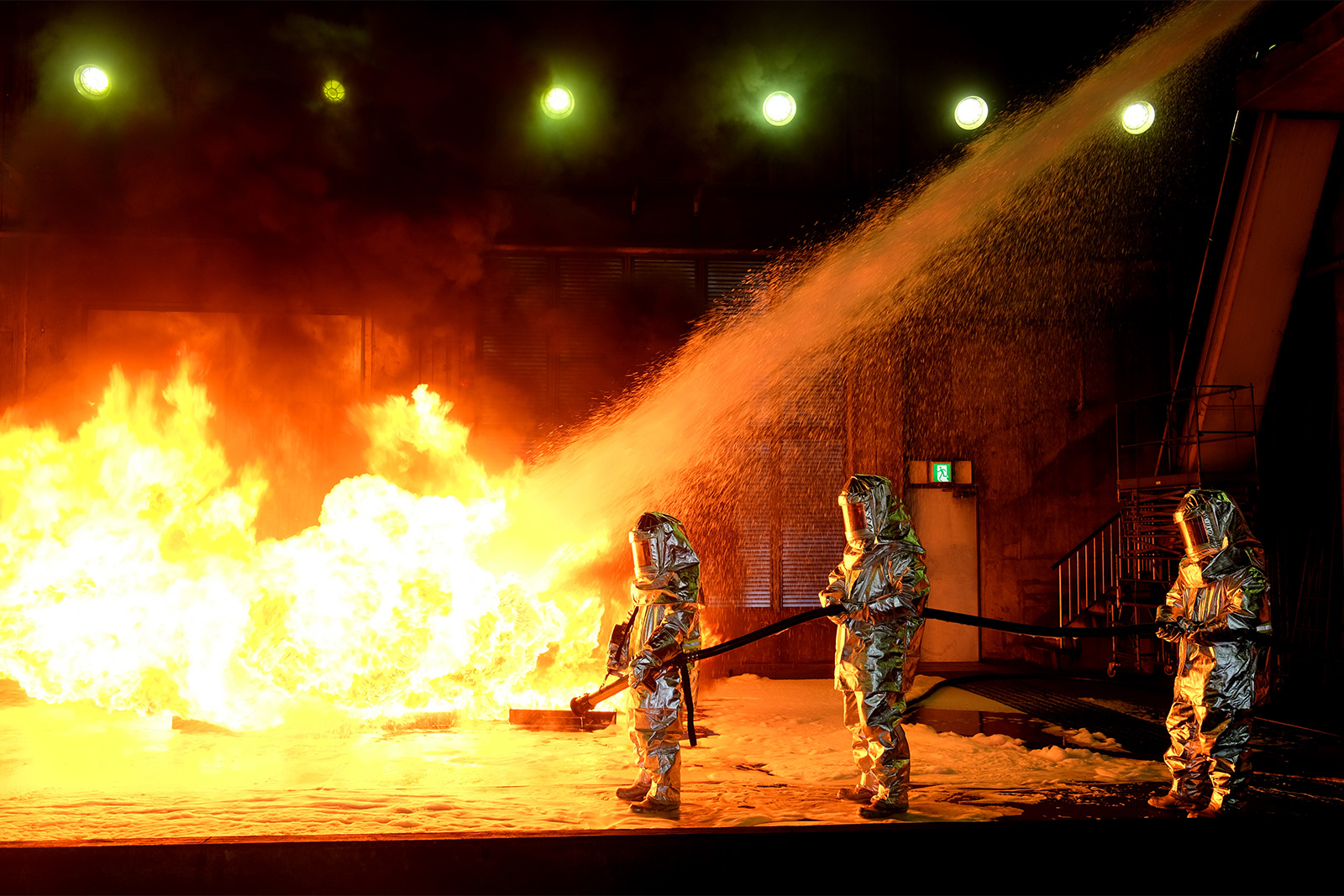 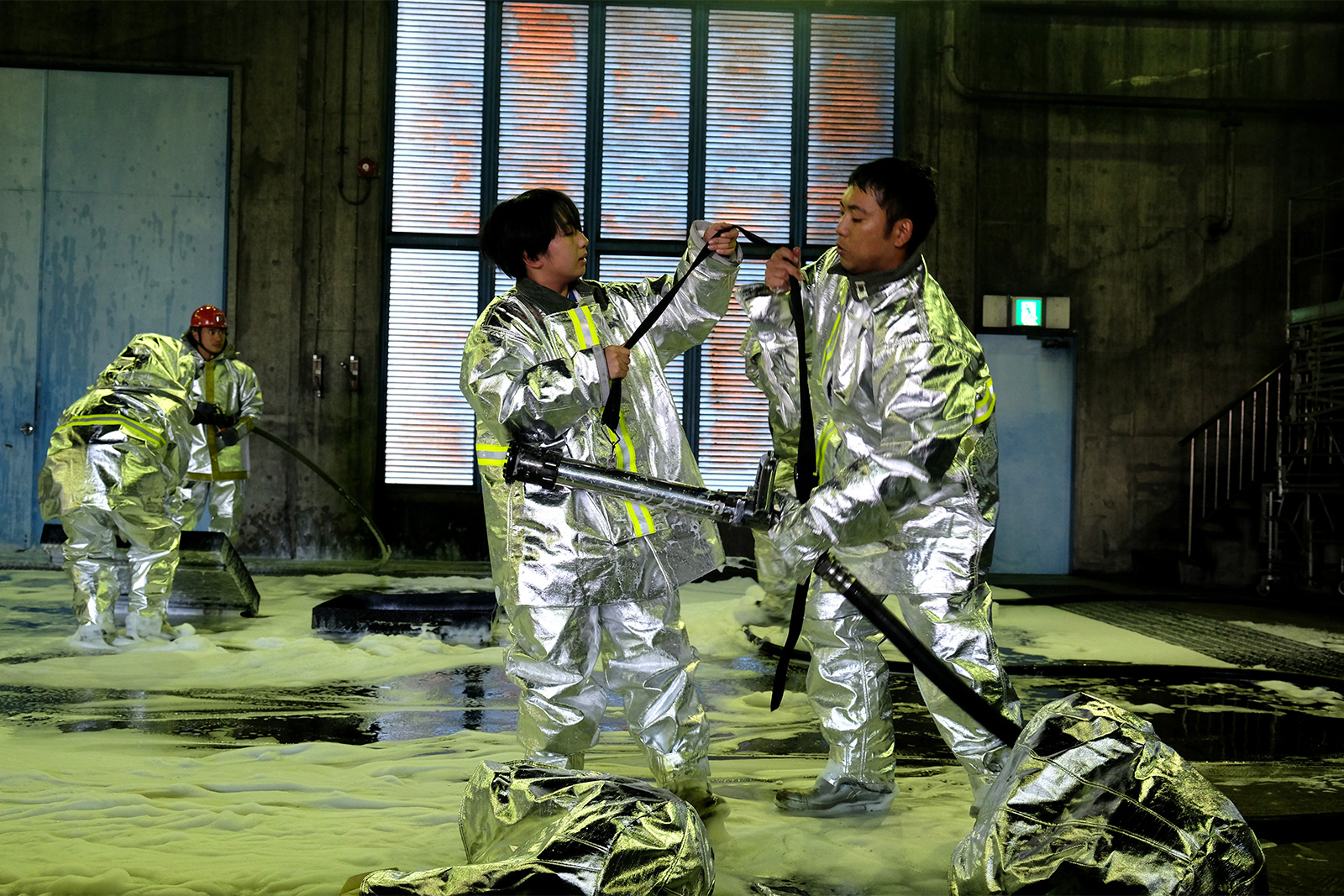 The SDF have mixed units.

When the JSDF was first formed in 1954, women were recruited exclusively as nurses. Japan’s navy accepted its first female recruits in 1977. And in the early 1990s, most roles – except those requiring combat – opened up to women.

Now the only restrictions for women remain in the Ground Self-Defense Force, in roles where they might risk exposure to dangerous and toxic substances. In 2018, the government announced an end to male-only submarine crews. However, women will only be allowed aboard when facilities such as private dressing quarters for them are installed. As of January 2019, no specific date had been set for the upgrades.

But with previously restricted positions opening up in the country’s mixed units, woman are taking on more prominent front line roles.

High female postings aren’t seen as unusual any more, according to Lt. (j.g.) Misako Yamada, who heads up the female boot camp at Yokosuka.

“When I first joined (in 2012), we’d hear about a lot of pioneering women in various SDF fields, but these days, it feels normal for us to see more women in leadership positions. It’s a given that they are there,” she said.

Despite accusations of institutional sexism in parts of Japanese society, opposition among soldiers to female front line roles has yet to materialize.

“I read about the first female pilot in the SDF’s magazine and thought it was cool,” said Pvt. Katsunari Takahashi, 22, a new recruit on the transportation unit at the Ground Self-Defense Force’s Camp Asaka in Tokyo. “We have women driving our transport trucks here. I just find it normal working alongside them.”

But while gender equality appears to be slowly improving within the military, female leaders remain few and their numbers are not representative of the six percent of the female population in the SDF, according to Eldridge, the US-Japan military expert.

Changing role of the JSDF

Women are joining the forces at pivotal point in Japan’s military history when regional tensions are rising, and the role of the JSDF is in some ways being redefined.

Analysts say the JSDF is highly competent and able to mount a strong defense. But after Japan’s defeat and aggressive role in World War II, which left some 30 million dead in the Pacific, the country asserted its pacifist stance under Article 9 of the 1947 constitution.

The country’s post-World War II constitution says the “Japanese people forever renounce war as a sovereign right of the nation and the threat or use of force as means of settling international disputes.”

The armed forces were to be purely for self-defense, as their name implies.

But in recent years Japan’s military has been expanding its vision.

Laws passed in 2015, which sparked anger in China, allowed Japanese troops to be deployed overseas for the first time since the war and come to the aid of allies such as the United States, if they are under attack.

The Japanese helicopter destroyer JS Kaga participated with a British frigate in exercises in the Indian Ocean in September.
JMSDF

The JSDF is now making itself more visible thousands of miles from home, sending ships as far away as the Indian Ocean for exercises with allies and contributing ground troops and amphibious vehicles to drills on Philippine islands.

By 2020, Abe aims for a controversial revision of the constitution which will codify the role of the JSDF and eliminate any uncertainty over the country’s ability to defend itself.

In Japan, however, the majority of people oppose this constitutional revision. An April 2018 survey conducted by Japan’s national broadcaster suggests that only 29 percent of the public thinks constitutional revision is necessary. In terms of its international activities, the SDF is seen as a body that assists people in other countries but does not fight wars.

“It’s important to keep an eye out for international developments, not just compare the SDF to the US armed forces, which have been more or less at war for decades. Most military establishments have not,” said Sabine Fruhstuck, the author of “Playing War: Children and the Paradoxes of Modern Militarism in Japan.

The new female recruits at Yokosuka all watched on TV as the SDF operated rescue missions after the 2011 Tohoku earthquake and tsunami tragedy. Such broadcasts have helped shift public attitudes towards the SDF.

‘Peace at any price’ (heiwa boke) 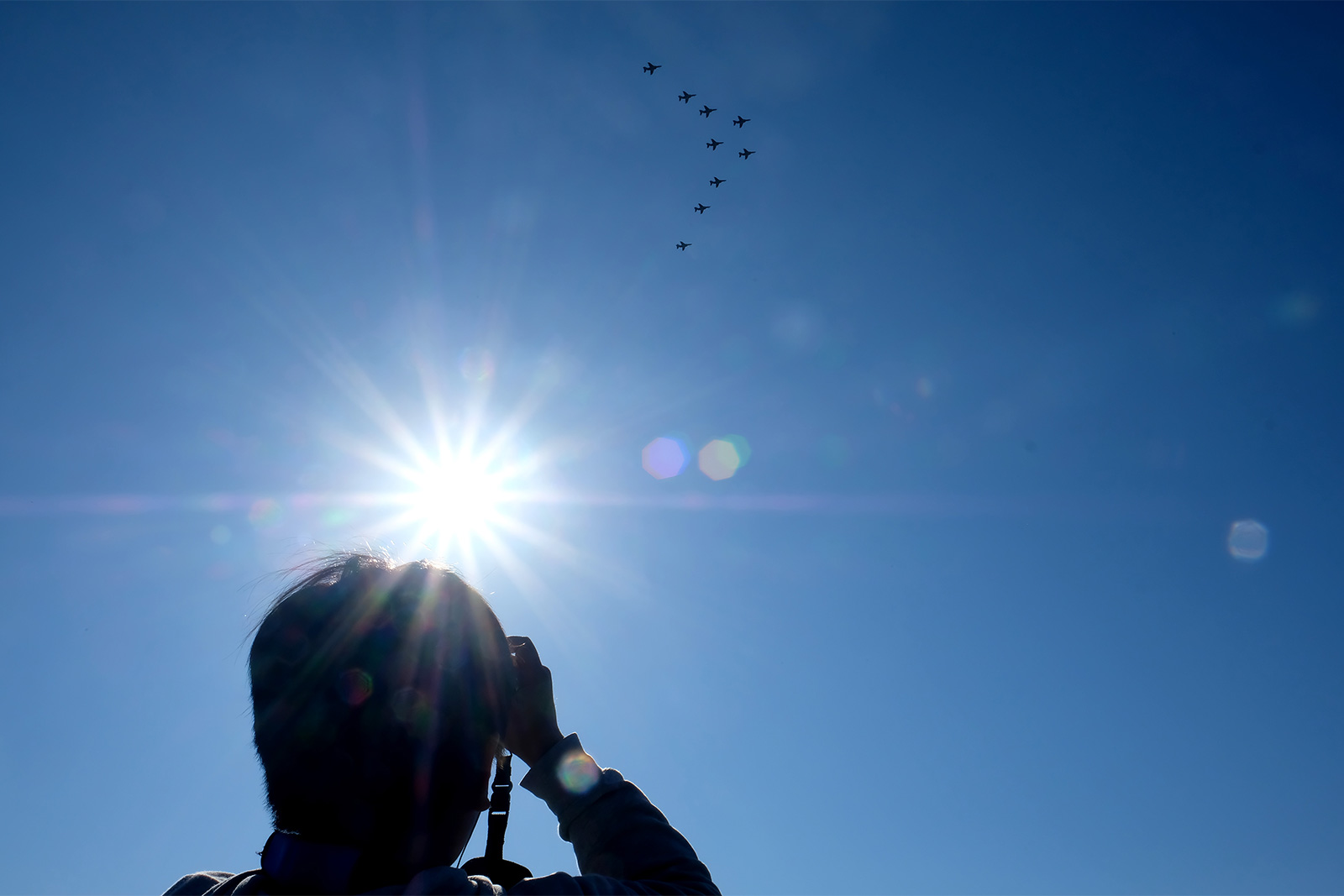 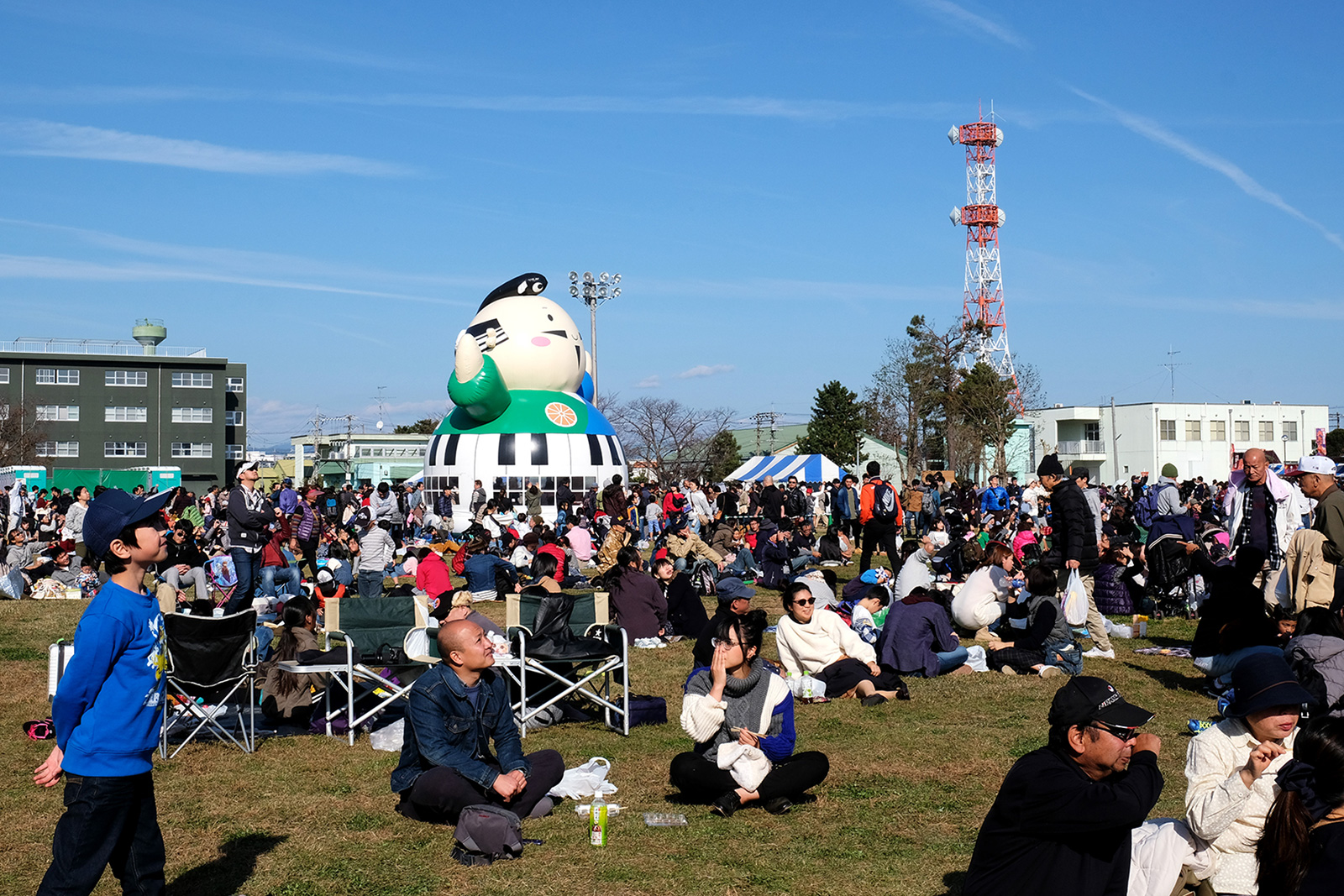 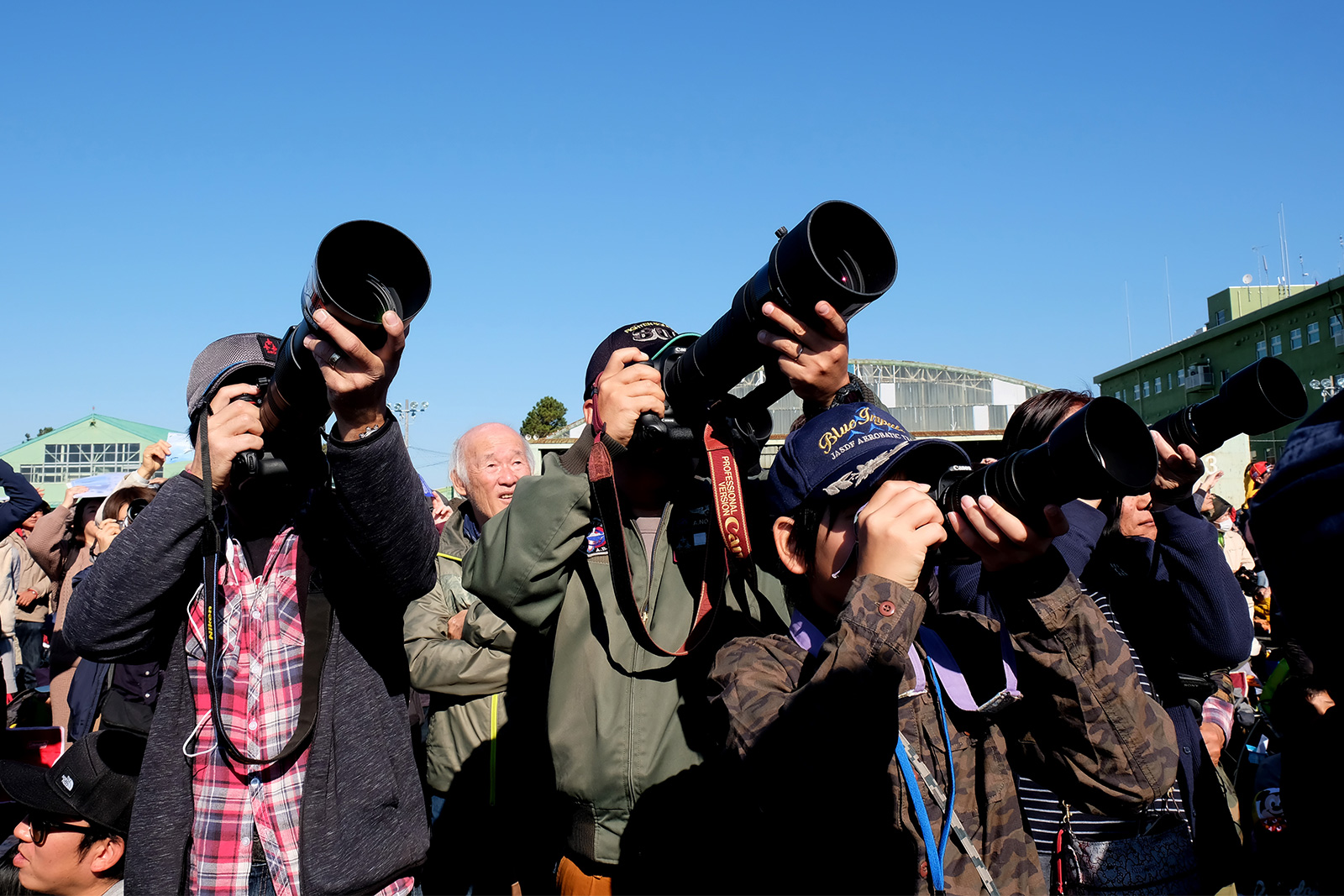 Shinji Akiyama is here to snap photos of his favorites jets with friends and family.

“I can’t imagine Japan wanting to adopt an aggressive military posture again,” said Akiyama, whose two sons are in Japan’s air force. “That would be the end of Japan as we know it if it did that.” 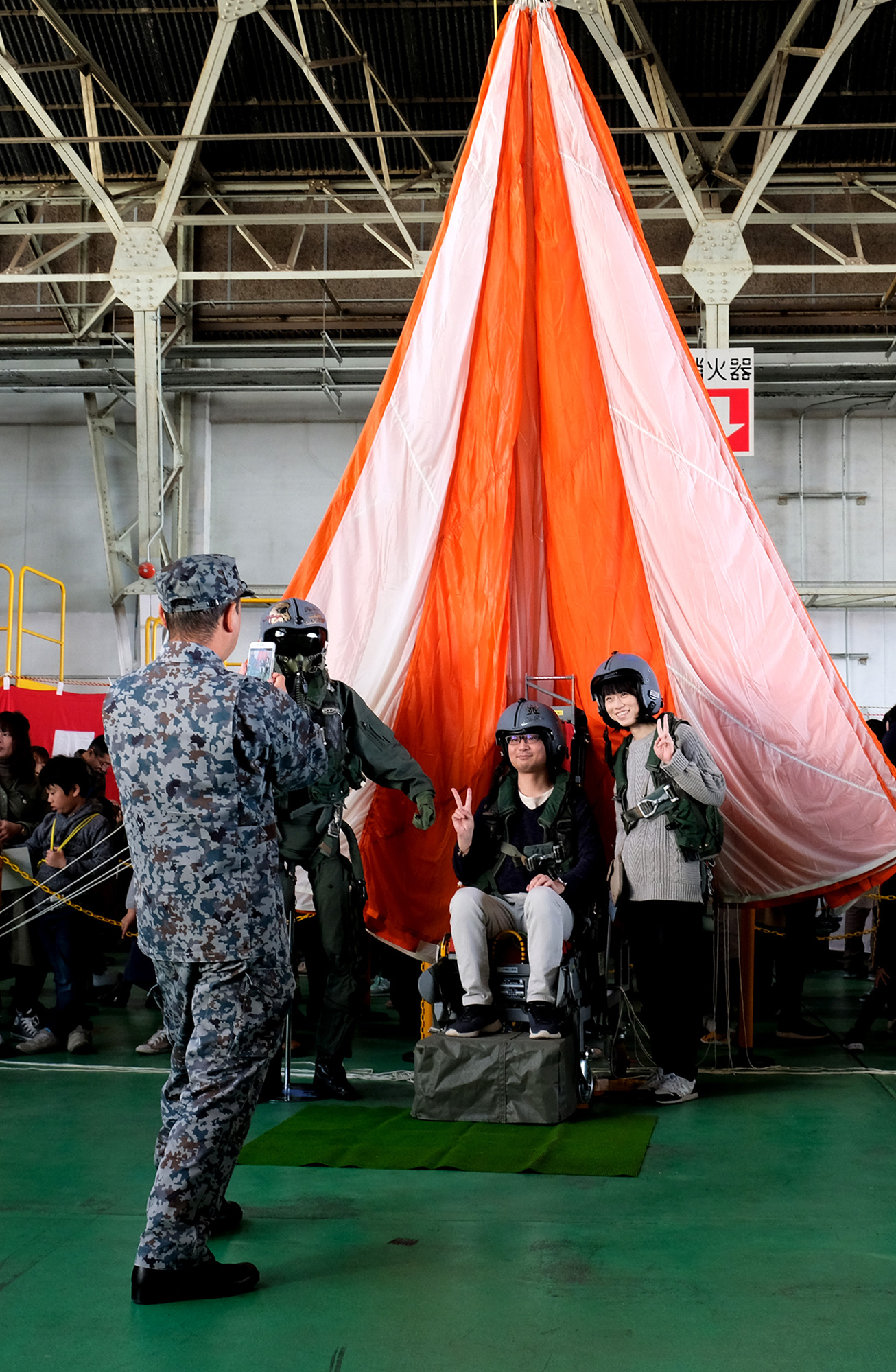 Festival visitors pose for a photo. 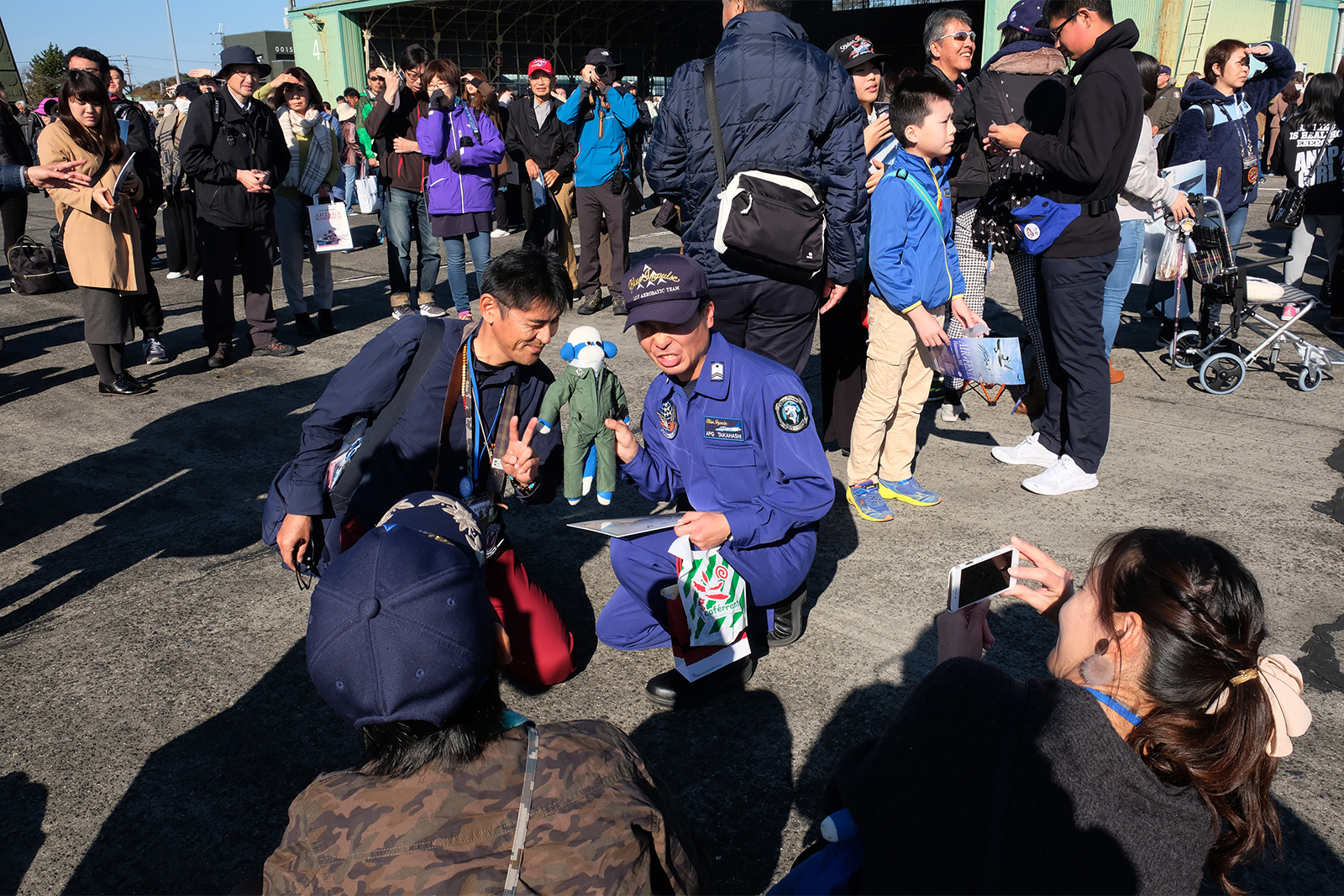 In the fried noodle line, Takeshi Kamiyama, a businessman in his 30s, said he’d come from Yamanashi prefecture, near Tokyo, for the day.

“We’re not hardcore military fans but we just came out to check out the festival’s atmosphere,” said Kamiyama, who visited with friends.

“A lot of older generations think we’ve forgotten about World War II, but nobody in Japan wants a return to that kind of past. Besides, young people are too busy trying to make ends meet these days.” 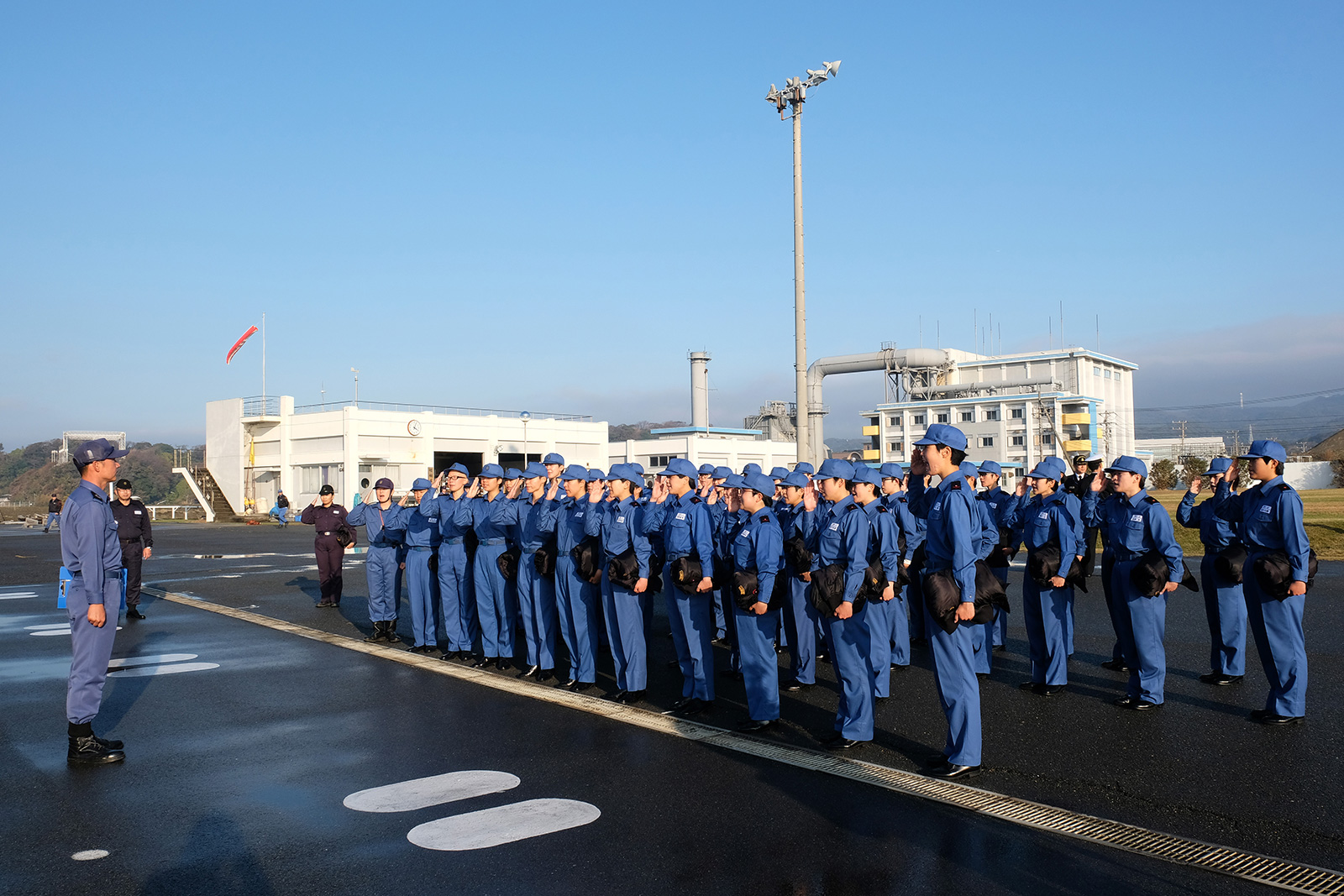 Female recruits wake up at the crack of dawn. 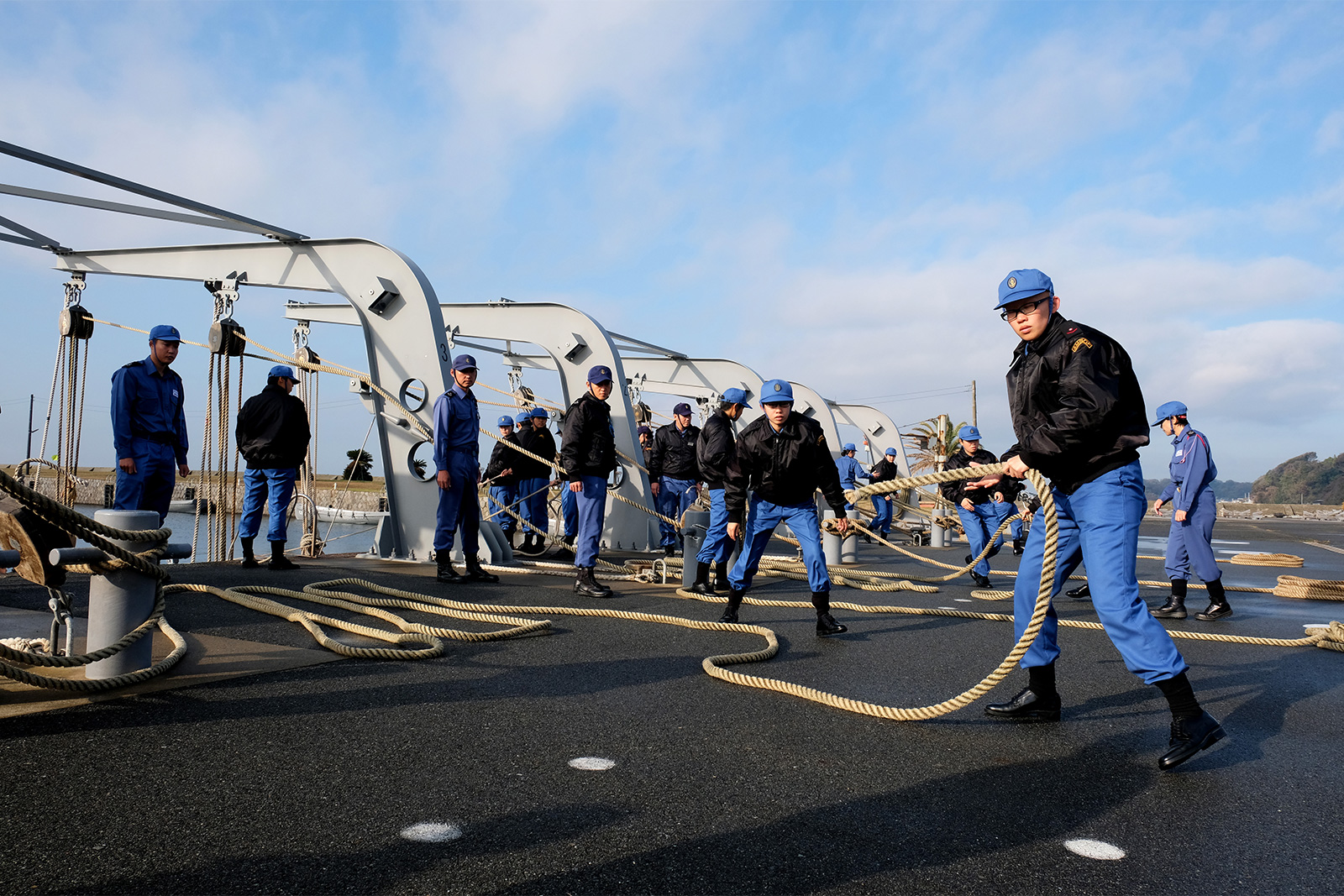 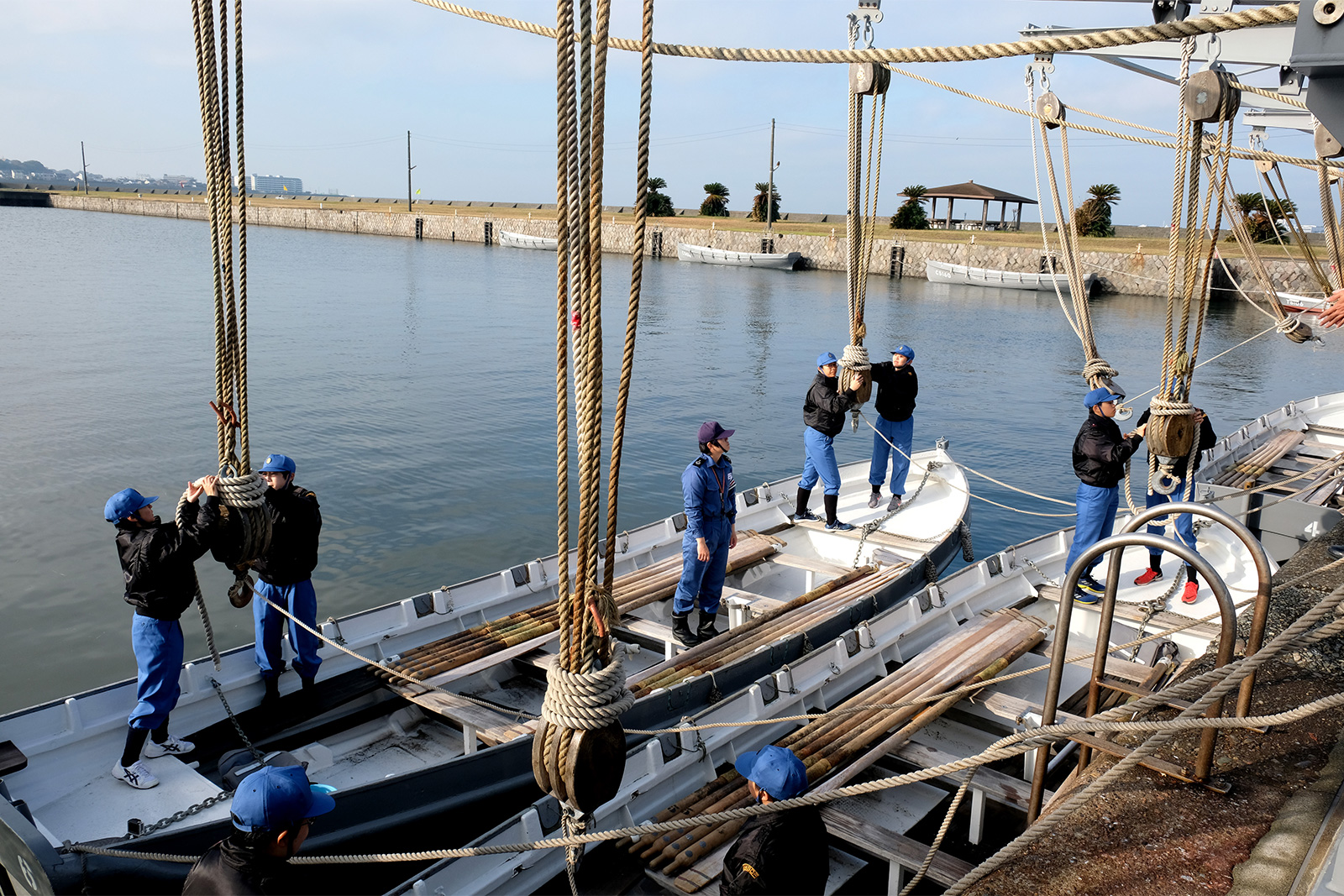 Back in Yokosuka navy base, the new female recruits are also focused on their career ambitions.

“I really want to get on a destroyer!” said Hirayama, her eyes expanding like saucers, as she speaks in front of a model replica of a ship that was retired in 2007.

She said she wants to help out during disaster relief missions, but isn’t afraid of facing anything that gets thrown her way.

“I don’t feel anxious (about the international security situation). If I was, I wouldn’t be able to defend the nation.”