Who is Venezuela’s Juan Guaido? 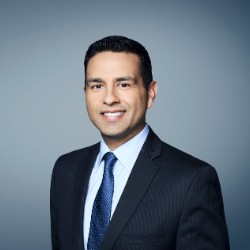 Juan Guaido on Wednesday declared himself acting president of Venezuela in a move welcomed by huge crowds of protesters and world leaders alike.

The 35-year-old has been leader of the opposition and head of the National Assembly for merely three weeks but has quickly energized the movement against President Nicolas Maduro.

Guaido, who has called Maduro a usurper, promised a transitional government and free elections to end the rule of the socialist Maduro regime.

As the eyes of the world are fixed on the Latin America country, here’s what we know about the young opposition leader:

He is an industrial engineer by trade

Guaido was raised in La Guaira, a coastal town that is home to one of the country’s most important ports and airports.

He studied industrial engineering at the Universidad Católica Andrés Bello in Caracas and went on to earn two graduate degrees in public administration, including one from George Washington University.

In his Twitter bio, Guaido wrote he is “in love with Venezuela.”

He helped launched a political party

He protested against then-President Hugo Chavez for what activists believed were attempts to control the press. Chavez accused Radio Caracas Television, also known as RCTV, of violating broadcast laws and supporting a botched coup against him. He replaced it in 2007 with a state-run broadcast station.

A few years later, Guaido was part of a group of young leaders who founded a political party in 2009 called Voluntad Popular – Popular Will – along with Leopoldo Lopez, one of the best-known faces of the opposition.

The party mission was to overcome poverty and to secure a democracy in which all Venezuelans have rights.

Lopez, who is now under house arrest, has mentored Guaido for years.

Guaido was named president of the National Assembly on January 5 but he’s not a new face among lawmakers.

He joined the National Assembly in 2011, serving as an alternate until he was elected in 2016 as representative for the state of Vargas – a position that he currently holds.

He was among several lawmakers who went on a hunger strike demanding parliamentary elections in 2015.

He was a relative unknown until he was chosen to lead Venezuela’s legislative body.

Guaido was briefly detained by Venezuelan government operatives on the way to a political rally, days after he said he was ready to replace Maduro.