The 2020 marathon has started with a sprint

(This is the seventh edition of our monthly power rankings of Democrats most likely to get their party’s presidential nomination in 2020.)

There’s been lots (and lots) of action in the 2020 Democratic primary race over the past month, but few actual changes.

Sen. Kamala Harris on Monday made official her long-anticipated announcement that she’s running for president. A handful of other candidates have either announced exploratory committees (Elizabeth Warren, Kirsten Gillibrand) or have outright announced that they are running (Julian Castro).

But aside from Harris and Warren (potentially), the candidates who comprise the top tier – at least at this early stage of the race – are still on the sidelines. Former Vice President Joe Biden seems to be moving toward a candidacy, but has given no indication of when he might make a decision. Former Texas Rep. Beto O’Rourke is in soul-searching mode at the moment.

Those decisions – we’d be surprised if either Biden or O’Rourke didn’t run – have the potential to shake up the race in a meaningful way. At the moment, however, the movement in the 2020 field is all in the second tier.

Speaking of which, here’s our latest look at the 10 men and women most likely to win the Democratic presidential nomination in 2020, ranked.

10. Julian Castro: To the credit of the former San Antonio mayor, he didn’t fiddle around much – he just got in, announcing his candidacy last weekend. “I am not a frontrunner in this race, but I have not been a frontrunner at any time in my life,” he said in making his candidacy official. The question now for Castro is how he stands out in the race – especially if fellow Texan O’Rourke gets in. (Previous ranking: 9)

9. Amy Klobuchar: The pitch from the senior senator from Minnesota to voters will come down to electability and pragmatism. Klobuchar’s wide 2018 reelection margin in a state Trump nearly won may sell with voters who desperately want to beat Trump. That, combined with a prosecutorial streak and a fairly moderate record (which may be rare among 2020 contenders), could give her a unique lane to the nomination. (Previous ranking: 7)

8. Kirsten Gillibrand: The New York Senator got into the race earlier this week – casting herself as a leading voice for women in national politics. In the announcement of her exploratory committee, Gillibrand put her young family front and center – and noted that she was running to fight for them. Speaking of fighting, her pledge that she is not afraid of Trump could win her some support among Democrats looking for a scrapper. The problem? She has a long voting record in the House that is considerably more conservative than her Senate votes. (She’s already trying to clean up that record; she told MSNBC’s Rachel Maddow Wednesday night that her past positions on guns and immigration were wrong.) (Previous ranking: 10) 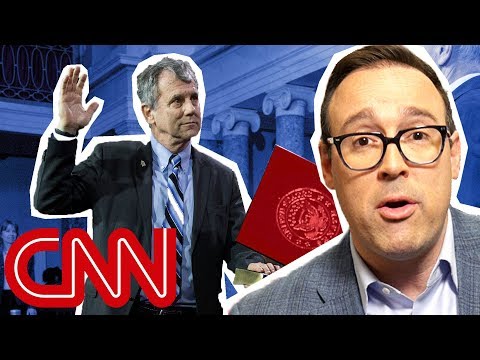 7. Bernie Sanders: The 2016 runner-up continues to place a (distant) second in 2020 primary polls behind Biden. That, along with the growing liberalness of the Democratic base, is enough for him to still be a contender. Make no mistake though: his stock has fallen. Despite universal name recognition, he cannot break out of the teens in primary polling. There will also be candidates like O’Rourke who can eat into Sanders’ base of young voters. And the last few months have been especially harsh for the Vermont senator. For example, he had to apologize to women who were “harassed or mistreated” during his 2016 campaign by male campaign workers. (Previous ranking: 6)

6. Sherrod Brown: If you’re looking for a credible dark horse, the Ohio senator is it. Now Brown isn’t in the race yet, but his announcement this week that he is embarking on an early state listening tour suggests he is likely to be a candidate. Brown has a proven record of winning votes in a swing state in the Midwest, a long record of liberal advocacy and an authentic populist streak. But can he raise the money to compete with the big girls and boys? (Previous ranking: 8)

5. Cory Booker: Iowa and New Hampshire will play a big role in the 2020 nomination process. That’s good news for the junior senator from New Jersey, who’s been working his butt off to build relationships in the two early states. Booker, like others in the field, can point to a progressive Senate record. He’s also one of only two black candidates in the field. (Black voters make up around 20% of the Democratic primary electorate.) Booker has two obvious potential flaws. First, many Sanders supporters regard him as a “neoliberal” for his ties to Wall Street. Second, Booker can be very energetic, but sometimes that may come across as insincere. You may recall his “Spartacus moment.” (Previous ranking: 4)

4. Elizabeth Warren: After a very rocky run-up to her announcement, the Massachusetts senator had a nice rollout of her exploratory committee – which she announced somewhat surprisingly on December 31. While Warren flubbed her attempt to put questions of her Native American heritage behind her, she remains a potent figure in the party. She’s a liberal’s liberal with anti-corporatist cred and an ability to raise tens of millions of dollars. (Previous ranking: 5)

3. Joe Biden: The case for the former vice president is what it’s always been: he holds a clear lead in primary polls; his favorable ratings with Democrats are through the roof; he holds a substantial lead in early polls against Trump (which bolsters an electability argument); and he was second in command to the very popular President Barack Obama. Additionally, it now seems like Biden wants to run, which obviously increases his chance of winning. But Biden’s problems are clear too. He’s an old white moderate man in a young diversifying party keen on electing progressives and women. (Previous ranking: 3)

2. Beto O’Rourke: The former Texas congressman is the buzziest potential candidate in the field – by a lot. He’s being touted by many as the closest thing to Obama since, well, Obama. And while O’Rourke hasn’t made his intentions clear, his solo road trip seems like the sort of thing someone who wants to run for president would do. While O’Rourke still has some time to fix this problem, his fuzziness on issues could come back to bite him if he doesn’t get up to speed – and quickly. (Previous ranking: 2)

1. Kamala Harris: When you’re trying to think of who will win the nomination, you have a look at a checklist of attributes that play well within today’s Democratic Party. The junior senator from California pretty much checks all of them. Progressive? Check. Woman? Check. Black? Check. Can take it to Trump? She’s the former attorney general of California. Still, Harris is well back in the early polls, which keeps us from going all in on her. (Previous ranking: 1)