Rudy Giuliani said Wednesday that he never denied President Donald Trump’s campaign colluded with the Russian government during the 2016 campaign, only that the President himself was not involved in collusion.

In an interview with CNN’s Chris Cuomo on “Cuomo Prime Time,” Giuliani, a former New York mayor and Trump’s attorney, said he doesn’t know if other people in the campaign, including former campaign chairman Paul Manafort, were working with the Kremlin during the 2016 presidential race.

It’s another remarkable statement from Giuliani, given that the President and his supporters have repeatedly denied any collusion between the Trump campaign and the Russian government. A person familiar with the matter told CNN last week that Manafort, while serving as Trump’s campaign chairman, tried to send internal polling data from the Trump campaign with two Kremlin-supporting Ukrainian oligarchs through his associate Konstantin Kilimnik, a Russian national who is linked to Russian intelligence.

Trump's Putin problem seizes the spotlight in a time of turmoil

When Cuomo asked if Manafort sharing such data with foreign agents constituted collusion, Giuliani said Trump never shared the polling data himself and only found out about it recently in the news.

“Donald Trump wasn’t giving polling data to anyone,” Giuliani said, adding, “he did not know about it until it was revealed a few weeks ago in an article.”

Giuliani attempted Thursday morning to clean up his remarks, telling CNN’s Dana Bash that he did not intend to send any new signals regarding the Trump legal team’s understanding of the investigation.

“The President did not himself, nor does he have any knowledge of collusion with Russians. If anyone was doing that, he is unaware of it and so am I,” Giuliani said. “But neither he nor I can possibly know what everyone on the campaign was doing.”

Giuliani said collusion is not a crime and the term is now being used broadly to describe contact with Russians.

“I can’t possibly say no one had contact about something or in some way,” he said.

Trump himself has tweeted at least 13 times directly saying there was no collusion between the Trump campaign and the Russian government. The latest such denial came on December 10.

“Democrats can’t find a Smocking (sic) Gun tying the Trump campaign to Russia after James Comey’s testimony. No Smocking (sic) Gun…No Collusion.’ @FoxNews. That’s because there was NO COLLUSION. So now the Dems go to a simple private transaction, wrongly call it a campaign contribution,” Trump tweeted, referencing a quote that was said on Fox News.

The President reacting to a filing in the court case of his former attorney, Michael Cohen, and the money paid to two women during the 2016 campaign who allege they’ve had extramarital affairs with Trump. Trump has denied both allegations.

Trump later added, “Which it was not (but even if it was, it is only a CIVIL CASE, like Obama’s - but it was done correctly by a lawyer and there would not even be a fine. Lawyer’s liability if he made a mistake, not me). Cohen just trying to get his sentence reduced. WITCH HUNT!”

In the interview with Cuomo, Giuliani challenged special counsel Robert Mueller to provide evidence of wrongdoing by the President.

“Let’s see if he’s got anything – I challenge him to show us some evidence that the President was involved in anything approaching criminal conduct,” Giuliani said.

Later in the interview, Giuliani shot down reports that he had said Trump’s legal team should get to edit Mueller’s report before it goes public.

Giuliani told Cuomo that he only meant Trump’s legal team should get to see Mueller’s final report before it goes public in order to write a response, but stressed that he does not want to alter the report and supports as much of it being published as national security allows.

“Of course I should (be able to view it first), I should be allowed to respond,” Giuliani said, adding that “it’s fair that we get an opportunity to do that.”

“I don’t want to change the report, I want to respond to the report,” he added.

Giuliani said that he would ideally like the report to be published unredacted so that he and fellow Trump lawyer Jay Sekulow could provide a complete counterargument, and that he would not be able to edit the report regardless.

“As his lawyer, I’d honestly like you to see the whole report because I think Jay and I could knock the hell out of it,” he said.

“First of all, they wouldn’t let me change the report. Secondly; I’ve been a lawyer too long to think I’d ever do that. Third, I want them to write the garbage they’re going to write because I want to answer it,” Giuliani added.

Giuliani: I never said there was no collusion in the campaign 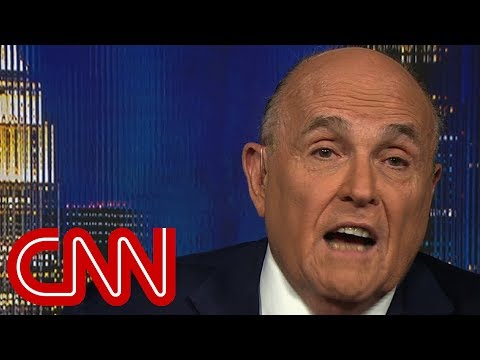