Lady Gaga once defended her 2013 collaboration with singer R. Kelly by pointing to the “bond” they shared over “very untrue things written about us.”

But in the wake of a recent Lifetime documentary series that chronicles allegations of abuse, predatory behavior and pedophilia against Kelly, Gaga is now facing pressure to condemn him. Kelly has strongly denied the allegations.

Gaga’s single “Do What U Want” featured vocals by Kelly, a move that was controversial when it released nearly six years ago because the R&B singer had stood trial in Chicago on child pornography charges in 2008.

During a press conference in Japan in 2013, Gaga explained their partnership on the song.

“R. Kelly and I have sometimes very untrue things written about us, so in a way this was a bond between us,” she said. “That we were able to say, the public, they can have our bodies, but they cannot have our mind or our heart. It was a really natural collaboration.” 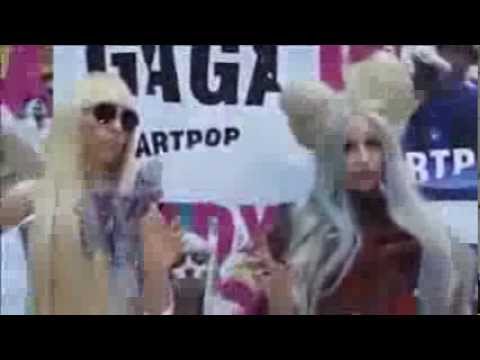 The pair also performed a sexually provocative duet on “Saturday Night Live” at the time.

Earlier this week, “The Karen Hunter Show” on SiriusXM aired an interview with “Surviving R. Kelly” documentary series producer, Dream Hampton, who named Gaga as a person she wished she could have spoken to for her project.

“I wanted to know how Lady Gaga could be on ‘SNL’ with him as someone who advocates for domestic abuse survivors and was, you know, had this ridiculous performance with him on ‘SNL,’” Hampton said.

R. Kelly and Lady Gaga performing together at the American Music Awards in 2013
John Shearer/Invision/AP

There had already been an outcry for Gaga, who has been a proponent of the #MeToo and Time’s Up movements, to speak out against Kelly and those calls increased after Hampton’s remarks.

.@ladygaga, please be ready to answer questions about #SurvivingRKelly at the #GoldenGlobes today. Your silence on this has spoken volumes. https://t.co/7J8Xf4sxAH

I would like to know what @ladygaga, who has been a firm advocate of abuse survivors, has to say about the R Kelly fiasco and why she collaborated with him after years of abuse allegations were made against him. Its not a surprise to us. It shouldn't be to her either.

“@ladygaga, please be ready to answer questions about #SurvivingRKelly at the #GoldenGlobes today,” writer Ernest Jones tweeted Sunday. “Your silence on this has spoken volumes.”

CNN has reached out to reps for Gaga for comment.

“Surviving R. Kelly” aired over three nights on Lifetime and has renewed interest in allegations against Kelly.

Time’s Up has supported the #MuteRKelly social media movement and on Wednesday shared a statement regarding the singer with CNN.

“In July of 2017, the resurgence of sexual abuse allegations against R. Kelly prompted Atlanta Arts Administrator, Oronike Odeleye to start a petition to get R. Kelly’s music off Atlanta airwaves,” the statement read. “In the spring of 2018, we joined the fight to #MuteRKelly. We cannot condone profiting off the trauma of Black girls and women. TIME’S UP calls on any organization still in business with R. Kelly to cut ties immediately. All allies in the fight against sexual violence must take a stand on this issue, and stand together in defense of women of color.”

On Tuesday, a Chicago prosecutor said her office has been in touch with two families related to allegations against Kelly since the series aired.

“Please come forward. There is nothing that can be done to investigate these allegations without the cooperation of victims and witnesses,” Foxx said during a news conference. “We cannot seek justice without you.”

But Kelly’s lawyer said the state’s attorney’s call for people to come forward was “ridiculous.”

“There’s nothing there,” attorney Steve Greenberg said. “When you fish for this kind of stuff the riff raff come out and you end up with wrongful accusations.”

Gerald Griggs, an attorney for the family of Joycelyn Savage, one of the women featured in “Surviving R. Kelly,” said Tuesday the Fulton County District Attorney reached out to Griggs after the show aired and is conducting an investigation into Kelly.

Savage’s family has claimed she is having a sexual relationship with Kelly, and that she is being manipulated by him into cutting off contact with the outside world.

Her father says they haven’t heard from her in about two years.

Savage responded to this claim in a video released in 2017, in which she denied she’s being held and that she had been brainwashed by the Grammy-award winning singer.

“I just want everybody to know – my parents and everybody in the world – that I’m totally fine. I’m happy where I’m at and everything is OK with me,” she said in the video.

Chris Hopper, the public information officer for the Fulton County DA, said he had “no comment” after being asked if there was an open investigation of Kelly in Georgia.

Gaga has been outspoken in the past in her support of sexual assault victims and went public as a rape survivor in 2014.

The superstar performed “Til It Happens to You,” the Oscar-nominated song she co-wrote with Diane Warren for “The Hunting Ground,” a CNN documentary about rape and assault on college campuses, at the 2016 Academy Awards.

Gaga told Howard Stern in 2014 that she was 19 when an older man took advantage of her and that she never confronted him.

“I thought it was my fault for ten years,” she wrote in an Instagram post in 2016. “The morning after the Oscars when I talked to my grandmother Ronnie, with tears in her eyes I could hear them welling through the phone she said to me ‘My darling granddaughter, I’ve never been more proud of you than I am today.’ “