Axelrod: Why Warren will be such a major player in 2020 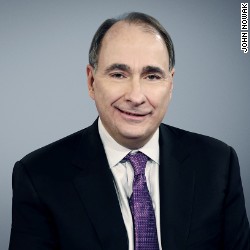 Editor’s Note: David Axelrod, CNN senior political commentator, is host of the podcast “The Axe Files,” now a regularly featured show on CNN. He was senior adviser to President Barack Obama and chief strategist for the 2008 and 2012 Obama presidential campaigns. The opinions expressed in this commentary are his. View more opinion articles on CNN.com.

For those who had somehow escaped this jarring reality, the Massachusetts senator Elizabeth Warren offered a little reminder on New Year’s Eve that Campaign 2020 is upon us. Strike up the band!

And cue the pundits, who wasted little time assessing her chances and the meaning of her early announcement. (Yes, it was for an exploratory committee, but come on, folks! Watch the video. She’s in!)

Is Warren the new and improved Bernie Sanders, a woman AND a populist, who could combine these robust bases to ride to the nomination?

Or is she too strident? Too stilted? Too old? Too reactive, as reflected by the ill-conceived video she released shortly before the midterm elections to try to quell doubts about her claim to Native American ancestry? All she seemed to accomplish was to give President Donald Trump another opportunity to gleefully trot out his tiresome Pocahontas routine yet again.

Anyone who makes confident predictions today about the next presidential election clearly didn’t learn from the last. Humility is in order, particularly in handicapping a field already as long as the holiday lines at Disney World.

With that disclaimer, let me dive headlong into the pundit pool and say that Warren will be a major player among the cavalcade of Democrats now queuing up.

We live in times of revolutionary change. Technology and globalization have created enormous opportunity for some, and disruption and stagnation for many. Decades of policies in Washington, pushed by an army of special interest lobbyists, have accelerated these trends. This is a case Warren has been making since long before she left Harvard and entered public life.

Her pioneering book, “The Two Income Trap,” about the mounting economic pressure on working families, was required reading among Democrats and progressive politicians in the mid-2000s.

If biography is prologue, the cause of the embattled middle class is a natural one for Warren. Her hardscrabble upbringing in rural Oklahoma and struggle as a young single mother to raise her children and pursue an education are powerful validators.

I served in the White House when Warren, then a special House counsel, was pummeling treasury officials over treatment of Wall Street executives who were culpable in the financial crisis. I saw her inaugurate the Consumer Financial Protection Bureau, the government watchdog that saved billions for consumers before the Trump administration relegated it to the sidelines.

PHOTO: Brian Snyder/Reuters
U.S. Senator Elizabeth Warren (D-MA) speaks to reporters, after announcing she has formed an exploratory committee to run for president in 2020, outside her home in Cambridge, Massachusetts, U.S., December 31, 2018. REUTERS/Brian Snyder

She has offered a series of serious ideas about government and Wall Street reform, and is one of the most incisive members of the Senate.

Warren also has laid the groundwork for her candidacy more assiduously than most, running an extensive, sophisticated operation in 2018 to help Democratic candidates around the country, even as she ran for re-election to the Senate. She raised tens of millions for these dual operations and still has $12 million in the bank.

As Sanders proved on 2016, there is an audience for the hard-edged populism Warren loudly proclaimed in her announcement video. Many Americans are fed up with the hegemony of Wall Street and the stranglehold of lobbyists, a trend made worse by Trump, despite his iconic campaign pledge to “drain the swamp.”

The 2018 elections demonstrated the powerful appeal of women on the ballot, both in Democratic primaries and general elections. And the nation’s first primary will take place in New Hampshire, which shares the Boston media market with Massachusetts.

All this makes Warren a contender. It doesn’t mean she’ll win. If Sanders or other populists – Sens. Sherrod Brown of Ohio and Jeff Merkley of Oregon – enter the race, her climb becomes steeper. There will be other women, all younger than Warren, who is nearing 70. There will be candidates of color, better positioned to compete in the crucial state of South Carolina and beyond.

Democrats may, ultimately, choose a candidate with a more uplifting and unifying message in response to a relentlessly divisive President, or a candidate with a less edgy and dogmatic vision of capitalism than Warren’s. Some fear Warren could drive away the suburban voters who delivered Democrats the House in 2018.

And, despite an extraordinary personal story and genuine, long-standing commitment to her principles, Warren’s presentation sometimes can seem wooden and inauthentic.

Still, Warren is powerfully intelligent, and indefatigable in pursuit of her goals – the very traits that helped lift the janitor’s daughter from modest beginnings to this moment. These are indispensable qualities any winning candidate for president of the United States must own.

This commentary was updated from an earlier version.