Over the past 12 months, I’ve combed through lots and lots of President Donald Trump’s speeches, public statements and media interviews. I mean, a lot.

I’ve done it because I think it’s important for the public to know what the President is saying – and very few people have the time to go through each of his public remarks to see what’s in there. I do have that time (insert “get a life” comments here), and so I have dedicated myself to documenting, contextualizing and yes, occasionally poking fun at the comments made by Trump about, well, everything over the past year.

With the help of the one and only Brenna Williams, I present to you below the best of the best lines uttered by the 45th President of the United States over the past year. As always, these are real sentences from Donald Trump’s mouth. For real.

1. “The country is doing well in so many ways. But there’s such divisiveness.”

What’s amazing here is that Trump seems entirely unaware of the role he has played in the country’s divisiveness. That’s not to say we weren’t divided before 2016 – we were – but it is to say that Trump exacerbated those divisions for political gain, and continues to do so.

I’ve always been more of a cold guy.

3. “You are somewhat more traditional politicians (than me).”

Leader in the clubhouse for understatement of the year.

4. “I think my positions are going to be what the people in this room come up with.”

This was back in those days, which seems SO long ago now, where people thought Trump might actually be willing to make some sort of deal on a comprehensive immigration reform package. Within days – maybe even hours – of Trump suggesting he would be open to any sort of compromise that emerged from Congress, he was walking it back.

5. “Remember two things. Number one, I said, we’re going to be saying Christmas again. And, number two, I said I was going to give you a Christmas present.”

Does it matter what Trump was talking about? It does not.

7. “He was a great cheerleader for the country. But not great on the trade.”

Trump on Ronald Reagan. I am sure the Republican establishment enjoyed that assessment.

Wait, what? Trump’s wildest lines of 2018 | With Chris Cillizza 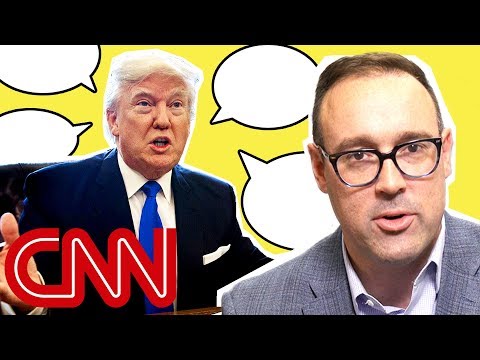 An actual quote by the President of the United States. (TWICE!)

10. “You go to the hospital. You have a broken arm. You come out, you are a drug addict with this crap.”

This feels like an oversimplification of the opioid epidemic. Also of hospitals. And broken arms.

The most Trumpian quote ever. Most people when asked to grade their performance say “B” or something like that. Room for improvement and false modesty and all that. Not Trump. A+!!!!!!

12, “And nobody knows what a community college is.”

13 “We’re all fighting battles, but I love fighting these battles.”

This is the truest thing Trump said in this entire speech. He loves to fight – rhetorically, at least. Loves it.

14. “He would stand up there before those crowds. And, by the way, without any musical instruments.”

Jay Z’s greatest crime was not that he supported Hillary Clinton. It was that his music didn’t require musical instruments, according to Trump. THE HORROR.

15. “You ever have second thoughts about something?”

Literally every second of every day.

16. “We have triumphed over evil like nobody has seen before.”

17. “The past does not have to define the future.”

“The past isn’t dead. It isn’t even past.” – William Faulkner

18. “I believe it’s a rough situation over there. There’s no question about it.”

Donald Trump on human rights abuses in North Korea: “Rough situation over there.”

19. “And the greatest phrase, I think, in the history of politics is on all of those red and white hats that I see out there: ‘Make America Great Again.’”

Modesty has never been a Trump strong suit. Not ever.

20. “And together, we will make America wealthy again.”

This was Trump describing what the pilots on Air Force One were telling him as the plane was circling above a South Carolina campaign rally. Also: “There’s no way. We cannot stop” is a decent slogan for the Trump presidency.

23. “So please get your asses out tomorrow and vote.”

Real quote from the President of the United States.

24. “Sometimes you have to toot your own horn because nobody else is going to do it.”

25. “We got more money. We got more brains. We got better houses, apartments. We got nicer boats. We’re smarter than they are. And they say, ‘The elite.’”

What, exactly, would this entail? Like, is there a war in space I don’t know about? I feel like I would have heard about this, right?

27. “Great pillows. I actually use them, believe it or not.”

Born into a wealthy family? CHECK. Recipient of millions of dollars from his parents? CHECK. Yup, this all checks out.

This is a line that will live in infamy. Trump, asked directly, “Do you hold Russia at all accountable for anything in particular,” responded, with Russian president Vladimir Putin standing next ton him, with this there’s-plenty-of-blame-to-go-around response.

It’s a stunning response to what should be a very straightforward answer: Yes, I believe our intelligence community and the Senate Intelligence Committee that Russia actively meddled in the election to help me, hurt Hillary Clinton and sow chaos. It’s hard to properly contextualize what it means when the American President, standing beside the Russian President, says that he can’t say whether Putin or the US intelligence apparatus is to be believed.

30. “That just shows when you get good ratings, you can say anything.”

Trump said the quiet part out loud! If you needed Trump’s view on the media – and on life more generally – condensed into a single sentence, this would be the sentence I would write. If you listen closely enough to Trump, he always tells you exactly what he thinks and who he is.

A Republican President offers his thoughts on his own Justice Department.

This is a good line that likely works well even outside of Trump’s most committed base.

The 45th president reflects on the first president: “Didn’t he have a couple things in his past?”

36. “Even one of them recently said that President Trump made promises, but he’s kept many more promises. I mean, far more than I made.”

[gets out scratch paper] So, you say you’ve kept more promises than you’ve made, eh? OK, let me just calculate that out… [head explodes]

Trump on the day after the 2018 election in which his party lost 40 seats and control of the House, not to mention seven governorships and hundreds of state legislative seats. But, sure!

38. “Nobody has ever done so much in the first two years of a presidency as this administration. Nobody. Nobody.”

It’s hard to fact-check this statement because it’s not clear what metric Trump is citing when he says “nobody has ever done so much.” Does that mean bills passed? Executive orders signed? Regulations rolled back? Rounds of golf played?

41. “And when you’re talking about an atmosphere, oceans are very small. And it blows over and it sails over.”

This is not The Onion. This is a real quote. On the “oceans are very small” point: Oceans cover roughly 70% of the Earth’s surface.