One of China’s most prominent harbors for naval shipbuilding has rapidly expanded in the past decade, new satellite images show, amid a massive military modernization push by Chinese President Xi Jinping.

The Jiangnan Shipyard, located in Shanghai at the mouth of the Yangtze River, was only opened in 2008 but it has already increased by 64%, according to satellite imagery analyzed by Washington-based think tank the Center for Strategic and International Studies (CSIS).

“Jiangnan is responsible for some of China’s most advanced warships … The assets produced at the shipyard form an important part of the PLAN’s (People’s Liberation Army Navy’s) modernization,” Matthew Funaiole, fellow at the CSIS’s China Power Project, told CNN.

It comes amid a concerted campaign by Beijing, pushed by Xi, to rapidly expand and update China’s navy, with 32 ships commissioned in 2016 and 2017 alone, according to US government reports.

Speaking from the bridge of the destroyer Changsha in April, Xi said the task of building a strong navy for China had “never been as urgent” and pledged to turn the PLAN into a “world-class force.” 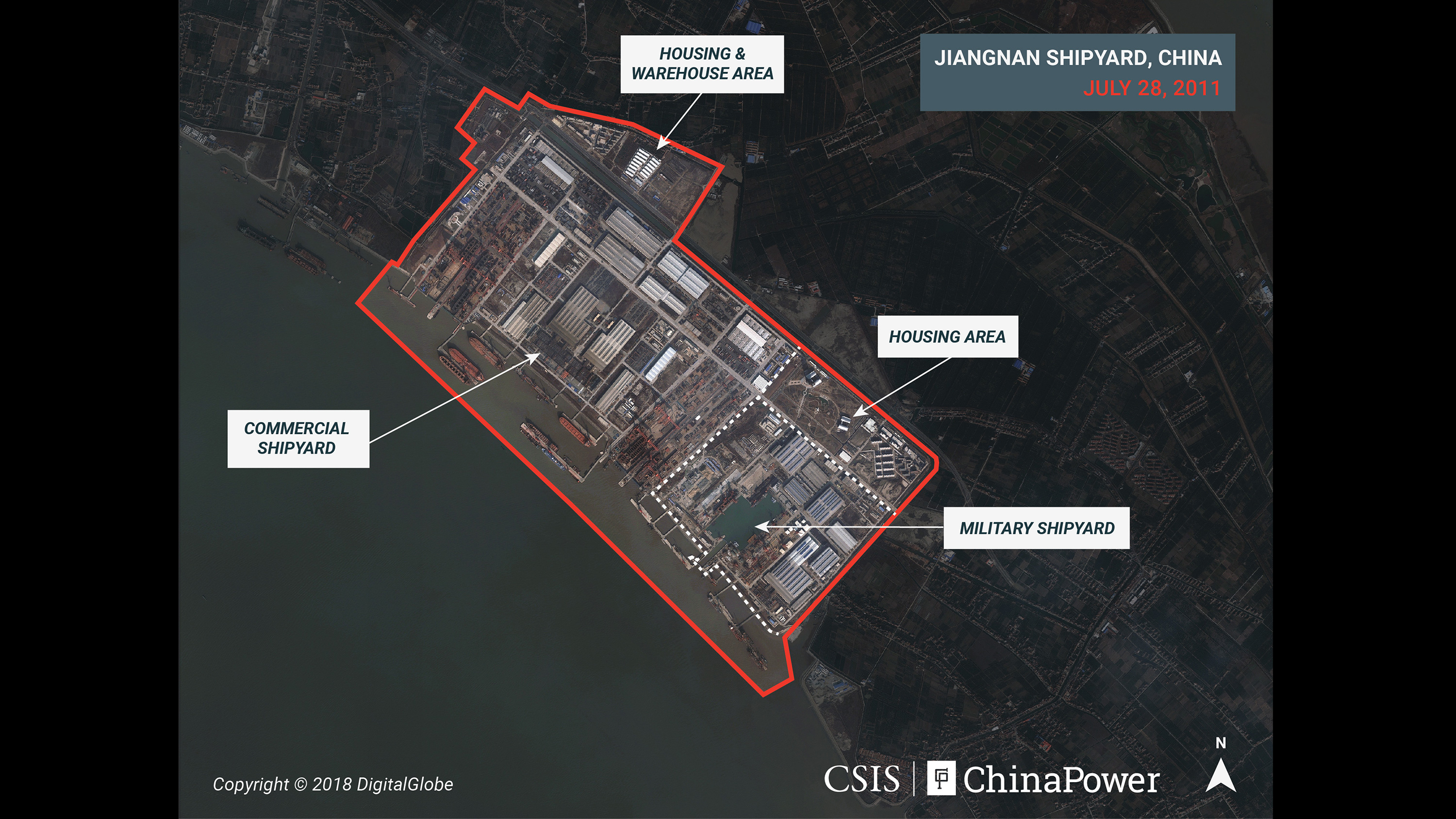 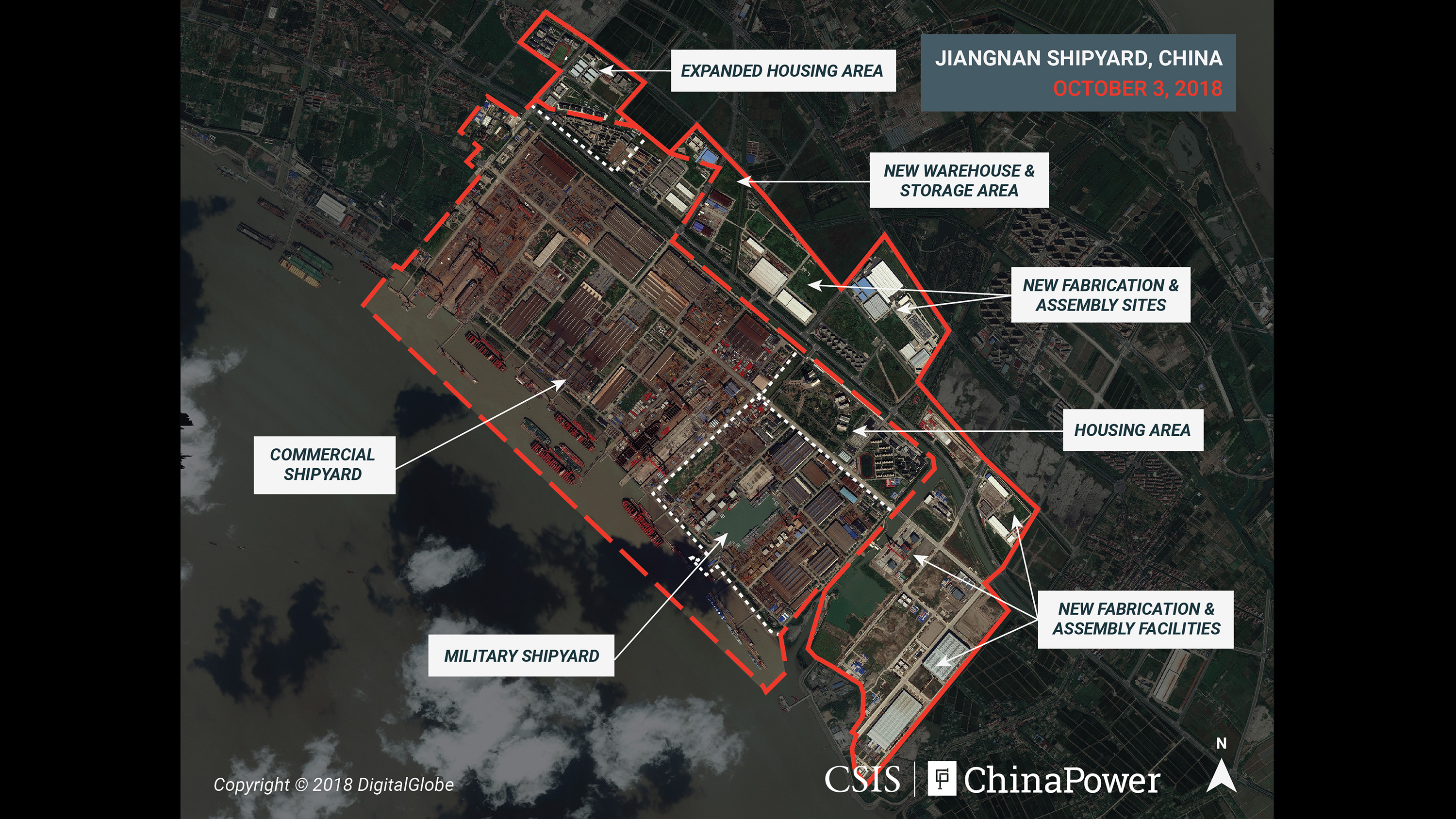 At the Jiangnan Shipyard, satellite imagery has captured some of the PLAN’s newest, most advanced vessels under construction, including a number of Type 055 guided-missile destroyers – Asia’s largest, most sophisticated and most lethal combat ships.

The rapid rise of China’s military and vessel productions stands in stark comparison to the US. Although the US has a clear advantage in the quality, if not quantity, of their vessels, its fleet has faced a steady stream of bad news in recent years.

Two deadly at-sea collisions in the Asia-Pacific have damaged the navy’s reputation, while US government reports claim it will take “decades” to fix shipyards, which are in a “poor condition.”

“The ships being commissioned by China are increasingly of modern design … China’s navy is also now larger than the active fleet of the US Navy. The gap may continue to widen in the coming years,” Funaiole said.

CNN contacted the Chinese government for comment for this article.

An annotated satellite image of a Type 055 destroyer waiting in the dock at Jiangnan shipyard outside of Shanghai.

One of China’s oldest shipyards, Jiangnan was moved from central Shanghai to the island it now occupies, just outside the city, beginning in 2005. The original location first began operating in 1865.

It is only one of a number of large-scale construction yards for Chinese naval vessels, which are being churned out at a steady pace.

While the commercial section of the port has remained almost unchanged in the past seven years, the military sections of Jiangnan have undergone a rapid change.

According to CSIS, two additional production areas were completed, while construction of a new fabrication facility and possibly a wet basin is underway.

Related Article Troubled waters: How Beijing won't back down over the South China Sea

Over the course of 2018, CSIS said it observed significant ship-building and outfitting activity throughout the Jiangnan facility, including up to five Type 052D destroyers and at least two Type 055s.

“The Type 055 is larger and more powerful than most US, Japanese and South Korean destroyers,” Rand Corp. senior analyst Timothy Heath told CNN in July.

Among the other vessels spotted in Jiangnan was China’s home-grown icebreaker, the Xue Long 2, which has yet to be completed but will be a key part of Beijing’s growing Arctic ambitions.

Conspicuously missing was any trace of China’s second domestically produced aircraft carrier, and third in total, which was rumored to be under construction in Jiangnan.

“There are certainly new facilities at Jiangnan, but it’s too early to tell if this is the construction site of the Type 002 … This is something that should be monitored throughout 2019,” CSIS’s Funaiole told CNN.

Unidentified construction in the dock at Jiangnan shipyard outside of Shanghai

While China is rapidly ramping up its naval capabilities, US government reports cast doubts on the US Navy’s ability to build its fleet or even maintain the one it has.

A 2017 US Government Accountability Office (GAO) report found that the US Navy’s shipyard facilities and equipment were in poor condition, creating a backlog of restoration and maintenance that will take at least 19 years to clear.

A GAO report released on December 12 says maintenance on US warships is chronically late – only 30% has been completed on schedule since 2012 – “leading to thousands of days that ships were unavailable for training and operations.”

US Navy/General Dynamics
The future US stealth destroyer, USS Lyndon B. Johnson, is made ready before flooding of the dry dock in Maine in December.

And it’s getting worse. Statistics show that for destroyers, cruisers and submarines, the past year has seen the poorest performance of the seven covered in the report.

ROSLAN RAHMAN/AFP/Getty Images
The guided-missile destroyer USS John S. McCain is seen with a hole on its portside after a collision with an oil tanker outside Changi naval base in Singapore on August 21, 2017. Ten US sailors were missing and five injured after their destroyer collided with a tanker east of Singapore early on August 21, the second accident involving an American warship in two months. / AFP PHOTO / Roslan RAHMAN (Photo credit should read ROSLAN RAHMAN/AFP/Getty Images)

But an October report from the Congressional Budget Office (CBO) says to meet that goal, the US Navy would need a shipbuilding budget 80% higher than the average it has received for the past 30 years, something highly improbable in a time of massive deficits.

The CBO also points out the navy would need to extend the life of its destroyers and some nuclear-powered submarines – a decade longer than planned – to meet its 355-ship goal. But the problem with the shipyards remains.

Still, not all analysts are ready to cede naval superiority to Beijing.

Despite the Chinese fleet’s larger numbers, the US still builds bigger and better ships than China, analysts Ian Livingston and Michael O’Hanlon wrote on the Brookings Institution blog in September.

“If the United States Navy valued number of ships above all else, it could build more small boats with the same budget. But it does not. It deliberately values the size (and quality, and armament) of vessels over their sheer number,” they wrote.