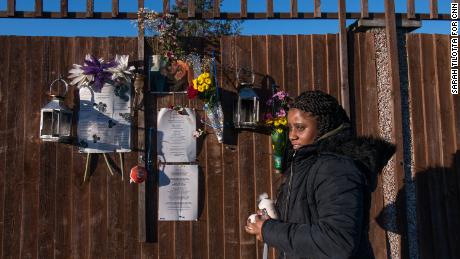 Tilisha Goupall tends a memorial to her younger brother, Jermaine Goupall, at the location where he was stabbed to death in south London in August 2017.

Story by Zahid Mahmood; Photos by Sarah Tilotta, for CNN

London (CNN)After a long day at work, Tilisha Goupall returned to her London home, made dinner and switched on the TV, just like any other night. It was after 10.30 p.m. that she realized her 15-year-old brother, Jermaine, was more than an hour late home from the movies, so she sent him a message on Snapchat. He never read it.

Just minutes later, a police officer and a friend of Jermaine's knocked at her door -- her little brother had been stabbed, they told her. They led Goupall to a spot just two streets away, where the 26-year-old saw blood seeping onto the pavement from a police tent. She pushed past onlookers to talk to the authorities, only to be told Jermaine was dead.
"I just collapsed and cried -- the trauma from that moment made everything black," Goupall told CNN at her home, in the south London borough of Croydon.
Goupall points out the route by which her brother fled from the gang, two streets from their family's home.
It's a scene that's become all too familiar in London, where knife crime is soaring, mostly among young men and boys, some of them incredibly young.
Among just two of the many recent incidents: a 14-year-old boy was left in a critical condition after being stabbed in the stomach by an 11-year-old in July, according to reports. And in the east London borough of Newham, two boys, aged 16 and 13, were convicted of grievous bodily harm for stabbing another 13-year-old boy in September.
Read More
From June 2017 to June 2018, the latest period for which figures exist, the Office of National Statistics (ONS) recorded nearly 40,000 knife or sharp instrument crime offenses. This was the highest in the eight years for which data is available, and a 12% increase over 12 months. Despite the rise, these specific crimes are relatively rare, when compared to the frequency of other violent attacks, according to the ONS.
And in February this year, London's monthly homicide rate briefly overtook New York's for the first time in history. The ONS report says homicides in London rose 14% in the 12 months to June 2018. This year alone, the UK capital has seen 131 murders, police say.
Jermaine Goupall was stabbed near this shop where other boys, who were being chased by the gang, had taken shelter.
Jermaine's death, in August last year, was a horrible case of mistaken identity, Goupall said, a view that has been backed by police. Before his death, rival gangs had been wielding knives and threatening to kill each other in drill music videos posted on YouTube, which have since been taken down. The gang members who killed Jermaine thought he was from a rival gang, according to Goupall.
The gang members, masked and armed with knives, approached Jermaine and some friends in a car. His friends managed to hide, but Jermaine tried to run home and was stabbed in the right thigh, an injury from which he died, Goupall said.
In February, three young men, aged 17 to 21, were found guilty of murder, while an 18-year-old woman was also convicted for manslaughter over Jermaine's death.
One of the rooms in the Goupalls' home, where Tilisha still lives with her father, has been transformed into a memorial with flowers, candles and photographs of Jermaine.
Goupall is seen through the window of her family's front room in Thornton Heath, south London. The room has become a shrine dedicated to honoring the life of her brother, Jermaine.
"I miss everything about him. He was a very loving, funny and happy person," she said, looking at the photographs of her brother.
"It's hard to look at pictures, but I know what they meant when they were taken. When I watch a video and see him laugh, I cry, thinking, 'That's Jermaine -- that's my brother.'"

A lack of opportunity

Data from the Mayor's Office for Policing and Crime shows knife offenses in London are predominately male-on-male crimes. In 2017, 90% of knife crime offenders were male. Of those crimes that actually caused injury, 78% of victims were male. Of all knife crimes, half were carried out by people under the age of 25.
The report says half of victims and half the offenders in London were from an ethnic minority background.
And according to a report by the UK Parliament, 21% of 21,044 cases of knife possession across the country involved children between the ages of 10 to 17.
At a time when gender roles are rapidly evolving, women and girls have been able to cling onto movements that celebrate that change. Campaigns like #MeToo, for example, have been powerful vehicles for women and girls to challenge gender norms and explore what it means to be female.
But boys and men have not organized in the same way, observes comedian Michael Ian Black, a regular commentator on gender.
"No commensurate movement has emerged to help them navigate toward a full expression of their gender. It's no longer enough to 'be a man' -- we no longer even know what that means," Black wrote in a recent New York Times op-ed "The boys are not all right."
Arguing that "America's boys are broken," he wrote that gun violence in the US is more to do with boys being left behind than a lack of gun control.
The same could be said about the United Kingdom's broken boys, only here, knives are much easier to acquire than guns.
One problem is that boys with special needs are sinking in the country's public education system. Years of austerity that has significantly cut funds to youth services hasn't helped either.
A joint study published this year by the UK's Ministry of Justice and Department of Education found that 40% of 10 to 18 year olds who'd carried out knife possession offenses had special educational needs during the 2012/13 academic year. Some 83% were persistently absent from school in at least one of the five academic years from 2008/09 to 2012/13 and, of that number, 21% had been permanently excluded.
An investigation by the UK's Times