CNN Poll: Looking to 2020, Beto O’Rourke on the horizon

As candidates for the Democratic nomination for president in 2020 begin to declare their intentions, a handful of potential candidates hold on to most of the early support, according to a new CNN poll conducted by SSRS, and Texas Congressman Beto O’Rourke is a new addition to the top tier.

Former Vice President Joe Biden continues to top the list when the potential Democratic electorate is asked who they’d be most likely to support for the nomination, with 30% saying they would back him. Vermont Sen. Bernie Sanders lands in second with 14%. Support for each is about the same as in October. O’Rourke lands in third with 9%, up 5 points since October. New Jersey Sen. Cory Booker follows at 5%. California Sen. Kamala Harris and Massachusetts Senator Elizabeth Warren have each dropped 5 points since October and are now below 5% support.

None of the other 14 possible candidates tested hits 5% support.

More than a year out from any primaries or caucuses and with most candidates undeclared, there are few meaningful demographic or political differences in the nomination race. One that helped define the 2016 battle for the Democratic nod between Hillary Clinton and Sanders continues on, with Sanders garnering much more support among younger voters (22% among those under age 45) than he gets among the older crowd (7% of those age 45 and up back him).

Rep. John Delaney of Maryland is the only fully declared candidate in the field of polled candidates, and former Secretary of Housing and Urban Development Julian Castro announced earlier this week that he is forming an exploratory committee. Neither earns 1% in the poll. Others have taken public, though not formal, steps toward running, and several have already made visits to the early primary states of Iowa and New Hampshire.

O’Rourke, the only candidate to make significant gains since CNN last polled on the race in October, said late last month that he hasn’t ruled out a run for president, a shift from his flat denials of a run for the White House during his unsuccessful campaign for Senate earlier this year.

Among all adults, the top tier candidates are generally viewed more positively than negatively. Warren is one exception. She is a frequent target of President Donald Trump, and views of Warren tilt narrowly negative: 32% see her unfavorably, 30% favorably. 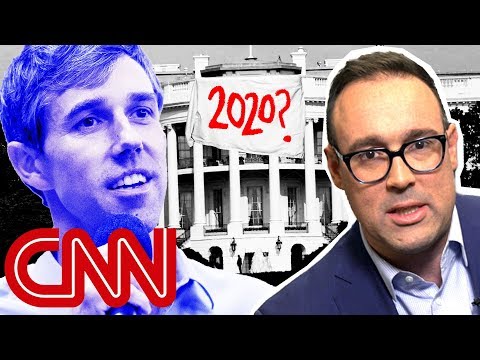 The size of the field suggests the race could go deep in to the primary season, a prospect many Democrats would like to avoid. The poll finds 51% of Democrats and Democratic-leaning independents say it would be better for the party if one strong candidate emerged early on as the clear front-runner for the nomination, while 41% said they’d prefer a number of strong candidates to compete for the nod. That’s a reversal from 2015, when 53% said they wanted to see a number of strong candidates contend for the lead, but only Hillary Clinton and Sanders ended up finding substantial support.

Self-identified Democrats split from Democratic-leaning independents on this question. Partisans are more apt to say they want to see one strong candidate emerge early (57% say so), while independents tilt toward a bigger, more competitive field (50% favor that).

Whoever may emerge from the Democratic nomination fight, just over half of all adults (51%) say they think Trump will lose his re-election bid, that’s up from 47% who said so in October before the midterm elections saw sharp Republican losses in House races across the country. That figure includes 17% of Republicans who think the President will lose.

Less optimism in US economy

Views of the economy – the President’s strongest issue in terms of approval ratings – are beginning to soften, according to the poll. If that trend continues it could prove a threat to his re-election chances. While most still say the economy is in good shape, perceptions of the economy as “very good,” which had reached their highest level since June 2000 in a September CNN poll, have dropped 9 points, and the share who expect the economy to be in “very good” shape a year from now has dipped 10 points. Those declines come almost entirely among Republicans.

Trump has publicly attacked General Motors CEO Mary Barra over the company’s decision to shutter plants in the US, and the poll suggests the public may back his criticism. Overall, 64% say that the loss of any manufacturing jobs in the US is a loss for the nation’s economy because manufacturing is critical to economic success, while just 26% see the loss of manufacturing jobs as inevitable as the economy changes for the better.

But his tariff policies may not prove as popular. Most, 68%, say they see foreign trade as an opportunity for economic growth through exports rather than as a threat from imports.

The CNN Poll was conducted by SSRS December 6 through 9 among a random national sample of 1,015 adults reached on landlines or cellphones by a live interviewer, including 463 self-identified Democrats and Democratic-leaning independents. Results for the full sample have a margin of sampling error of plus or minus 3.8 percentage points, it is 5.6 points for results among the potential Democratic electorate.