‘Sesame Street’ steps up to the biggest issues kids face

Editor’s Note: Kathryn Ostrofsky is an historian of media and American culture who holds a PhD from the University of Pennsylvania and teaches at Angelo State University. She is active in efforts to preserve public media and is writing a history of Sesame Street to be published by the University of California Press. The views expressed here are hers; view more opinion articles on CNN.

When “Sesame Street” debuted in the late 1960s, Americans understood poverty to be one of the biggest challenges facing families, and public energy to fight poverty abounded in President Lyndon Johnson’s Great Society initiatives and Martin Luther King Jr.’s Poor People’s Campaign activism. The founders of the nonprofit production company Children’s Television Workshop tapped into this energy and created “Sesame Street” with the intention that it could serve as a tool to fight poverty.

Now “Sesame Street” is bringing forward a new storyline that fits squarely into that tradition. In America, an increasing number of young children are facing homelessness – and now, they will see that part of themselves on “Sesame Street.” Lily, a 7-year-old Muppet, joined the show in 2011; she and her family were originally described as food-insecure. Lily has joined Elmo, Rosita and the gang in a series of resource videos and activities created to help preschoolers and their caregivers cope with the upheaval of homelessness.

Viewers young and old have come to know “Sesame Street” as the kind of place that comes with you wherever you go, broadcast right into your living room, carried with you as a Big Bird doll or a copy of “The Monster at the End of This Book” or streamed onto your phone. “Sesame Street” is part of many of our homes, and characters like Big Bird, Grover and Cookie Monster are, for a number of us, among our oldest friends.

New York children in a preschool day camp watch the educational television program "Sesame Street," as part of an experiment to prepare them for public schools and sharpen academic skills for their teen instructors.
Bettmann Archive/Getty Images

The program’s unprecedented broadcast run – it debuted in 1969 and its 50th season will air next year – has made it one of the most enduring institutions of American culture.

As Lily shares her hopes and fears, and as her neighbors learn of her struggles and remind her of their love, they all demonstrate strategies for defining home not as a specific location but as the environment created by family and community. In the process, “Sesame Street” is providing support for those facing homelessness while equipping communities nationwide to offer greater friendship and understanding to young children enduring times of transition and dislocation of all kinds. The discussion of homelessness is an important continuation of the program’s founding mission to be an instrument of social education and a resource for children, their caregivers and their educators to overcome adversity.

Cast members of the television show, "Sesame Street," posing on the set with some of the puppet characters around 1969.
Hulton Archive/Getty Images

Their idea was that by offering universal preschool education through a medium that nearly all impoverished families could already access, and by creating a city setting and a pop culture-infused ambiance that specifically welcomed urban minority children and encouraged them to enjoy learning, they could help prime those children for success in school. Education, and the doors it opened, would eventually be those children’s ticket out of poverty. Research shows that “Sesame Street” has helped prepare children, especially boys and those living in disadvantaged areas, for school.

Throughout its run, “Sesame Street” has woven relatable messages about social challenges kids face into regular episodes alongside lessons on literacy, math and cooperation. People who grew up in the 1970s may remember musician Buffy Sainte-Marie helping Big Bird understand that adults’ attention to a new baby did not diminish their love for an older child. Those who watched in the 1980s learned about death when Big Bird came to terms with the passing of beloved storekeeper Mr. Hooper. Children of the 1990s saw teenagers Gina and Savion stand up for interracial friendships, and those who watched more recently saw Big Bird overcome the terrible feeling of being bullied. 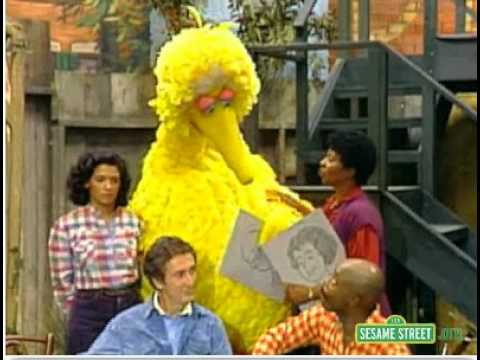 To tackle particularly delicate or frightening subjects, “Sesame Street” often created special initiatives and resources beyond its broadcast content. Before the age of the internet, these efforts included a bilingual radio campaign to promote vaccination, the distribution of 45 rpm records and Bert and Ernie hand puppets to aid local demonstrations of fire safety and disaster preparedness, a Sesame-style remodel of prison visiting rooms in Texas along with training nonviolent inmates in child development to make visiting an incarcerated parent less scary, and an extensive program to recruit a grassroots network of volunteer caregivers in cities from Boston to Los Angeles to use “Sesame Street” to infuse education into daycare.

Israeli muppet Daffy, left, visits Palestinian muppet Haneen on the Palestinian "street'' during taping of the Israeli/Palestinian co-production of "Sesame Street" on April 1,1997.
Will Yurman/Getty Images

A whole branch of the Workshop, initially called “Utilization,” then “Community Education Services,” and more recently reborn as the “Social Impact & Philanthropy” division, focuses on helping parents and educators use the television show and these other materials to support their own efforts to help children grow. The initiative on coping with homelessness joins Sesame Workshop’s more recent endeavors to provide free streaming video and downloadable print resources, available online, for families dealing with military deployment, an incarcerated parent and food insecurity, among other challenges. The initiative on homelessness supports families’ attempts to foster the stability and continuity children need to succeed intellectually. It also dovetails with Sesame Workshop’s major new project to create educational resources for uprooted children worldwide: its collaboration with the International Rescue Committee to use media to reach Syrian and Rohingya refugees in what will be the largest early childhood education intervention in the history of humanitarian aid.

For 50 years, “Sesame Street” has used media to create a community defined not by a physical location but by beloved characters on screen and the public service efforts of its staff in supporting educators and families face a variety of challenges. The program has undoubtedly aided many children over the years, but despite the nation’s mid=century optimism that we were close to eradicating such hardship among our citizens, poverty remains a widespread problem in 2018.

Because its characters provide continuity not only through a child’s development, but across generations, “Sesame Street” is uniquely positioned to support families who are struggling to bring stability to their lives.