Is Laos facing a dam disaster?

First came a boom, shortly followed by the sound of something bursting. Then, a giant wave — big enough to submerge an area the size of Paris in 15 feet of water — washed across southeastern Laos, ripping villages apart, swallowing homes, and dispersing thousands of people.

The failure of a billion-dollar dam in the Lao province of Attapeu in July this year left at least 35 dead and over 7,000 homeless, according to sate-run media.

In the wake of the tragedy, the Laotian government promised to review the safety of existing dams and suspend the approval of new ones. An international team of experts was called on to investigate the root cause of the incident.

But months later, both the review and investigation are ongoing, and work on approximately 50 dams steadily continues.

With hundreds more dams planned for the country, environmentalists are sounding the alarm that the Mekong River system in Laos could be devastated, along with the lives of those relying on it.

Photos: Life along the Mekong
Sokratana Hou/MekongRiverCommission
Mighty Mekong —
Roughly meaning "Mother of Rivers" in Thai and Lao languages, the Mekong River is a sacred lifeline in Southeast Asia.

Photos: Life along the Mekong
Khomkrish Innanchai/MekongRiverCommission
River of many —
The Mekong is not just one river. Thousands of rivers and streams feed into the main river, including the Nam Khan tributary in Laos, pictured here. During the dry season, villagers build a bamboo bridge to cross the river.
Photos: Life along the Mekong
Guang Niu/Getty Images
River of celebration —
It is also a sacred place for local communities. Each April, a water splashing festival takes place on the banks of the Lancang-Mekong River to celebrate the new year for the Dai ethnic minority of Xishuangbanna in southwest China. Similar water festivals take place across Southeast Asia to bring in the new year.
Photos: Life along the Mekong
TANG CHHIN SOTHY/AFP/AFP/Getty Images
River of celebration —
Another water festival takes place in Cambodian capital Phnom Penh each November to commemorate the end of monsoon season. This long dragon boat carrying 179 rowers and measuring 87.3 meters will be on display during this year's water festival.

Photos: Life along the Mekong
CHRISTOPHE ARCHAMBAULT/AFP/AFP/Getty Images
River of love —
Life has flourished in and around the Mekong for millions of years, and continues to do so for the communities and countless species that call it home.

Located in the heart of mainland Southeast Asia, Laos is a sliver of a landlocked nation living in the shadows of neighboring tourist hotspots Thailand, Vietnam and Cambodia.

As a result, the former French colony’s mountains, plateaus and plains look relatively unspoiled — but in reality, they are laced with an estimated 80 million unexploded bombs left over from the Vietnam War.

Laos is traversed by the Mekong River, which flows for 2,700 miles from the Himalayan mountains of Tibet through Myanmar, Laos, Thailand, Cambodia and Vietnam, where it empties into the South China Sea.

But from China to Vietnam, hydropower dams are beginning to disturb the natural flow of the Mekong and its tributaries by holding and releasing water to drive massive turbines, according to the Mekong River Commission, an intergovernmental body regulating developments on the river.

Nowhere is this more pronounced than in the communist state of Laos, where 46 dams operate along the rivers and streams that feed into the Mekong, with a combined power generating capacity of approximately 6,500 megawatts.

Another 54 dams are under construction, with many more in the pipeline.

Added to this are plans for 11 larger hydropower dams spanning the mainstream channel of the Mekong, with a combined generation capacity of at least 10,000 megawatts.

Of these dams, nine are located in Laos and two are already under construction.

As one of the poorest countries in Asia, Laos hopes to profit from exporting power to neighboring nations.

The Lao government aims to increase its power generation capacity to 30,000 MW in the next 12 years, according to figures published by the Ministry of Energy and Mines in 2016.

“If many of the dams that are planned are built it will essentially result in a complete transformation of the river system as it’s been known,” said Maureen Harris, Southeast Asia program director at environmental advocacy group International Rivers, which defends the rights of the rivers and the communities that depend on them.

“You’ll see a stretch of the river that has been free flowing and fast flowing completely changed into a series of reservoirs, or lakes with still water, and that will have knock-on effects to the wider ecosystem.”

Those effects include tearing local people from their land, Harris explained, with residents uprooted, resettled and expected to eke out new livelihoods after generations of depending on the river in the process.

While dam-building companies do have resettlement and compensation programs with a focus on livelihood restoration and raising living standards, Harris said they often fall short. 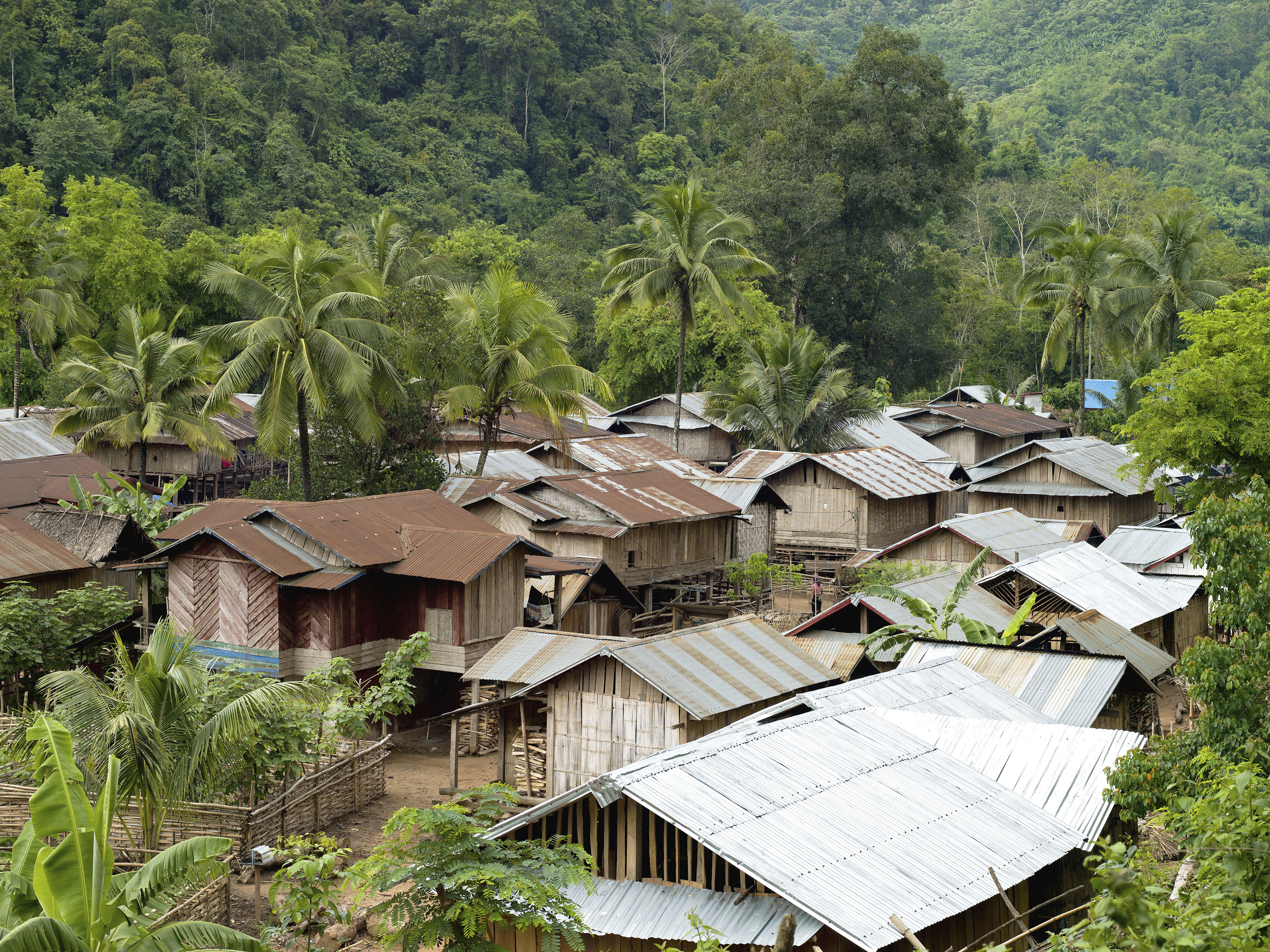 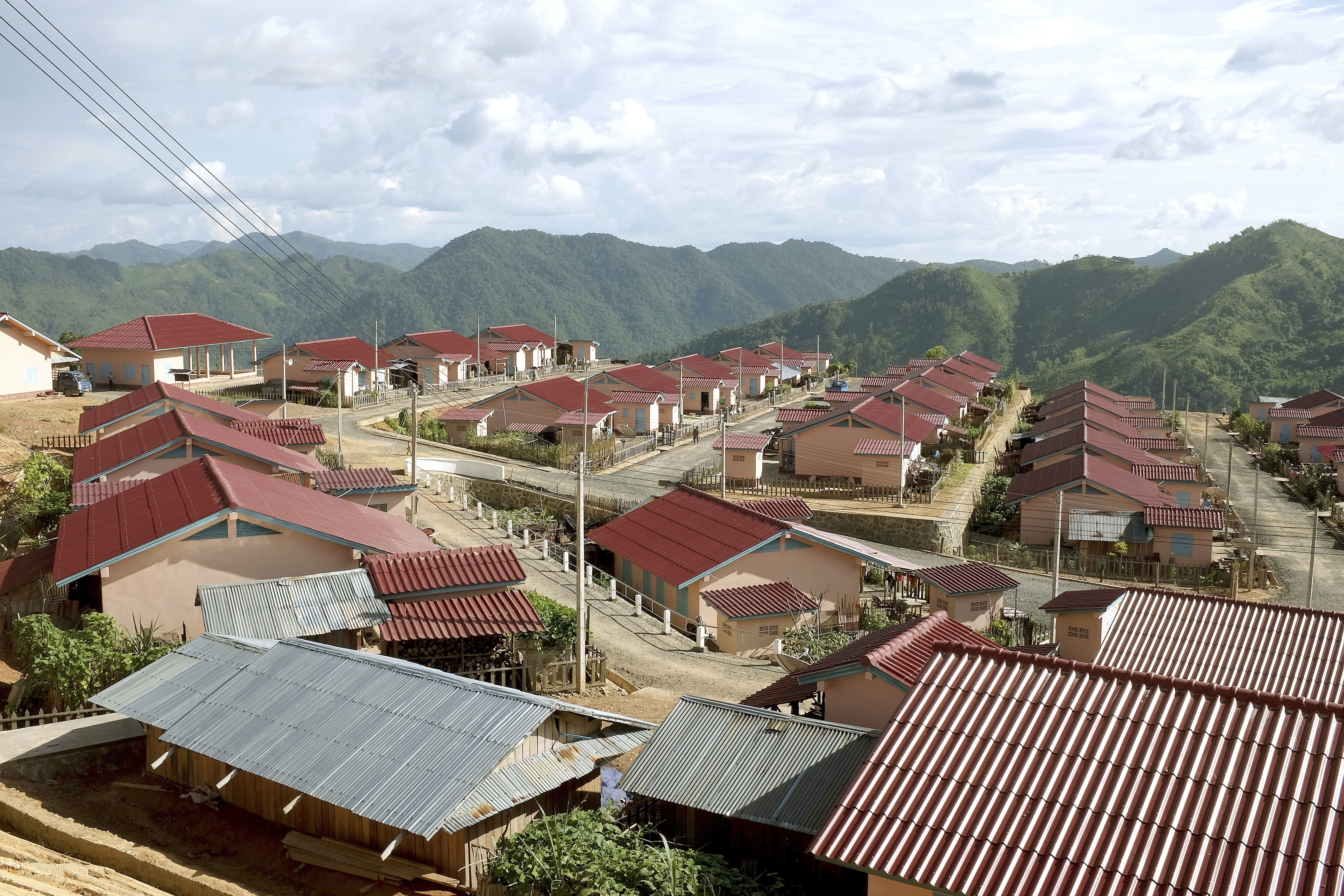 Left: A riverside village in the Nam Ou river valley in Phongsaly Province, before dam construction. Right: A resettled village to make way for the Nam Ou cascade hydropower project.

Life has flourished in and around the Mekong in Laos for millions of years. Each rainy season, the river fills and floods nearby forests and rice paddies before retreating in the dry season to expose fertile soil.

Water buffalo roam its banks and its muddy waters are home to vast amounts of aquatic wildlife, including the endangered Mekong giant catfish and Irrawaddy dolphin.

But environmentalists say the overloading of the river with dams could destroy that ecosystem.

“(These dams) will affect fisheries, fish migrations, livelihoods and economies of communities, like millions of people who depend on natural resources provided by the Mekong basin,” explained Pianporn Deetes, Thailand campaign coordinator for International Rivers.

While dam construction has accelerated in the Mekong, Amazon and Congo river basins, hundreds of large-scale dams have been removed in Europe and North America, according to a recent study by researchers from Michigan State University.

Dams planned for the Mekong could cause the same problems, according to the 2018 “Council Study” prepared by the Mekong River Commission.

The council study predicts a significant decrease in fisheries by 2040, as well as a 97% reduction in sediment load reaching the Mekong Delta.

“While it might seem attractive to develop hydropower in the country … there needs to be much more of a balance in considering what the tradeoffs and what the losses are,” said Harris.

The Lao government doesn’t have the financial or technical capacity to pursue these projects on its own, so it relies on foreign help.

As such, most hydropower dams in Laos are bankrolled by investors from China, Thailand, Korea, Japan and France, explained Courtney Weatherby, a research analyst with the Southeast Asia program at the Washington-based think tank Stimson Center.

“China is one of the largest (investors): at least 50 projects, and about one third of Laos’ total potential is dependent on Chinese financing, investment and/or construction,” said Weatherby.

In most cases, Laos leases land for the dam to the investor for 25 years or so. After that the dam is handed over to Laos.

Laos sometimes owns a small stake in the projects, or the government might be promised a portion of the electricity to use domestically or sell abroad, explained Weatherby.

The majority of electricity generated, however, is sold to Thailand and Vietnam to meet rapidly rising energy demands in mainland Southeast Asia.

While profits from hydropower development across the Lower Mekong Basin could amount to $160 billion by 2040, Laos would obtain just 23% of this share despite the fact that the majority of hydropower projects are planned for the country, according to the council study.

Thailand, on the other hand, could see economic gains of $81 billion, because it is both a major investor and the primary purchaser of Lao electricity exports, according to the study. China, Malaysia and South Korea also stand to profit, researchers said.

However, both Harris and Weatherby cautioned that these figures were probably overvalued.

The key takeaway from the council study, according to Deetes, is that governments should explore other energy options. “Because it is so destructive building these dams,” she said.

But she is not optimistic that Laos will heed the call.

CNN reached out to the Lao government, but it did not respond to requests for comment.

Speaking at the World Economic Forum on ASEAN in September, Prime Minister Thongloun Sisoulith said Laos would continue to study other options for renewable energy, but hydropower development remained a significant source of income.

“We have to ensure socio-economic aspects and the impact of the project potentials on society. However, building hydropower projects is a good way to generate income and renewable, clean energy,” he told the audience.

But the PM added that Laos cannot become a “battery of Asia,” as the country’s capacity to develop electricity is still very limited compared to the demand from neighboring countries.

He confirmed that the government will “continue to take into account” the lessons learned from the July dam collapse.

“In terms of electricity development, we have this commitment to make sure that from now on development of hydropower projects should be based on careful planning and good design,” he said.

Thai villagers affected by the construction of the Xayaburi dam in Laos protest in front of the administrative court in Bangkok.
PORNCHAI KITTIWONGSAKUL/AFP/Getty Images

But Deetes said most of the decision-making around these projects has been behind closed doors.

She said this is certainly the case for two of the hydropower dams under construction on the Mekong mainstream, despite strong opposition from local activists, communities and downstream countries concerned about the wider environmental and social impacts.

They argue that environmental costs are not factored in to the dam approval process and that local communities do not have a chance to participate.

Indeed, days after the Lao government announced a suspension of new projects following the July collapse, it agreed on a consultation process for another Mekong mainstream dam.

During this process, neighboring countries can assess the benefits and risks of the proposed project and Laos has the opportunity to make adjustments to minimize adverse impacts.

But this is only true for dams on the Mekong, as projects on tributaries are not subject to the same consultation process, he added.

“You can find plenty of dams in Laos that have zero mitigation efforts built into them,” said Eyler. “They’re just off the radar of international attention.”

In Laos, he said, with 55 dams under construction, “it’s almost too much to pay attention to.”