The distinctive black-and-white striped fish, also known as a striped beakfish or Ishidai in Japan, has been spotted several times in the kelp beds at Breakwater Cove near Monterey.

“It can’t be mistaken for any local fish,” said Nicholas Ta, who has been diving in the Monterey area almost daily for five years. “Other fish are kind of camouflaged and they kind of match the environment around them.”

Scientists believe the fish made the 5,000-mile trip across the Pacific Ocean in debris from the 2011 tsunami caused by a 9.1-magnitude earthquake in Japan.

Debris from a ‘tsunami invasion’

The tsunami washed huge amounts of material out to sea and created debris fields that became habitats for marine life. When that debris got swept up in the currents that flow around the Pacific, the critters went along for the ride.

“These currents circle around and around and then just depending on local conditions the water may move on shore,” said Jonathan Geller, a scientist at California’s Moss Landing Marine Laboratories.

In the last seven years a number of boats, docks and other items have washed up on the western coastline of North America.

Geller was one of the co-authors of a paper in Science Magazine documenting 289 living Japanese coastal species that reached the shores of Hawaii and North America over a six-year period.

“This fish stands out because it looks quite alien in our water and it’s definitely a species we haven’t seen here before this event,” Geller told CNN, adding that many of the other species found looked like they belong.

“Divers or people visiting the beach may not notice anything that looks unusual to the untrained eye,” he said. “But in fact, some of these creatures could have been part of this tsunami invasion event.” 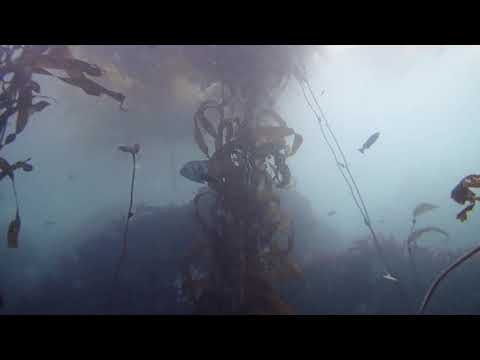 Ta first saw the fish in December 2014 but didn’t know what it was. His friend Dennis Lewis helped him identify the barred knifejaw and they looked for it on future dives.

There were a few more sightings in 2015 and then nothing until October. Ta shot new video of the fish last month.

He said the fish looks pretty healthy and doesn’t have any cuts or torn fins.

Debris, presumed to be from 2011 Japan tsunami, found in Oregon

Starr said the waters of Monterey Bay are about 9 degrees F (5 degrees C) cooler that what the fish are used to in Japan.

Fish from warmer areas can survive the cold, but they often can’t reproduce.

“People have seen multiple fish, it’s not just one, but they’re all the same size indicating that they’re not offspring,” Starr said. “We’re not seeing multiple different size classes, so the best guess right now is that these fish are all older fish that haven’t reproduced.”

Starr said that means they are not likely to become invasive and disrupt the Monterey Bay ecosystem.

Ta told CNN he’s only seen the fish swimming alone or schooled with some local opaleye. He doesn’t know if there are other banded knifejaws hanging around, but he’s hopeful. “I want to believe,” he said.