In its short history, Atlanta United has captured the city’s spirit and taken Major League Soccer by storm. Now, the Five Stripes – in just their second season – are a game away from winning a championship, playing host to the Portland Timbers for the MLS Cup on December 8.

“I said man, I don’t think we could have ever imagined this two years ago,” defender Greg Garza said Thursday after Atlanta defeated the New York Red Bulls 3-1 on aggregate to win the Eastern Conference title.

“Coming into a new project, into a new team, 26, 27 guys who had no idea who each other was and we’ve created something special, not only for ourselves, but for the coaching staff and the city. The city of Atlanta deserves something like this and hopefully we can finish it off.”

Midfielder Julian Gressel envisions “one hell of a party” at a raucous Mercedes-Benz Stadium, where more than 70,000 fans are expected to attend the final.

“(The fans) deserve it,” he said. “They deserve everything. We’ve seen it ever since we came to the league last year. They’ve been absolutely incredible.”

A win would give the city its first championship in a major sport since the Atlanta Braves won the World Series in 1995. But a win isn’t a guarantee. Portland has won the MLS Cup on the road before, doing so at Columbus against the Crew in 2015. In their trip to Atlanta this season, the Timbers played to a 1-1 draw.

The state of Georgia has suffered heartbreak in recent years at this level. The Atlanta Falcons blew a 28-3 lead in Super Bowl LI to the New England Patriots. In January, the Georgia Bulldogs squandered an early lead against the Alabama Crimson Tide, losing the College Football Playoff national championship game.

While it is well known that professional and college football are popular in the South, it wasn’t immediately apparent that another kind of football – the global one – would resonate as well.

But it has, and more. According to Forbes, Atlanta United is the most valuable team in MLS at $330 million.

It turns out Atlanta is a perfect fit for soccer, and it’s somewhat of a surreal scene. Atlanta United flags are seen all over the city, hanging outside of businesses and homes. It’s easy to spot fans wearing merchandise. The fan base spans multiple ages, races and languages. One of the popular chants by the fans is “Vamos! Vamos! Vamos! A-T-L!”

One of those fans is Steve Smith, who played 14 years in the NBA, including five with the Atlanta Hawks. An NBA TV analyst and CNN sports contributor, Smith is also an Atlanta United season ticket holder, describing himself as a “superfan” of the team. He has a spot down on the pitch, and he’s seen high-fiving other fans when the Five Stripes score.

Known as a city of transplants, Atlanta sometimes has had a reputation for not always pulling for the home team in its respective sports. According to US Census data from 2010-2014 analyzed by the Atlanta Region Commission, 37% of the population in metro Atlanta was born in another state, and there are also large groups of residents who were born in other countries.

But Atlanta United has had no trouble from the start in getting support.

COPA90’s Aaron West, who traveled to document the black soccer culture in Atlanta, visibly was blown away by what he saw at a game at the beginning of the season.

The devotion the fans have for the team is reciprocated by coaches and players as well. That includes Martino, who is leaving the club after this season.

“I don’t have the ability to make a tribute to each one of the fans, but if I did, I would,” Martino said. “Because I think that relationship has been great ever since the beginning and just all the affection that they’ve shown for the team.”

The affection has come in jaw-dropping numbers. On June 30, a day that had two World Cup games, the largest crowd in the world at a soccer game was at Mercedes-Benz Stadium, where 71,932 watched Atlanta defeat Orlando City 4-0.

But that’s not even Atlanta’s record. That came on July 15, the day of the World Cup final. After France defeated Croatia, an MLS-record crowd of 72,243 packed in for a 1-1 draw against the Seattle Sounders.

“The fan support, the club’s desire to do things special and differently has been there from Day 1, and it’s carried the team,” midfielder Jeff Larentowicz said.

Watch this. It'll give you chills. pic.twitter.com/GGa6AUN2Vu

Atlanta United has the top eight most-attended MLS games of all time, spanning the the regular season and the playoffs. The playoff record is 70,526, which Atlanta set November 11 in the conference semifinals against New York City FC. Atlanta United also surpassed the 1 million mark for home matches this season at Mercedes-Benz Stadium on that day.

There’s no relegation in MLS – not that Atlanta ever would have had to worry about that. From the beginning of 2017, this team was built to win, becoming the fourth expansion team in league history to reach the MLS Cup playoffs.

And getting this far was something the team thought was feasible from the start.

“You can imagine it,” Larentowicz said ahead of advancing to the final. “I think that was the goal. Even last year, advancing through the playoffs was the goal. From the moment we came together as a team – I feel like I said this a lot last year – we never wanted to make an excuse for ourselves. That was kind of handed down from us by the coach. The players took it on. It’s definitely possible, something we hoped to achieve.”

A sleeping giant in Atlanta has been awakened. Its name is soccer.

The Black Soccer Culture No One Knew Existed 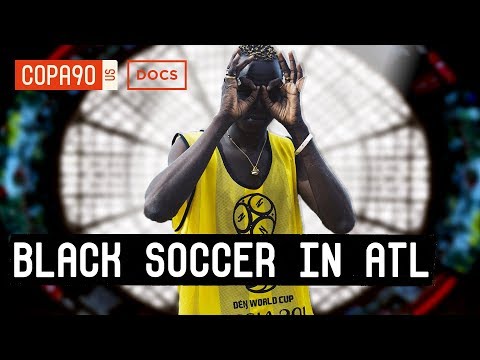