By Rob Picheta, CNN
Updated 9:55 AM EST, Fri November 23, 2018
Ad Feedback
Video Ad Feedback
World News
John Allen Chau/Instagram
Now playing
00:36
US missionary killed by isolated island tribe
CNN
Now playing
02:29
Hear Blinken lay out case for why world should care about Ukraine
Getty Images
Now playing
02:42
Did Biden and Putin cut a deal? Here's why Ukrainian officials are 'suspicious' that happened
UK Parliament TV
Now playing
02:33
See Boris Johnson grilled by British Parliament amid 'Partygate' scandal
CNN
Now playing
03:16
See inside princess' $535 million villa that's up for auction
PYEONGCHANG-GUN, SOUTH KOREA - FEBRUARY 14: Cross country skier Pita Taufatofua of Tonga speaks during a press conference at the Main Press Centre during the PyeongChang 2018 Winter Olympic Games on February 14, 2018 in Pyeongchang-gun, South Korea. (Photo by Mike Lawrie/Getty Images)
Mike Lawrie/Getty Images AsiaPac/Getty Images
Now playing
03:25
Tongan Olympian Pita Taufatofua raising funds to support his home country
Russian tanks take part in a military drills at Molkino training ground in the Krasnodar region, Russia, Tuesday, Dec. 14, 2021. Russia on Tuesday carried out military exercises in the Rostov region near its border with Ukraine. Tensions between the two countries rose in recent weeks amid reports of a Russian troop buildup near the border that stoked fears of a possible invasion -- allegations Moscow denied and in turn blamed Ukraine for its own military buildup in the east of the country. (AP Photo)
AP
Now playing
03:17
Ukraine intelligence shows 127K Russian troops poised to invade
Getty Images
Now playing
02:16
Researchers identify new suspect in decades-old Anne Frank mystery
CNN
Now playing
02:01
A look back at Boris Johnson's history of lying
Petro Poroshenko vpx
CNN
Now playing
00:50
Former Ukrainian president on how to handle Putin
Maxar Satellite Images
Now playing
02:05
Before-and-after images show scale of devastation in Tonga
Chidiebere Ibe
Now playing
02:24
Artist behind viral image of Black fetus speaks out
CNN
Now playing
02:00
'I think it is a retaliation': Why Iranian-backed group may attack the UAE
Australian Federal Court
Now playing
02:46
Watch judge rule against Novak Djokovic over visa appeal
File photo of Christine Ching-Kui Lee, the suspected agent named by British national security service MI5 on a security alert sent to all MPs by Speaker\'s Parliamentary security team on behalf of MI5 on Thursday Jan 14, 2022. Parliamentarians were told Christine Lee has been monitored by the security services for some time but has not been arrested and is not being expelled as it stands. An attached alert saying she was knowingly engaged in political interference activities on behalf of the United Front Work Department of the Chinese Communist Party. (British Chinese Project handout photo)
EyePress News//Reuters/FILE
Now playing
03:42
Exclusive: CNN reveals government links to alleged Chinese operative
Former Syrian intelligence officer Anwar Raslan (L) arrives in the courtroom at a courthouse in Koblenz, western Germany, on January 13, 2022 on the last day of his trial where he was sentenced to life in jail for crimes against humanity in the first global trial over state-sponsored torture in Syria. - Anwar Raslan, 58, was found guilty of overseeing the murder of 27 people at the Al-Khatib detention centre in Damascus, also known as "Branch 251", in 2011 and 2012.
Thomas Frey/Pool/AFP/Getty Images
Now playing
04:29
Why the life sentence for an ex-Assad regime torturer matters
CNN —

They almost certainly won’t know it, but the lives of a secluded tribe on an ultra-remote island in the Bay of Bengal have been thrown under a rare and unwelcome spotlight this week.

American missionary John Allen Chau appears to have been killed by the Sentinelese, an uncontacted tribe with a history of murdering unwanted intruders, which has no connection whatsoever with the outside world.

They represent some of the last people on earth whose way of life remains entirely undisturbed by modern civilization.

Sentinelese tribe thought to have killed American 'world's most isolated'

But they are not quite alone. There are around 100 such tribes that are known about around the world, said Jonathan Mazower of Survival International, which campaigns for the protection of isolated tribes.

The majority are found in the Amazon rainforest, while some lesser-understood groups exist in New Guinea, in forests and on islands elsewhere around the globe. These nomadic hunter-gatherers shun industrial society at any cost – and on the occasions when modernity comes to them, the results are usually violent.

“Sometimes they will have in their collective memory a massacre, a violent incident, or a disease or epidemic – so very often, there are well-founded reasons for these tribes to not want to have anything to do” with the outside world, Mazower told CNN.

When contact does occur, it can prove fatal – tribespeople frequently attack intruders, and can also fall victim to common diseases like the flu, for which they have no immunity. “Often, they are very fearful of outsiders – with very good reason,” Mazower said. 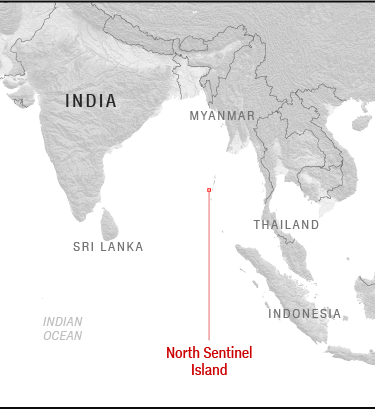 Chau is not the first person to fall victim to the Sentinelese after intruding on their island, which it is illegal for outsiders to land on. In 2006, members of the tribe killed two poachers who had been illegally fishing in the waters surrounding their home island, North Sentinel Island, after their boat drifted ashore, according to Survival International. Two years previously, in the wake of the ruinous 2004 tsunami in the Indian Ocean, a member of the group was photographed on a beach on the island, firing arrows at a helicopter sent to check on their welfare.

Expeditions were made to the island frequently in the 1980s and 1990s, where gifts were often left for its people, but these have since dropped off. According to India’s 2011 census, only 15 Sentinelese were estimated to remain on the island. India’s government has stuck to an “eyes-on and hands-off” policy to ensure that poachers do not enter North Sentinel Island, according to the country’s Ministry of Tribal Affairs. 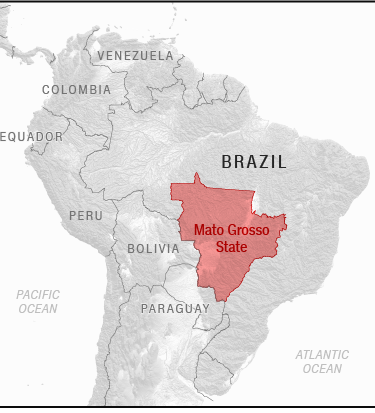 Often on the move through Mato Grosso, Brazil, this tribe left tools and pieces of their homes as the only clues to their existence for decades. But in 2013, a Brazilian government employee made a chance encounter with the group, capturing them on video for the first time. In the clip, members of the tribe walk through the forest naked and holding arrows, before fleeing when they sense an outsider nearby.

But this wasn’t the only contact the Kawahiva have had with people from the outside world. “There are thought to be probably no more than 30 left, the others having been massacred by campers and loggers,” Mazower explained. And their future is an uncertain one, with the area surrounding their territory rapidly being cleared for agricultural work. “Their situation is probably the most urgent now of any uncontacted tribe, because the part of Brazil where they live is extremely violent,” he added. 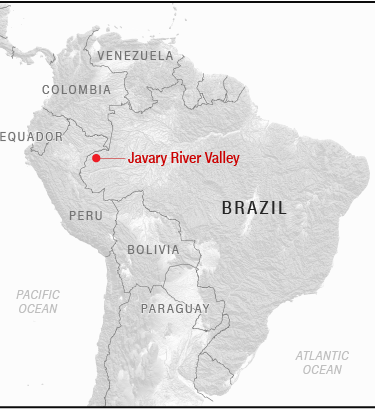 In August, another uncontacted tribe in the Amazon were caught on film for the first time. A drone camera caught tribespeople in the Javery River valley, although none appear to notice their observer. One of the figures carries a spear or pole, while four or five others stand near what seems to be a thatched structure.

The area along the Brazil-Peru border is home to many of the world’s uncontacted groups. “Its not that they’ve never had contact with the outside world – they have contact with other groups around there, and they may be befriended to them or married into them,” explains Evan Killick, a senior anthropology lecturer at the University of Sussex, who has studied tribes in the area. “The reason they’re isolated is precisely because of a history of violence and a history of exploitation,” he said. 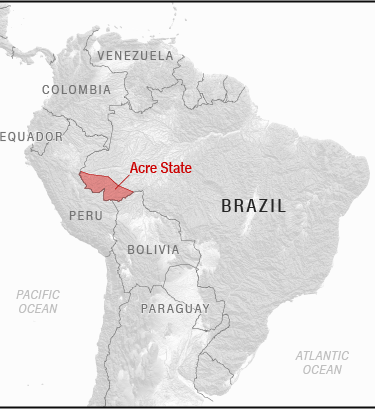 Unlike most uncontacted tribes, this group initiated a first-ever encounter with the surrounding world themselves. An extraordinary video released by Brazil’s National Indian Foundation FUNAI shows the tribesmen, who live in Peru, leaving their dwellings to request bananas from nearby villagers.

“One of the young men asks the Brazilian officials, “rani mi mulher?” (where are your women?),” explained Giancarlo Rolando, an anthropologist at the University of Virginia who has studied the tribe. “In those videos, it is also possible to see a young man holding a rifle that apparently was seized from a group of outsiders that went into their territory.”

“As many other Indigenous peoples of Amazonia, these peoples are bow hunters,” he added. “They also plant gardens, in their case the main staple is corn, though they also plant yucca and plantains. In addition, they fish and harvest forest products like mushrooms, fruit, medicinal plants, and palm leaves for roofing. Their traditional residential pattern is to live on longhouses, built on hill tops.” Since that encounter, the Xinane have been relocated by FUNAI agents to a nearby settlement. 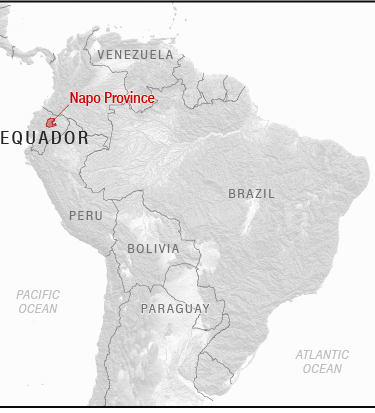 In 1987, a Roman Catholic bishop and a nun intending to spread the word of God met a fate similar to that of Chau at the hands of the Waorani, a group of native Amerindians in Ecaudor. Bishop Alejandro Lavaca and Sister Ines Arango were sacrificed by the tribespeople in brutal fashion, their bodies pinned to the ground by 21 wooden spears and their wounds stuffed with leaves to stop the blood flowing, the Washington Post reported at the time.

Most of the tribe have since been contacted and many have been forced to relocate due to oil exploration on their land, Survival International says. The group has occasionally clashed with the nearby Taromenane, a small section of the Waorani which has continued to remain uncontacted – especially in 2013, when two Waorani tribespeople were murdered by a member of the Taromenane group. 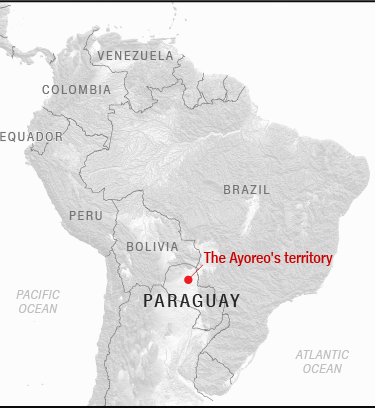 While most of the thousands-strong Ayoreo tribe have been contacted and have assimilated into mainstream society, the last few members who have remained isolated represent the last remaining uncontacted tribe in South America outside of the Amazon, Survival International says. Much of the group was forced out of their forest by American fundamentalist missionary expeditions in the 1970s, who would spot their camps from afar and make contact. “In those encounters several people died, and many Ayorea died later due to diseases,” said Mazower.

Disease is a major threat to uncontacted tribes around the world. “We’re talking about things like flu or measles, because they have no antibodies or immunity, so they are very often fatal,” he added. Dozens of Ayorea died from respiratory diseases in the 1980s.

Groups like Survival International attempt to raise awareness of the plight faced by the little-known tribes, many of which are at risk from plantations, deforestation and violence.

While the Sentinelese are protected by Indian laws which make it illegal to intrude on their island, most uncontacted people do not have the same fortune, their habitats instead being encroached upon by unwelcome outsiders.

“The most important challenge, by far, is to protect their land,” Mazower said. “That is the absolute essential. If their lands are protected, which is their right under international law, then there is actually no reason they should not continue to survive and thrive.”