The votes are cast – and, mostly, counted.

In one of the most highly anticipated midterm elections in modern political history, things went, largely, as polls predicted they would. Democrats cleaned up in the suburbs, using a massive gender gap among women to retake the majority they lost in 2010. In the Senate, geography was destiny; the map was heavily tilted toward Republican-friendly states where President Donald Trump remained popular – and the GOP scored a series of wins in those states. The governors races produced a split decision; Democrats won in Michigan, Illinois and, somewhat surprisingly, Kansas; Republicans, however, won the two big prizes on the map in Florida and Ohio.

We’re still sifting through the data and there are a number of races that are still uncalled. But we know a lot. And here are my big takeaways from another amazing night in American democracy:

1. The year of the woman

House Democrats placed a MASSIVE bet on women in their plan to retake the majority. Dozens and dozens of Democratic female candidates jumped into races across the country. Democrats tailored much of their messaging on health care, on taxes, on everything to female voters – especially in the suburbs. That was clearly the right bet. Women made up 52% of the overall electorate, according to preliminary exit polls, and they went for Democratic candidates over Republicans by 20. According to the Cook Political Report’s Dave Wasserman, there will now be more than 100 women in the House in 2019 for the first time in history.

If you are looking forward to 2020, the results from Tuesday night suggest that a female candidate running to be the Democratic nominee against President Donald Trump may well have a major advantage.

In the closing days of the campaign, Trump went back and forth on whether or not this election was a referendum on his first two years in office. At times, he acknowledged that it was, telling roaring audiences that a vote for [fill in the blank Republican candidate] was effectively a vote for him. At others, Trump sought to note that his name wasn’t on the ballot – and that he couldn’t be held responsible for whatever happened to Republicans.

The split decisions – Democrats win the House majority, Republicans keep control of the Senate – is fitting in an election about Trump, the single most polarizing President in modern politics. Trump allies will insist that without him, Republicans would have lost the Senate and the House. Trump detractors – including some Republicans – will argue that Trump cost them any chance at keeping control of the House. 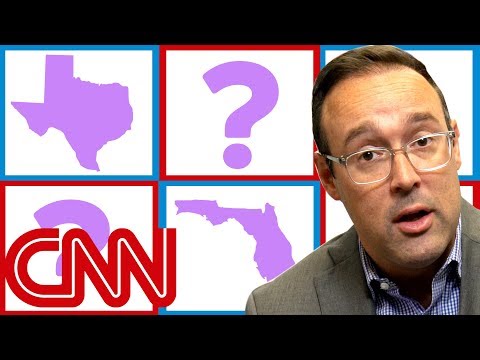 3. Mitch McConnell is still the smartest guy in Senate politics

For a time over the summer, there was talk that Democrats could win the Senate. McConnell never panicked, kept Trump on board and delivered the goods – again – on Tuesday night. Wins in Florida, Indiana, North Dakota, coupled with Republicans holding their own endangered seats in Tennessee and Texas, not only kept the Senate in GOP hands but expanded the party’s majority – giving them some wiggle room on tough votes over the next two years.

This was a map – 26 Democratic seats up as compared to nine for Republicans – that Republicans should have capitalized on. And while they didn’t run the table – Joe Manchin in West Virginia, for one, won – they picked up seats in a national environment that clearly favored Democrats. That looked unlikely as recently as a month ago.

4. Sherrod Brown is someone Democrats should listen to more

The Ohio Democratic Senator cruised to a third term on Tuesday night against a credible opponent – Rep. Jim Renacci (R) – in a state that Trump won by eight points two years ago. That won’t get all that much attention – no one on either side thought Brown would lose – but it should, as the party turns to 2020. Remember that Trump is President because of 80,000 votes in Wisconsin, Michigan and Pennsylvania. The Midwest is, literally, where he built his path to the White House – and where he will look again in 2020.

“Let our country – our nation’s citizens, our Democratic Party, my fellow elected officials all over the country – let them all cast their eyes toward the heartland, to the industrial Midwest, to our Great Lakes state,” Brown said in his victory speech. “And we will show America how we celebrate organized labor and all workers - the waitress in Dayton, the office worker in Toledo, the nurse in Columbus, the mineworker in Coshocton. That is the message coming out of Ohio in 2018, and that is the blueprint for our nation in 2020.”

He’s right. And what Brown proved on Tuesday night is that a Midwestern liberal populist can win – and win easily in what will be the key battleground in 2020. If you’re looking for a dark horse in the 2020 Democratic field, you could do a lot worse than Brown.

Speaking of 2020 and Brown, the easy reelections of Sen. Kirsten Gillibrand (D-N.Y.) and Sen. Amy Klobuchar (D-Minn.) will almost certainly serve as springboards for 2020 presidential bids. Klobuchar had more than $5 million in the bank as of mid-October while Gillibrand had $10.6 million. All of that money could be ported directly over to a presidential bid.

Klobuchar will likely position herself as someone, like Brown, who has demonstrated an ability to run and win in the Midwest, with a coalition that goes beyond just Democrats. Gillibrand is likely to cast herself as a liberal warrior for women in the Senate and as someone, being from New York, who knows how to stand toe-to-toe with the current President.

I’d be very surprised if either of them DON’T run for president at this point.

6. All of Democrats’ BIG national rising stars got wiped out

That knocks out the three biggest potential stars coming out of this election for Democrats. Yes, Alexandria Ocasio Cortez won – but we all knew she was going to after she beat Joe Crowley in a primary in an overwhelmingly Democratic district in New York City.

Politics abhors a vacuum, so other rising star Democrats will fill the void left by the losses of Gillum, Abrams and O’Rourke. (And keep an eye on O’Rourke. I could see him trying to use his narrow-ish defeat as a way to run for president in 2020.) I’d watch Gretchen Whitmer, who got elected governor in Michigan, Jared Polis, the first openly gay governor in the country (he’s from Colorado) and the new governor of New Mexico, Michelle Lujan Grisham.

7. Republicans won the biggest governor’s races in the country.

If you asked Democrats going into Tuesday night which governor race they wanted to win the most, they’d likely name Florida first and then Ohio. They won neither. And there’s meaning well beyond simply losing at the gubernatorial level. Both are swing states – maybe the two swingiest states – going into the 2020 presidential election, and it’s always better to have a governor’s political machine working for you rather than against you in a swing state. And Republicans will have the upper hand in redistricting in 2021 in that trio of states – which matters a whole hell of a lot.