Barbra Streisand’s opposition to President Donald Trump is giving her something to sing about.

The legendary singer has a new album coming out Friday titled “Walls” that, she said, embodies her feelings about Trump and his presidency.

“I would lie awake at night with Trump’s outrages running through my head, and I had to do another album for Columbia Records, so I thought, why not make an album about what’s on my mind?” she told the New York Times. “I am so grateful to have music in my life as a way to express myself.”

Barbra Streisand in 2016 on fame, power and the need for good girlfriends

One single, “Don’t Lie to Me,” has already been released.

“Truth has always worked for me,” the singer told the newspaper about the political climate, “so to see the truth defiled every day is very, very painful for me.”

Streisand is aware, she said, that not everyone will be happy about her new project.

“I can only be true to me as an artist and if people like it that’s great, and if they don’t, they don’t have to buy it or listen to it,” she said. “But me in real life is more important than me as the artist. As a citizen, that’s the role.”

One byproduct of her new album is that the often-private singer is trying something some fans thought they might never see: Streisand is set to appear Thursday in a segment of “Carpool Karaoke” on “The Late Late Show with James Corden.” 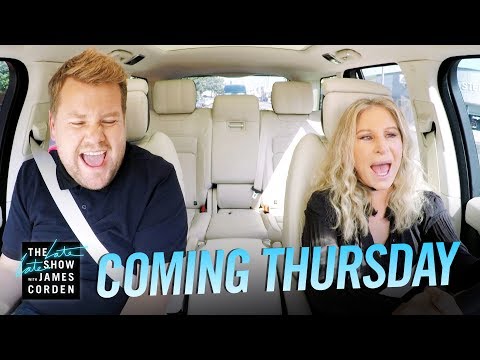 The superstar tweeted a preview of her appearance and revealed that she indulged in a few firsts with Corden.

They say there’s a first time for everything… can you believe this was my first time singing out loud in a car? Had so much fun with @jkcorden - tune in to @latelateshow Thursday night! #BarbraWalls pic.twitter.com/MFsOF2hzpc

“They say there’s a first time for everything… can you believe this was my first time singing out loud in a car?” she tweeted. “Had so much fun with @jkcorden - tune in to @latelateshow Thursday night! #BarbraWalls.”