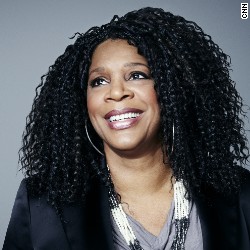 Editor’s Note: Roxanne Jones, a founding editor of ESPN Magazine and former vice president at ESPN, has worked as a producer, reporter and editor at the New York Daily News and The Philadelphia Inquirer. Jones is co-author of “Say it Loud: An Illustrated History of the Black Athlete.” She talks politics, sports and culture weekly on Philadelphia’s Praise 107.9 FM. The views expressed here are solely hers. Read more opinion on CNN.

Kelly, who never really seemed like a good fit for the NBC morning show, overplayed her popularity earlier this week when she passionately defended people who don blackface costumes for Halloween – a thing that most Americans understand is definitely not okay, unless their intention is to offend.

“But what is racist?” Kelly asked on her show. “Because you do get in trouble if you are a white person who puts on blackface on Halloween, or a black person who puts on whiteface for Halloween. Back when I was a kid that was OK, as long as you were dressing up as, like, a character.”

The backlash was swift. Kelly was roasted across social media and more importantly her colleagues and bosses were appalled by her comments. NBC executives forced Kelly to apologize first, internally to her colleagues, and then to the viewers.

But Halloween is tricky and the blackface flap didn’t die down.

Ironically, for me, the most revealing part of Kelly’s explosive comments was their illumination of her true face as an out-of-the-closet racist, in my opinion.

I didn’t buy Kelly’s innocent act of contrition. Maybe I’ve just become desensitized to these knee-jerk, teleprompter apologies for public misdeeds. Maybe we all have. Maybe we should.

But Kelly shouldn’t be surprised that her racist statements met resistance. And she shouldn’t be surprised that NBC, like so many other employers who have taken action against talent for incidents of racism, has apparently decided that her brand of bigotry is simply not worth the risk anymore. Even her NBC colleague Al Roker, who said Wednesday, “The fact is, she owes a bigger apology to folks of color around the country.”

This is not Megyn’s first go around with racially-tinged talk. We know her history; we’ve watched her on Fox, stirring up political divisiveness and animosity. We listened to you spout white privilege with your snarky comments: “Jesus was a white man … as is Santa.” That’s just a historical fact, you claimed. Though a quick check of the Bible doesn’t back up your statements. You also said the young girl in Texas shown being manhandled by a cop in a viral video “was no saint,” and criticized others, like Stephen A. Smith and then-Baltimore mayor Stephanie Rawlings-Blake, for apologizing for their own racially insensitive comments.

Despite her history, I was initially willing to cut Kelly some slack. When she landed her $69 million deal and moved to NBC from Fox under a cloud of controversy over her divisiveness, many, myself included, resented that Kelly bumped out fan favorites (and two black journalists I admire greatly) Al Roker and Tamron Hall. But I told my peers to give her a chance.

Kelly had impressed me at the presidential debates back in 2016. She was strong and came across as a solid journalist who’d done her research. She stood up to then-candidate Trump’s misogynist bullying. I respected her for that even if I didn’t agree with her politics.

But she failed to live up to that respect. Like many people recently, Kelly fell into the trap ensnaring a lot of undercover bigots in America today.

We all know them by now thanks to social media, which has shamed these over-zealous white people for falsely accusing innocent blacks of wrongdoing.

We know them as “Permit Patty,” a.k.a. Alison Ettel in San Francisco, who called police in July on an 8-year-old girl who was selling water bottles as part of a school fundraiser, or New York’s “Cornerstore Caroline,” a.k.a. Teresa Klein, who recently accused a 9-year-old boy of sexual assault and called the police. Ettel later resigned from her job, and in Klein’s case, the store’s video later showed the boy’s backpack had accidentally grazed her.

Mowing lawns, taking a nap in a dorm, sitting in Starbucks, trying to enter your apartment after a long day at work – it’s alarming the rate at which whites have used police to try and intimidate black people for simply being in their space. It’s no wonder Kelly feels empowered to reveal her racist opinions on national television.

Related Article At Yale, Starbucks and everywhere else, being black in America really is this hard

Sadly, these offenses are felt almost daily for black folks, even me. My former business partner and neighbor recently felt free to throw out the N-word with his friends while we were at work. Then he laughed about it when a guy standing nearby pointed out that I was in earshot. Like Megyn Kelly, he too later apologized. But I had already seen his true face.

I get that underground racists feel emboldened by a President who declares on national TV, “Absolutely I am a nationalist.” They think they can now push the boundaries of what it means to be a racist. They think they can redefine the meaning of racism by arguing that they don’t believe in being PC – which to me means that they want to be free to deny the humanity and equality of others who are not like them.

What they don’t get is that we will not allow the clocks to be turned back to a time when the only thing right was white.

Too much blood has been shed in the fight for equality. It’s a new day. And this time, the voices for equality are amplified. More Americans across every demographic believe in their own inalienable right to justice and equality.

We don’t believe in political correctness, either. Not the type that says we have to be silent and do nothing in the face of your hatred. No. We are fighting back. We are organizing, using social media to ostracize blatant acts of racism. And we will hold accountable anyone who uses hate to try and demean us and deny our equality.

Megyn and her ilk may follow the bitter road that leads out of Washington. But beware: we are coming for you. Armed with new allies, more political awareness, technology and our growing financial power. We won’t go backward.