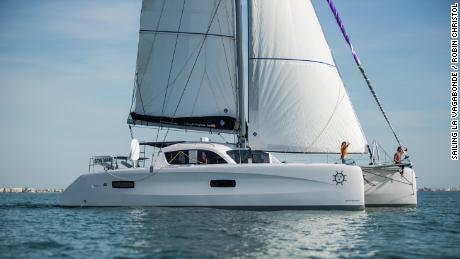 (CNN)From the Bahamas to the Mediterranean, through pirate scares and close calls with superyachts.

Riley Whitelum and Elayna Carausu have spent the past four years sailing to wherever their hearts desire.
Back in 2014, they were just two Australians traveling Europe. The story goes: boy meets girl, boy invites girl sailing, girl quits job, boy and girl sail the world together on "La Vagabonde."
The couple packed up their lives and moved on board Whitelum's monohull -- a 2007 Beneteau Cyclades -- which he was single-handedly sailing around Greece when he met Carausu. From there, they began living an alternative lifestyle on board a yacht -- all while documenting it on YouTube.
In fact, they've gained such a following (3.8 million views per month) that they've become sailing's most popular vloggers. They not only have "Patrons" who fund all their travel and expenses, but luxury French shipyard company Outremer kitted them out with a discounted 48ft Catamaran just last year.
Read More
It's a big step up from where they first began -- navigating a boat with barely any experience.
Riley Whitelum and Elayna Carausu have been sailing together since 2014.

'Help, Google! My boat is sinking!'

"I probably had 10 hours sailing on a friend's boat about 10 years before I bought my boat," 34-year-old Whitelum tells CNN while anchored at Nassau in the Bahamas.
"I hoisted a mainsail twice -- that's the little catchphrase I use," he laughs.
Since then, the couple have sailed more than 65,000 nautical miles. They've sailed anti-clockwise around the world from Europe to New Zealand, crossed both the Atlantic and Pacific Oceans and everything else in between.
Whitelum had barely any experience when he began sailing single-handedly.
Whitelum, who's your typical down-to-earth, happy-go-lucky Aussie, says a lot of what they learned about sailing was through experience, though that hasn't been without a little Googling.
"He woke up to a lot of water in the boat," says Carausu, "and the first thing he did was Google 'help, my boat is sinking!' and he found the answer believe it or not!"

The adventurous couple can't help but finish each others sentences when they talk, which may not be surprising given how much time they spend with each other in such a confined space.
With the 48ft catamaran being their home, and often the only place they can walk around when they're in the middle of the Atlantic Ocean, the couple are navigating both a working, and personal relationship.
"I would say the first six months were really difficult between Riley and I," Carausu says, while Whitelum laughs: "Oh, I was gonna say easy!"
"He was the captain," Carausu continues, "and he didn't like telling me what to do but sometimes it's a safety issue and you have to tell people 'Elayna you can't do that because ...'
"I don't like being told what to do," she adds.
"We're both pretty stubborn so there was a little bit of a clash but we managed to figure out a way to overcome that and that was just realizing that most of the issues that happen onboard are just boat related. It's nothing to do with Riley and I.
"As soon as we step on land and we don't have the responsibility of the boat anymore, we're sweet -- we have a really good time together, but when the weather's bad or something like that, yeah, things can get a bit stressful. So it was just realizing that."
Before joining Whitelum onboard La Vagabonde, Carausu was living on the Greek island of Ios playing music at restaurants and bars. It's here that she met Whitelum out one night, who asked her to come sailing.
Carausu met Whitelum while she was living on the island of Ios in the Greek Islands.
"That first sail to this day was one of the best sails we've ever had -- just conveniently enough!" Carausu says.
"There were no waves, it was perfect wind, the boat was heeled over so I could dip my feet in the water and I thought that that was what sailing was like," she laughs.
A month after meeting Whitelum, Carausu quit her job and joined him to sail around the rest of the Greek Islands before she flew back to Australia.
"He asked me if I'd come back from Australia to live on the boat and keep sailing with him," she says, "and that was a big commitment but it was one of those things where I would just hate myself had I said no.
"I had to go home and sell my van which I was living in at the time in Australia, and I had a whole bunch of stuff, like scuba diving gear, and I just sold all of that to take the chance with Riley. I had a good feeling about it."
<img class="media__image media__image--responsive media__image--cut-format" alt="For the past four years, Riley Whitelum and Elayna Carausu have been sailing the world and documenting their travels on their YouTube channel, Sailing La Vagabonde. The pair met on the Greek island of Ios while Whitelum was sailing a monohull single-handedly and Carausu was playing live music." data-src-mini="//cdn.cnn.com/cnnnext/dam/assets/181015141408-sailing-la-vagabonde-elayna-riley-3-small-169.jpg" data-src-xsmall="//cdn.cnn.com/cnnnext/dam/assets/181015141408-sai