Does the NFL’s open locker room policy need to change?

Melvin Ingram finally spoke to me.

In fairness, the Los Angeles Chargers All-Pro linebacker did utter a few words to me last month after a demoralizing home-opening blowout loss to the Kansas City Chiefs. Among the talking points, I was hoping to ask him about his budding rap career.

It’s difficult to describe just how improbable Jordan Mailata’s journey to the NFL has been.

Sunday night at Wembley Stadium was different. The Chargers were joyful having scraped past Tennessee in a 20-19 thriller, after Titans coach Mike Vrabel’s gutsy but unsuccessful decision to attempt a two-point conversion following a last-minute touchdown drive.

I walked in the Chargers’ locker room to find a group of defensive players dancing and chanting in celebration.

Ingram was seated directly to my right, and I reintroduced myself.

Could we talk? “Sure,” he said, still beaming off a performance that featured five tackles, a sack and two pass deflections.

I asked him a couple of questions about the game, and then about his process of recording music.

“It’s the same process of getting ready for a game. You have got to (perfect) your craft,” he said. “I go in and zone out and just work.”

Finally, considering what had transpired earlier in the season, I asked Ingram if he finds it weird that reporters are allowed in a locker room where grown men are changing.

It is, but it can be easy for players to forget that.

The NFL says that its media access policy gives “fans an inside look at their favorite teams, deepens their connection with the league, increases the NFL’s audience, and keeps the focus on the game.”

But you need to tread carefully when navigating your way around an NFL locker room.

In that opening week game in Los Angeles, I walked into the visiting Chiefs’ tiny locker room space. The StubHub Center’s locker rooms were built for the LA Galaxy of the MLS, a league that carries 28 players per team, not the usual 53 on an NFL roster.

I elbowed my way through a scrum of sweaty bodies and steam – along with TV crews setting up cameras and tripods – before finding my target, offensive lineman Laurent Duvernay-Tardif, who recently graduated from medical school. He was just walking out of the showers.

After allowing the Canadian doctor time to dry off his 320-pound frame, we had a jovial chat about his groundbreaking achievement while his teammates cracked jokes in the background.

Video Ad Feedback
02:19 - Source: CNN
Will a NFL team ever be based in Britain?

Last week I waited outside the Oakland Raiders’ locker room at Wembley after the team’s 27-3 loss to Seattle Seahawks, wanting to speak to rookie lineman Maurice Hurst Jr., standing patiently in the vast underground hallway with a young Spanish reporter.

“I’m nervous,” he admitted. “They are not going to be in a good mood.”

“Be polite, and remember that you’re there to do your job,” I advised.

The doors opened and we both walked in – me first, the Spanish reporter insisted – to a room of eerie silence filled with large men facing a long flight back to California. Some sat in front of their lockers staring into space, others exited showers and dried off in bath towels far too small for them.

I spotted Hurst straight away and introduced myself. I found myself apologizing for his team’s loss (Why? I wasn’t playing.) and asked for five minutes of his time, which he kindly agreed to.

Hurst is as bright as they come, a four-time Academic All-Big Ten player at Michigan, and gave me three minutes and 15 seconds of intelligent answers, before sliding in “you got one more.”

A few seconds later I was walking out of the locker room. 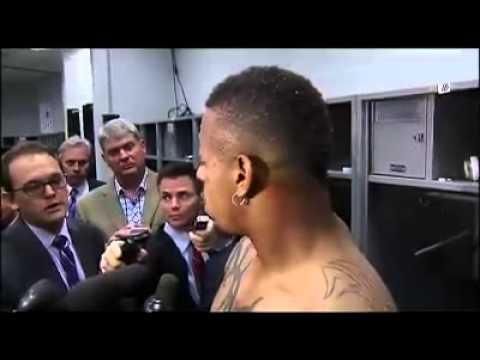 ‘No one belongs in the locker room’

Win or lose, some think the locker room is the last place on earth that should allow journalists, who are granted full access after a 10 minute cooling down period for players.

But the mixing of showering, microphones and video cameras can make for uncomfortable situations.

“I’m trying to shower, I’m trying to get over my emotions from the game, I’m trying to interact with my teammates, and there are people here in the locker room that really don’t belong here, both male and female.”

In 2015 the NFL Network inadvertently filmed at least two naked Cincinnati Bengals players during an interview with Adam “Pacman” Jones.

“It’s a great example of why the open (locker) room policy is old and needs to change,” Andrew Whitworth, one of the players filmed, who also served as a team representative in the NFL Players’ Association, told the Cincinnati Enquirer.

“Every single day I have to change clothes and be naked or not in front of media. It’s just not right. There’s no office, there’s no other situation in America where you have to do that. It’s dated, it’s old and it needs to change.”

READ: Why NFL fans are skipping the games and watching from parking lots

‘I hate being in there’

The league has come a long way since 1990, when Boston Herald reporter Lisa Olson was sexually harassed by members of the New England Patriots in the locker room after a practice. Olson sued the Patriots and then-owner Victor Kiam and settled the matter out of court.

“I feel uncomfortable too, I hate being in there,” she explained in an interview, “(but) as bad as it was, I still wanted to do my job.”

One thing can add to the discomfort of reporters entering locker rooms is a feeling that they are invading a sacred space that belongs to players.

CNN Sport producer Sean Coppack described being in the Los Angeles Rams losing locker room in 2016 and witnessing Robert Quinn tear up when describing his stance against social injustice.

“It was literally me, the cameraman, him and one trainer cleaning up the locker room. It was really odd, It was so surreal because there was no one else in there,” Coppack said.

READ: NFL kicker Josh Lambo on the secrets of consistency

“It’s the one place on earth that a grown man can display every emotion,” former Detroit Lions receiver Nate Burleson said on an NFL Network video on locker room culture.

“I’ve seen guys who have lost their jobs in the NFL and that’s all they talk about is the locker room,” he added. “It’s the relationships they built because they don’t get that anywhere else.”