Stocks up slightly after lowest close since 2020
New home sales bounce back in August
US home prices climbed in July, but showed a 'forceful deceleration'
Something isn't loading properly. Please check back later.

Priscilla Chan’s $61 billion mission to help the next generation

Priscilla Chan always knew her life’s work would be helping children, but she didn’t anticipate having billions of dollars at her disposal to try and change the fate of an entire generation.

Instead of an exam room, the desk of the 33-year-old pediatrician is in the middle of an unremarkable looking open office, home to the Chan Zuckerberg Initiative, or CZI. The Palo Alto, California-based group with 250 employees and two offices aims “to advance human potential and promote equality for all children in the next generation.”

Chan and her husband, Facebook founder and CEO Mark Zuckerberg, have pledged 99% of their wealth to the organization. But the majority of that money is still invested in Facebook, amounting to about $61 billion based on the recent share price.

“We are about building an aspirational future that everyone’s excited about,” Chan told CNN’s Poppy Harlow in an exclusive on-camera interview for the latest episode of Boss Files. “We have to be cognizant about how we make sure that the opportunity to access that is equal. There are some kids that are on a moving walkway and they’re gonna get there. There are other kids that are going the wrong way on an escalator.”

A different kind of philanthropy

Founded in 2015, CZI’s most ambitious goal is to cure, prevent or manage all disease in the next generation’s lifetime. Chan said it’s not something CZI will do on its own. It will try to accomplish it through investing, building technological tools and supporting scientists and researchers.

The group is active in other areas, too. It has developed software to help teachers create personalized lesson plans and funds a group that gives eye exams to low-income students. The organization is also pushing for policy changes around criminal justice, supporting a group that wants to eliminate mandatory minimum sentencing, and immigration reform for DREAMers.

Chan at her desk, which sits in the middle of the Chan Zuckerberg Initiative office in Palo Alto.
CNN

CZI is set up as a limited liability company, which allows Chan and Zuckerberg to have more flexibility and privacy with the way they use the money. Although it has a nonprofit subsidiary and has given $1.4 billion in grants, it’s designed more as a startup than a charity. It has more than $100 million in investments so far. Its LLC structure also allows it to give to political organizations.

CZI said it builds its technology in-house, invests in for-profit companies, and funds political advocacy work while trying to stay “bipartisan.” Former Obama adviser and campaign manager David Plouffe runs CZI’s policy and advocacy team. It has not supported any political campaigns to date, and Chan said there are no plans to do so. However, it does give to groups advocating for criminal justice and immigration reform. It has done some political advocacy through its 501(c)(4) subsidiary called Chan Zuckerberg Advocacy.

“We participate and support efforts in those areas but always in a bipartisan way. We don’t see ourselves as political,” said Chan.

“At some level, everything that matters can be political. The question is: Is it partisan?” Zuckerberg told Harlow during the interview, which took place at their home in Palo Alto. “Is one side for education and the other side against it? No, right? So there are ways where I think we can find a path forward together.”

While the spouses share the responsibility of running the organization, Chan is there daily. Zuckerberg comes into the office on Fridays. Now Chan is reluctantly stepping more into the spotlight to draw attention to the organization’s work. 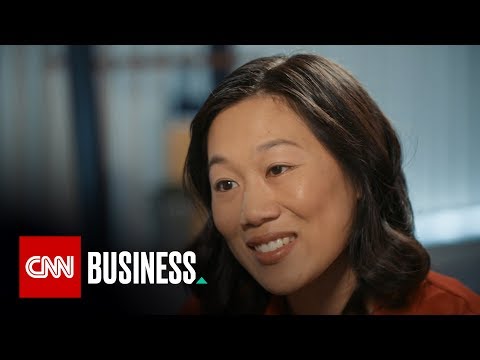 “I think that most people probably don’t know that much about her at all,” said Zuckerberg. “She just cares immensely about people.”

The child of refugees from Vietnam, Chan grew up in low-income housing outside of Boston and attended public school. With the help of her family and great teachers, Chan got into Harvard on a full scholarship.

“If you just stopped it on that first day that I got to Harvard, I would have lived the fullest version of the American Dream,” said Chan, with tears in her eyes. “My grandparents were business people in Saigon. The war hit. They were persecuted. The only way out was to put their children on boats and to send them off to sea, and hopefully they find opportunity on the other side.”

But Chan struggled to fit in at the Ivy League college.

“Harvard was so hard for me. I showed up, and I just felt like a failure,” said Chan. “I just felt like I didn’t belong – my one skill set of being smart, I wasn’t smart there anymore. I didn’t fit in.”

She even prepared paperwork to transfer out of Harvard, but then there was an incident with a child that she said changed her life.

While volunteering at an after-school program in a low-income housing project, Chan went looking for a young girl who had failed to show up one week. Chan ultimately found her at a nearby playground. Two of her front teeth were broken and Chan felt terrible that she was unable to prevent it from happening.

“I was devastated. I thought, ‘What happened? What did I do wrong?’” said Chan. “I thought at the time, ‘I am not enough yet. … I need more skills. I need more power to be able to solve this.’ And so, when you’re 20 years old and a type-A Harvard student, the answer is medical school.”

After she graduated, she taught fourth and fifth grade science for a year and went on to medical school to become a pediatrician.

Hatching an ambitious plan for a fortune

Along the way, Chan famously met Zuckerberg in line for the bathroom at a Harvard fraternity party.

Three years later, she got her first glimpse of a possible future in philanthropy. Zuckerberg had received an offer from Yahoo to buy Facebook for a billion dollars.

“It was the first time we realized that, ‘Oh my god, we have this incredible opportunity to give back.’ We started thinking through, ‘What would we do if you sold Facebook?’” said Chan. “Well, first of all we had no good ideas, so [we] said ‘You better keep running Facebook.’”

In 2016, Chan founded The Primary School, a private, nonprofit school in East Palo Alto, California, that now has 250 students. The project combines her biggest passions: health and school. Children receive full mental and medical health care services as part of their education

When their daughter Max was born, they announced the launch of CZI on the same day as a promise to give her a better world.

“We will do our part to make this happen, not only because we love you, but also because we have a moral responsibility to all children in the next generation,” read the couple’s letter.

Max, who is now almost three, is unfazed by her parents’ work. “If you ask her, she said, ‘Mom works at CZI. Dada works at a bookstore,’” said Chan. “She thinks Facebook is a bookstore.”

In the shadow of a tech giant

However, doing good is not without challenges. CZI has to deal with the cloud of Facebook’s very public controversies, including the Cambridge Analytica data scandal, the spread of misinformation, and the recent breach that compromised 50 million accounts.

Some critics have said the organization is meant to distract the public from Facebook’s woes, but Chan said she always planned to give back.

“This commitment was clear even before I met Mark and before Facebook was started. Also, there are a lot of things that are easier to accomplish for good PR,” she said.

Zuckerberg and Chan have also received criticism for their approach to philanthropy.

Some have said creating an LLC instead of a nonprofit makes it possible for them to profit from investments.

CZI’s spokesperson said the couple chose to create an LLC because it allows them to invest in for-profit companies working on important projects that may not be happening at nonprofit organizations. Any profit made by CZI investments will go back into the organization, she said.

Mark Zuckerberg and Priscilla Chan in 2016 as they rehearse for a speech in San Francisco.
Jeff Chiu/AP

The pair donated $100 million to Newark’s public schools in 2010. The headline-grabbing donation – announced on The Oprah Winfrey Show — stirred up local opposition and was the subject of the 2015 book “The Prize: Who’s in Charge of America’s Schools?,” which painted it as a failure.

“This work is not work that is going to fully play out in three or four years. It takes time,” she said. “The lesson I want us to learn here at CZI is hold yourself accountable but know that to really understand the full impact of your work, you’re just going to need to be patient,” said Chan.

Zuckerberg said CZI could potentially have a bigger impact on the world than Facebook, which has more than 2 billion users around the world.

“CZI just has the opportunity to do so much more in terms of helping people, helping create more education opportunities,” said Zuckerberg.

The organization has a long way to go before it fulfills its ambitious missions, but Chan remains determined. She is inspired by the way her parents were welcomed when they first arrived to the US 30 years ago.

“Everything that I am able to achieve is a downstream effect of families, churches, communities that said, ‘You need a safe place to be? We can be that for you,’” said Chan. “I am forever in debt and willing to fight for what I feel like is an extremely American value, and I just think that’s what makes this country great.”

Update: The headline on this article has been changed.