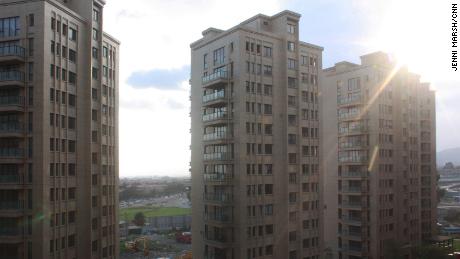 Skyscrapers, trains and roads: How Addis Ababa came to look like a Chinese city

Addis Ababa, Ethiopia (CNN)When Wang Yijun put Ethiopia's most expensive real estate project on the market, he experienced a strange phenomenon. People preferred the lowest floors over those with panoramic city views. "Power cuts mean elevators in this city often don't work," explains Wang, the site manager. "So the bottom-floor flats became the most valuable. You won't see this pricing in any Chinese city."

Replicating China's urban model in Africa has its challenges, but with limited developable space in Addis Ababa -- the capital is surrounded by protected farmland -- Wang believes high-rise living, such as Tsehay Real Estate's $60 million Poli Lotus development, is inevitable.
The Poli Lotus estate on the outskirts of Addis Ababa cost Chinese firm Tsehay Real Estate $60 million.
Theodros Amdeberhan, an Ethiopian lawyer, last year bought a three-bedroom, fifth-floor apartment here for about 3.5 million birr ($127,000). "Local developers never deliver on time," says Amdeberhan. The complex opened in 2016, and so far 70% of lots have sold. "When Mr Wang offered me a good price, I didn't hesitate," he says.
With red lanterns swaying over its entrance, the palm-tree peppered compound of 13 towers could easily be in Shenzhen, Chongqing or the suburbs of Shanghai. It's the sort of Chinese-ification that permeates much of Addis.
The Metro train passes through central Addis Ababa.
Cars chug through the city on smooth Chinese roads, Chinese cranes lift the skyline, sewing machines hum in Chinese factories in Chinese-owned industrial parks, tourists arrive at the Chinese-upgraded airport and commuters ride modern Chinese trains to work.
Read More
Simply put, Addis Ababa is becoming the city that China built -- but at what diplomatic and economic cost?

A city without addresses

Located 2,355 meters above sea level, Addis Ababa is one of the highest capitals in the world. Officials say 2.7 million people call it home, but that's based on a census from 2007. The real number is surely far bigger. Few buildings here have addresses, so taxi drivers operate by landmarks. And because Ethiopia was never colonized, barring a brief Italian occupation between 1936 and 1941, Addis lacks the European infrastructure that underpins many African metropolises. "It was never planned to be a city," says Alexandra Thorer, an architect who lived in Addis as a child, and wrote her thesis on the city's urbanization.
By the turn of the 21st century, Addis' population had swelled and its dirt roads badly needed upgrading. At the same time, China was pursuing stronger ties with African nations -- in 2000, Beijing held the inaugural Forum on China-Africa Cooperation, now a triennial deal-making pow wow.
The Ethiopian government saw China as a model for development and courted it for infrastructure, says Ian Taylor, a professor in African political economics at the University of St. Andrews, in Scotland.
A sign outlining the plan for Chinese constructed roads in Addis Ababa.
In two decades, the Chinese provided Addis with an $86 million ring road, the Gotera Intersection ($12.7 million), Ethiopia's first six-lane highway ($800 million), and the Ethio-Djibouti Railway line ($4 billion), which connects the landlocked country to the sea, to cite a sprinkle of projects. The speed at which Addis grew, says Thorer, mirrored the pace of 21st-century urban explosion in China.
China also built the first Metro system in Sub-Saharan Africa in Addis. Its two lines cut through the heart of the city, and carry at least 30,000 passengers an hour, who pay 6 birr ($0.30) a ride. "I thought it would fail quite quickly," says Thorer, "but actually it's really well used."
"Addis has been radically transformed," says Taylor. "Huge skyscrapers are changing the whole profile of the city." A 46-story glass tower will be the tallest in Ethiopia when finished in 2020 by the China State Construction Engineering Corporation.
The Chinese-built African Union in Addis Ababa, Ethiopia, in August 2018.
The city's most symbolic skyscraper is, of course, the futuristic African Union (AU) headquarters. Gifted to Addis by Beijing in 2012, the $200 million structure resembles nothing in Ethiopia.
"I didn't realize how Chinese it was until I went to China," says Janet Faith Adhiambo Ochieng, communications officer at the African Union. "Then I was like: 'Wow.'"

Getting in the red

In the early 2000s, Irish singer-songwriter Bono was part of a chorus of celebrities asking Western countries to cancel African debt, which was costing some governments three times more than healthcare. When the G8 agreed to waive $55 billion from mostly African accounts in 2005, Bono called it "a little piece of history."
Fast forward a decade, and Africa owes China about $130 billion, according to the Johns Hopkins SAIS China-Africa Research Initiative</a