‘You know I got a pistol?’ the man yelled. So the Uber driver shot him

After a heated text message exchange with his on-again, off-again girlfriend, Jason Boek followed an Uber he thought was giving her a ride home.

Driving along a dark stretch of two-lane road in central Florida, Boek swerved his pickup truck early Tuesday morning in front of the rideshare car.

They narrowly avoided a crash and stopped in the middle of the roadway.

Then, Boek jumped out of his truck and quickly walked toward Westlake’s Hyundai Elantra.

Bang. With one shot, the Uber driver killed him.

The fatal confrontation, captured on Westlake’s dash camera, was what the Polk County sheriff called a “classic ‘stand your ground’ case,” referring to the controversial Florida law that grants immunity to people acting in self-defense.

“This is a justifiable homicide all day long. You have the right protect yourself,” Sheriff Grady Judd said Wednesday. “This was the intent of the law.” 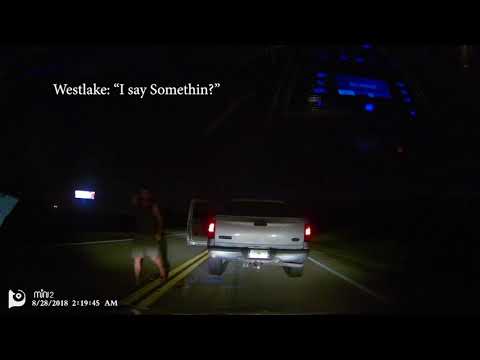 But the incident still left Westlake, 38, shaken up and filled with doubt.

“Everybody tells me what I did was right, but you feel like, ‘did I have to?’ after the fact,” he told CNN affiliate WFTS.

“I wish the whole chain of events didn’t happen,” he added.

Boek, 34, didn’t actually have a firearm when he left his truck – he was holding a cell phone, authorities said.

And Westlake was no ordinary Uber driver. He’s a licensed armed security guard who holds a concealed weapon permit and who had just completed training to be a police officer.

“All that went through my head was I’m not getting shot and that’s when I popped up,” he said.

In a text message to CNN, Westlake expressed condolences to Boek’s family.

The sheriff’s office said Westlake is cooperating with the investigation. And the sheriff wanted this much to be clear: “Here’s a message for the hotheads of the community: Don’t do that stuff,” Judd said. “Good people carry guns and they will shoot you. A lot. Graveyard dead.”

Boek’s family members could not be reached Wednesday for comment.

The Polk County Sheriff’s Office said Thursday it is not planning to bring a case against Westlake, but the investigation remains open pending the results of Boek’s autopsy. The sheriff’s office said the findings will be forwarded to the Office of State Attorney Brian Haas, whose jurisdiction includes Polk County.

The shooting is the latest high-profile “stand your ground” case to spark controversy. The list includes the fatal shooting of 17-year-old Trayvon Martin in 2012 by neighborhood watch volunteer George Zimmerman, and Michael Drejka’s fatal shooting of Markeis McGlockton in July in a convenience store parking lot.

Zimmerman was acquitted in Martin’s death after claiming self-defense, rather than leaning on the “stand your ground” law. Drejka was initially let go but has since been charged with manslaughter.

Tuesday’s incident started with a case of mistaken identity.

What you need to know about 'stand your ground' laws

At a bar in Dundee, Florida, early Tuesday morning, Boek’s girlfriend called an Uber for another woman who’d had too much to drink, and she helped her get into the vehicle, police said.

Boek saw her and assumed his girlfriend had gotten into the Uber, though she’d actually gone back into the bar, the sheriff said.

Some time later, Boek and his girlfriend got into a heated text message exchange.

“The boyfriend is explosive,” Judd, the sheriff, said. “He’s stalking his girlfriend. He’s angry with her, and he tells her, ‘I’m going to eff up the Uber driver.’”

Then, Boek drove after the Uber in his truck, Judd said.

Boek “tailgates him a minute, then he pulls out beside him, rides besides him a couple of seconds … and then starts to pass him and forces him to a stop in the roadway,” Judd said.

About six seconds after Boek jumped out of his pick-up truck, Westlake shot him, according to the dash-cam video released by police.

“Oh my God,” Westlake can be heard saying.

‘He came towards me’

Westlake then dialed 911 and tried to save Boek, the Polk County Sheriff’s Office said.

“He ran me off road, jumped out of his vehicle,” Westlake said calmly in the 911 call, which the sheriff’s office posted to YouTube. “I couldn’t get away.”

“He came towards me, shouted he’s got a pistol, reached for his waistband.”

Westlake said he fired one shot from a .40-caliber pistol.

“He dropped a cell phone. I kicked it away,” said Westlake, who said he didn’t realize it was a cell phone at first.

Westlake told the 911 operator he was applying pressure to the wound as Boek took faint, shallow breaths.

“Everything I do now I’m going to be reminded that this other person doesn’t get to do it. So it’s hard to enjoy some things,” Westlake said.

Uber, in a statement, said: “We are saddened by this unfortunate incident and will continue to work with police on their investigation.”

The company’s policy prohibits drivers and passengers from carrying firearms while using the Uber app to the extent permitted by local law.

Westlake has been suspended from using the app, Uber said. The company said it will evaluate his status after he submits a letter from law enforcement indicating that he is not a suspect or been charged in the shooting, the company said.