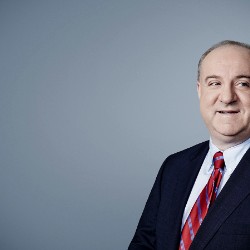 “I will be introducing an amendment next week to block the President from punishing and intimidating his critics by arbitrarily revoking security clearances. Stay tuned,” Warner tweeted Friday.

The amendment would be unlikely to pass but is expected to draw heavy Democratic support as they call attention to the controversy surrounding Trump’s revoking of Brennan’s clearance, a move which was announced Wednesday.

“I have a unique constitutional responsibility to protect the nation’s classified information, including by controlling access to it. Today, in fulfilling that responsibility, I have decided to revoke the security clearance of John Brennan, former director of the Central Intelligence Agency,” Trump said in a statement dictated in the White House briefing room by his press secretary Sarah Sanders. “Mr. Brennan’s lying and recent conduct characterized by increasingly frenzied commentary is wholly inconsistent with access to the nation’s most closely held secrets.”

Brennan is the first former national security official to see his security clearance revoked since the White House announced last month that Trump was considering taking that action against several of his most vocal critics in the national security world.

CNN’s Jeremy Diamond and Betsy Klein contributed to this report.