Chinese security forces broke into the home of an academic while he was giving a live phone interview with a US broadcaster Wednesday night, abruptly forcing him off-air.

Speaking with Voice of America from his home in the eastern province of Shandong, retired professor Wenguang Sun was discussing Chinese President Xi Jinping’s recent visit to Africa when security forces cut him off.

“It’s illegal for you to come into my place. I have my freedom of speech,” Sun shouted, before the line went dead.

The Chinese government has been stepping up its crackdown on free speech and criticism of the country’s leadership in recent years, under an increasingly powerful and assertive Xi.

As the police entered his house Thursday, Sun could be heard asking whether he had said something wrong.

“Listen to me … Is this wrong? Ordinary people are poor,” he said, before telling the interviewer seven or eight police officers have arrived.

“We don’t go to Africa to spread money Spreading money isn’t good to our country and society. Not beneficial,” he said in Chinese.

After the phone line went dead, the host of the show told viewers that the US government-funded Voice of America network “strongly” protests what happened to Sun. “This is the human right situation in China now,” said the host.

CNN has reached out to the Chinese Ministry of Foreign Affairs for comment.

Sun, who is in his 80s, is a long-time critic of the Chinese Communist Party and has frequently been in trouble with authorities for his criticism of the government, according to Human Rights Watch. 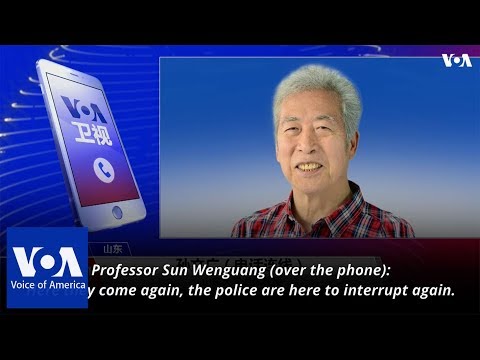 During the Cultural Revolution he was detained twice for 30 months for “counterrevolutionary speech” while recently, in 2009, he was physically beaten on his way to a memorial for former Chinese leader Zhao Ziyang. Sun suffered several broken ribs in the attack, Human Rights Watch said in a statement.

In a statement after the broadcast was aired, Voice of America said subsequent efforts by the network to contact Sun had not been successful.

“Everyone has the right to freedom of opinion and expression. This right includes freedom to hold opinions without interference and to seek, receive and impart information and ideas through any media and regardless of frontiers,” the statement said.

CNN’s Steven Jiang and Yong Xiong contributed to this article.