They ate raw centipedes – and then the headaches began

By Michael Nedelman, CNN
Updated 4:00 PM EDT, Wed August 1, 2018
Ad Feedback
Photos: What to know about tapeworms and parasites
Melanie Moser/CDC/DPDx
Cyclosporiasis: An intestinal infection caused by the cyclospora cayetanensis parasite, seen here on a stool sample through a microscope on a slide. Cyclospora infect the small intestine and most commonly cause watery diarrhea; other symptoms include abdominal cramping, nausea and weight loss.
Photos: What to know about tapeworms and parasites
Shutterstock
Trichinella spiralis: If a human or animal eats meat infected with Trichinella cysts, the Centers for Disease Control and Prevention says, their stomach acid dissolves the hard covering of the cysts. The worms pass into the small intestine, where they lay eggs that develop into immature worms, which travel through the arteries and into the muscles. There, they curl up and return to the original cyst formation, and the life cycle continues. Symptoms can include nausea, diarrhea, vomiting, headaches, fevers, chills, cough, facial swelling, aching joints and muscle pain.
Photos: What to know about tapeworms and parasites
Joana Veloso do Carmo/Hospital of Egas Moniz, Lisbon
Anisakiasis: The nematodes parasite of the genus anisakis causes an illness caused by eating parasite-contaminated raw fish or seafood. The anisakid nematodes can invade the stomach wall or intestines, causing symptoms of gastrointestinal pain, nausea and vomiting. Some people will develop complications, including digestive bleeding and peritonitis, inflammation of the inner wall of the abdomen. An allergic response to the worm can cause life-threatening anaphylaxis.
Photos: What to know about tapeworms and parasites
Shutterstock
Tapeworm, aka Neurocysticercosis, aka T. solium: This is Taenia solium, the pork tapeworm that causes one of the grossest diseases we're heard about in a while. It's responsible for the worst headache of Luis Ortiz's life. When surgeons looked in his brain, they found a "wiggling" tapeworm inside a cyst. That's called neurocysticercosis, and the Centers for Disease Control and Prevention says that about 1,000 people a year get them from eating something infected with "microscopic eggs passed in the feces of a person who has an intestinal pork tapeworm."
Photos: What to know about tapeworms and parasites
BSIP/UIG via Getty Images
Chagas disease, aka T. cruzi: This nasty disease comes from a bug called a triatomine that's infected with the Trypanosoma cruzi parasite. The CDC estimates there are at least 300,000 people living with the disease in the U.S. right now, but they may not know it. It unusually takes years of chronic infection before heart disease, heart failure and gastrointestinal problems begin.

Photos: What to know about tapeworms and parasites
Shutterstock
Toxocariasis T. canis and T. cati: Your precious pooch and sweet kitty can carry a nasty parasite. It's caused by the larval form of the roundworms that infect puppies, kittens and adults of both species that aren't dewormed.
Called Toxocara canis in dogs and Toxocara cati in cats, the roundworm eggs are excreted in feces, and if you (or your child) accidentally ingest infected dirt, they travel to organs and tissues, hatch and do their nasty thing.
Though not common, it's bad: The CDC says 70 people, mostly children, are blinded by the disease each year.
Photos: What to know about tapeworms and parasites
BSIP/UIG via Getty Images
Cat-scratch fever, aka toxoplasmosis or T. gondii: Toxoplasmosis infects more than a million people each year in the US. Once you get it, you've usually got it for life, the CDC says.
Photos: What to know about tapeworms and parasites
BSIP/UIG via Getty Images
Trichomoniasis T. vaginalis: This nasty STD is caused by the Trichomonas vaginalis parasite, and the CDC says it's the most commonly curable sexually transmitted disease out there. Nearly 3.7 million Americans are infected, and 70% don't have any signs or symptoms, so they may not even know they are constantly passing it along. That may be part of the reason another million people are newly infected each year.

Two people's neurological symptoms were caused by rat lungworm infections, according to a new report

After two people in Guangzhou, China, were admitted to the hospital with headaches and other neurological symptoms, doctors pinpointed an infection with a unusual backstory: They had eaten raw centipedes, according to a report published Monday in the American Journal of Tropical Medicine and Hygiene.

Fascinating, mysterious, and medically amazing case files. This series is the most interesting education into the world of medicine and disease and the human body.

The first patient, a 78-year-old woman, came to the hospital in November 2012 with a headache, sleepiness and cognitive impairment. Weeks later, her 46-year-old son also came to the hospital with a headache that had lasted for more than 20 days. Both patients had stiff necks, a sign of possible meningitis. Scans showed two suspicious spots in the woman’s brain, and one nodule in the man’s right lung.

Both patients had something in common: They had eaten raw centipedes from a vegetable market in Guangzhou.

Lab tests confirmed that they were infected with rat lungworm, otherwise known as Angiostrongylus cantonensis, which had caused a type of meningitis.

The parasite can fully mature in rats, not humans. “So when it gets in a human, it can get lost, and it will go to the brain, and it’ll stay there,” Heather Stockdale Walden, an assistant professor in the department of infectious diseases and pathology at the University of Florida, previously told CNN.

“When it gets to the brain, you can have eosinophilic meningitis,” she said, referring to an inflammation of the thin membrane covering the spinal cord and brain.

Humans have become infected with the parasite by eating contaminated plants and animals – including snails, slugs and even monitor lizards. But it was not known to be caused by eating centipedes, which have long been used in Chinese traditional medicine.

Still, it is rare to eat them raw, and “centipedes are not a normal diet,” Dr. Lingli Lu, one of the report’s authors and a neurologist at Zhujiang Hospital in Guangzhou, told CNN in an e-mail.

“The male patient believes eating raw centipedes are good for health,” and so he ate some and gave some to his mother, Lu said.

To confirm that it could have been the centipedes, the researchers purchased 20 of them from the same market where the two patients had gotten theirs. They found rat lungworm larvae in seven of the specimens – an average of 56 larvae per centipede.

“To our knowledge, this is the first report of A. cantonensis infection through the consumption of centipedes,” they wrote.

“We do know that people can acquire the parasite by consuming raw or undercooked snails and slugs,” Janice Okubo, a spokeswoman for the Hawaii State Department of Health, told CNN last year when the state saw a number of cases.

More than 140 species of mollusks, such as snails and slugs, have been found to be potential intermediate hosts in nature and in scientific experiments, according to the authors of the new report.

Parasites could be lurking in your sushi, doctors warn

Other animals that feast on these snails and slugs, including some frogs and fish, may also become infected. But as the name of the parasite suggests, the rat is the definitive host.

The parasitic worm, after being ingested by rats, makes its way from the intestine to the bloodstream, and then to the brain. They molt and mature in the brain and migrate back down to the lung’s arteries, where adult worms are found. An adult female may lay 15,000 eggs per day.

Rats cough up these worms and subsequently swallow them. This is how the parasites tend to end up back in rats’ fecal matter, where they are then eaten by slugs or snails – and so the cycle continues.

In humans, the parasite can’t survive for long, so most infections eventually resolve on their own. But in rare cases, it can cause serious complications and even death, according to the US Centers for Disease Control and Prevention.

What is Rat Lungworm (Angiostrongylus) Disease? 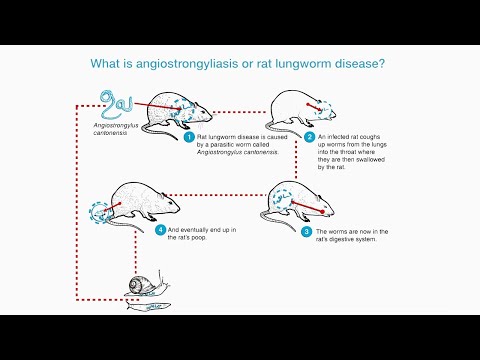 “Angiostrongylus cantonensis can present differently in adults and children. So usually, in adults, one of the main things that you hear complaint of is a headache,” Walden said. She added that adults commonly report neck stiffness, nausea and vomiting.

“In children, it’s more the nausea and vomiting, not so much the headache,” she said. Children will also run fevers and feel abdominal pain more than adults.

The ingested parasite “can also move to the eye, and you can get ocular Angiostrongylus,” Walden said. “If the parasite goes to the eye, sometimes you can surgically remove it.”

People do not become contagious, so they cannot transmit the infection to someone else.

The patients in the new report recovered well after 15 days of treatment, which included an antiparasitic drug and a steroid, the authors wrote.

Doctors generally look for clues and base their diagnoses on possible exposure to the parasite, through food or water, while living in or visiting an endemic region. Over 2,800 cases have been reported in about 30 countries, most of them in parts of Asia and the Pacific Islands, with fewer cases appearing in the Caribbean and Africa.

The CDC recommends washing vegetables thoroughly and boiling any frogs or snails you might be eating for three to five minutes. According to the agency, you may also want to cover any beverages to thwart any snails or slugs on a mission.