Miami Beach police are investigating the collapse of a 12-story building on Monday during a demolition that left one person injured, a spokesman said.

Samuel Landis, 46, was in critical condition at a hospital, police spokesman Ernesto Rodriguez said. Witnesses told CNN affiliate WPLG that the man was hit by a projectile from the building’s collapse.

Police said he was outside the building; video taken by an eyewitness shows an individual receiving CPR minutes after the collapse.

Rodriguez said the search and rescue efforts have ended and the department is now leading a criminal investigation.

Inspectors confirmed that the adjacent buildings are safe.

Albert Cabada, who owns the restoration company GC Construction, was working on the building next door and filmed the collapse. Cabada told CNN that the building was slated to be demolished in sections this week, but instead it collapsed completely.

“As far as I could tell they were scrambling before the collapse to close the streets,” he said.

Cabada said that demolition workers removed large sections of structural load-bearing walls on the front of the building, a decision that caused Cabada to notify management at the site that the demolition prep concerned him.

“It was poorly planned, in my opinion,” he added.

Now the building his company is working on is completely encased in dust, which he worries could be hazardous.

The building that collapsed at 5775 Collins Ave. was the 12-story Marlborough House, which was approved to be demolished to make way for new condos, according to the property developer Multiplan Real Estate Asset Management. 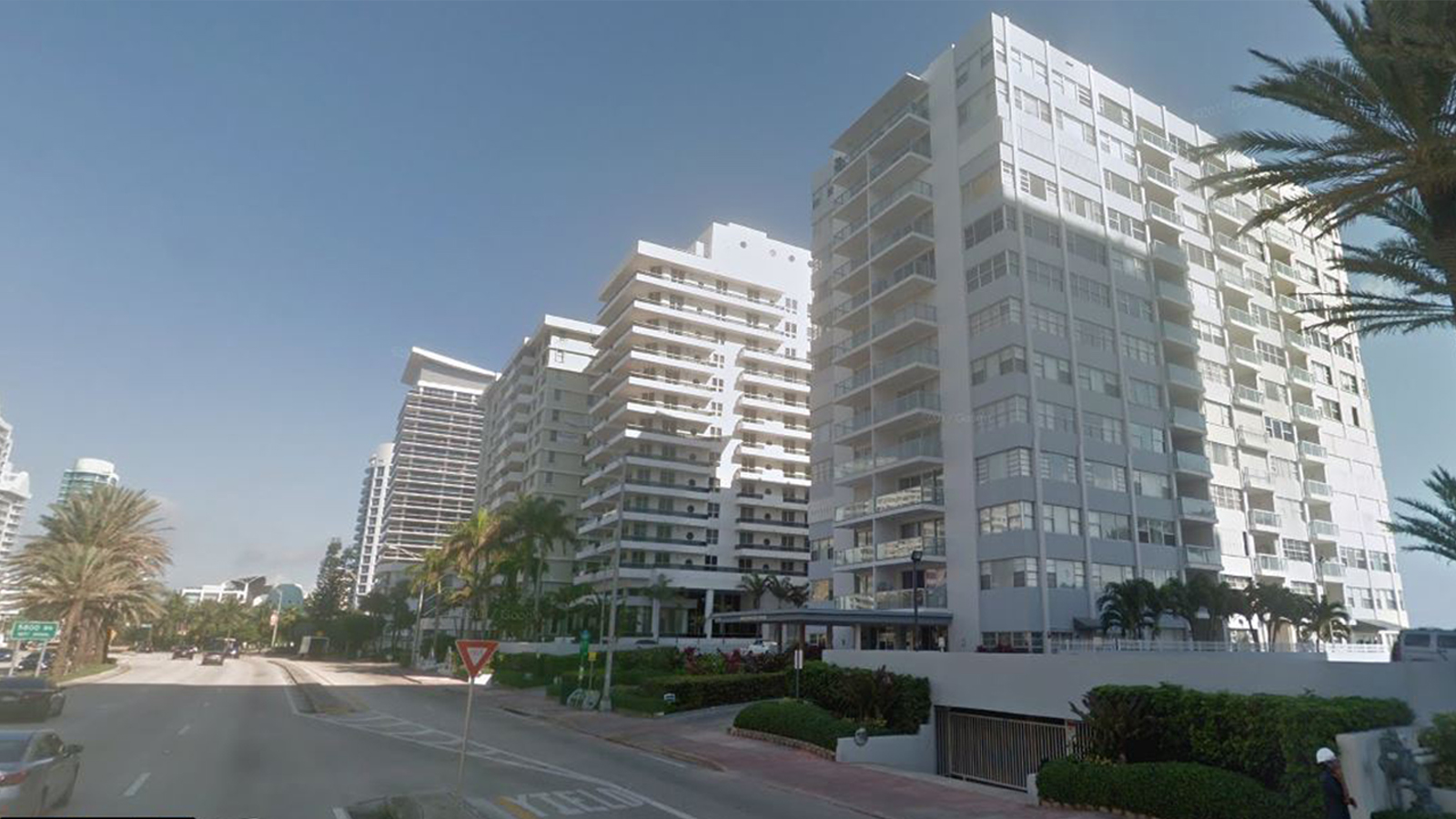 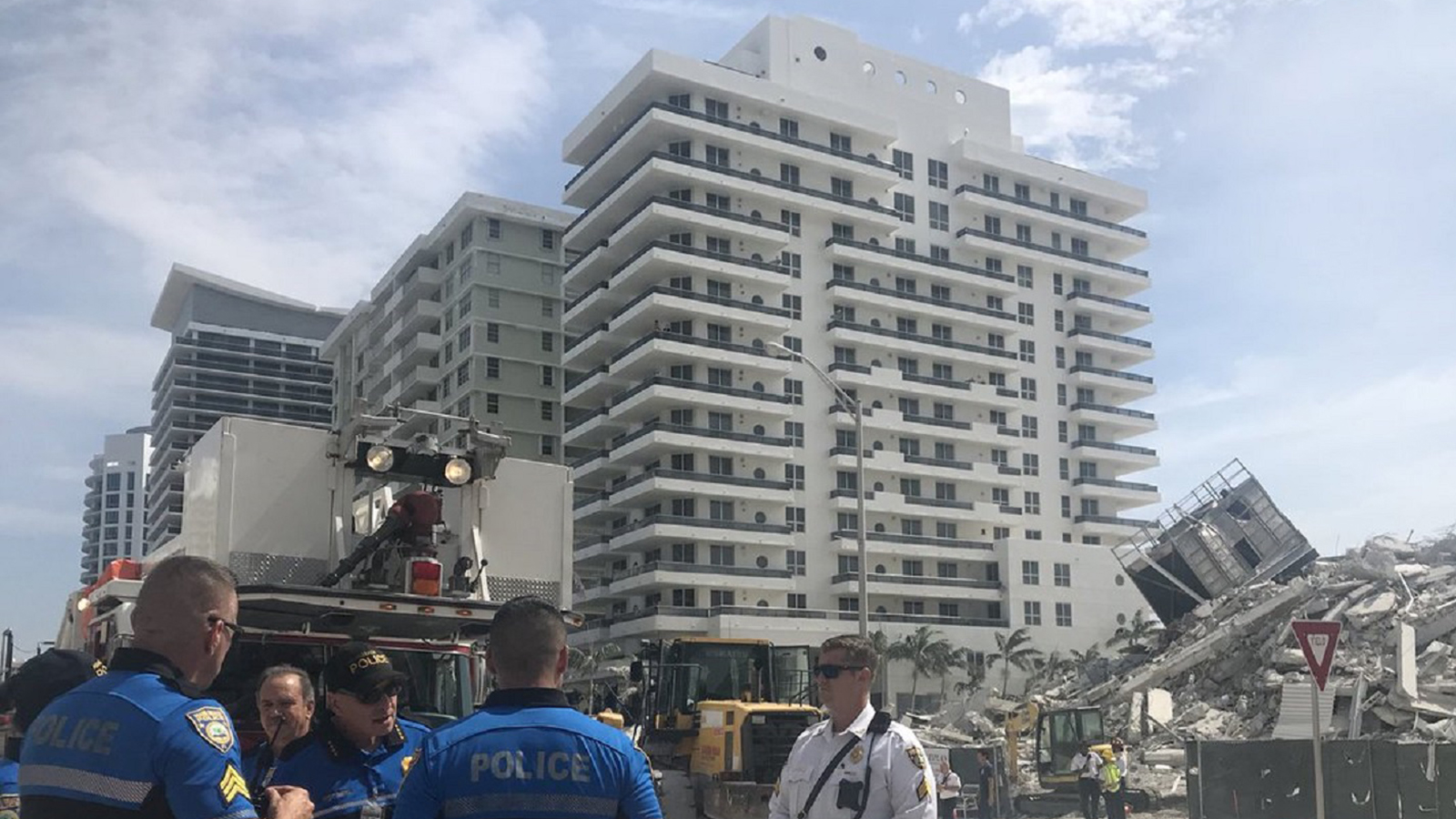 The company plans to build a “boutique oceanfront enclave” on the site, according to the company’s website. The new development will feature up to 87 high-end residences and will include a beach-facing pool, lounge and social area, the company said.

Police said there was a demolition permit on file for the site, but not an implosion permit. Demolition refers to the general process of tearing down a building, while implosion is specific to the use of explosives to quickly bring down a structure.

A black sign amid the rubble, seen in the bottom left of the image below, says, “Watch it come down.”

Winmar Construction, the general contractor on the development project, said that a “construction accident” occurred during the permitted demolition, according to a statement from company president Luis Leon.

Leon had identified the person injured in the collapse as a project manager from Allied Bean Demolition.

“We continue to monitor his condition and our thoughts and prayers go out to Allied’s project manager and his family during this difficult time,” Leon said.

“Safety remains the top priority for Winmar on all of its projects and we adhere to all safety protocols to ensure every precaution is taken. We are working closely with city officials and industry agencies to understand what happened during Allied’s demolition of the structure,” he added.

Collins Avenue in Miami Beach was closed in both directions near the collapse as police and fire officials responded.

Vicky Echeverri posted video to Instagram of dust filling the air after the building collapsed.

Adam Thompson, who lives at 57th and Collins near the site of the collapse, filmed the pile of rubble in the aftermath.

“The front of the building looked so flimsy the past couple days I was surprised it was able to stand,” he said.

Silvina Chinni took photos of the collapse from the beach.

This building super near me in miami beach just collapsed!!! Pics my mom took at the beach. Cloud of smoke and sirens everywhere pic.twitter.com/lnLZssB5Kq

“This building super near me in miami beach just collapsed!!!” Chinni’s daughter wrote on Twitter. “Pics my mom took at the beach. Cloud of smoke and sirens everywhere.”

CNN’s Keith Allen and Gianluca Mezzofiore contributed to this report.