By Lisa Respers France, CNN
Updated 1:52 PM EDT, Mon July 23, 2018
Link Copied!
YouTube star Jazz Jennings is part of the ranks of prominent transgender individuals doing their part to increase the community's visibility in the media. The teen activist appeared in Clean & Clear's digital campaign an stars in a TLC reality show about her life.
Emma McIntyre/Getty Images for Unilever/Dove
Former child star J.J. Totah came out as a transgender girl in am essay published by Time magazine. "My pronouns are she, her and hers. I identify as female, specifically as a transgender female. And my name is Josie Totah," Totah wrote.
Randy Shropshire/Getty Images
It was announced in July that transgender actress Nicole Maines had been cast as a transgender super hero, Nia Nal, who is described as "a soulful young transgender woman with a fierce drive to protect others" on The CW's "Supergirl."
C Flanigan/FilmMagic
Ines Rau has become the first openly transgender woman to appear as a Playboy Playmate with her spread in the November/December 2017 issue.
Monica Schipper/Getty Images
Gavin Rossum of the band LCD Soundsystem told Grindr in a July 2017 interview that she's been trying to come out fully as a trans woman for years.
From Instagram
In June, the artist formerly known as Charice Pempengco reintroduced himself to the world as Jake Zyrus. The singer debuted a new look in 2015 after telling Oprah Winfrey in an interview the year before that "Basically, my soul is like male."
Mike Coppola/Getty Images
Zeke Smith was outed as a transgender man on a controversial episode of "Survivor: Game Changers." The 29-year-old asset manager who lives in Brooklyn told People he struggled to forgive fellow contestant Jeff Varner who revealed the information during a Tribal Council.
Jeffrey Neira/CBS ENTERTAINMENT
Caitlyn Jenner, previously known as Bruce, revealed her new name and gender in Vanity Fair in June 2015. Jenner's announcement was called a watershed moment for transgender visibility. She appeared in the reality show "I Am Cait."
FROM vanity fair
Laverne Cox, who was cast as Frank-N-Furter in the "Rocky Horror Picture Show" remake, is the first openly transgender person to be nominated for an Emmy. She appeared on the VH1 reality show "I Want to Work for Diddy" and later produced her own series, "TRANSform Me." She now portrays Sophia, a trans woman in prison, on the Netflix show "Orange Is the New Black." She received the Emmy nomination for that role.
Valerie Macon/Getty Images
Former male model Andrej Pejic revealed to People magazine in July 2014 that she has undergone sex reassignment surgery and is now Andreja.
Jamie McCarthy/Getty Images
Former "Drag Race" contestant Carmen Carrera wants to be the first transgender model to walk the runway for the Victoria's Secret fashion show.
Ben Gabbe/Getty Images
Amanda Lepore is an iconic mainstay on the fashion and New York nightlife scenes. She has been a muse for fashion photographer David LaChapelle.
Cindy Ord/Getty Images
Lana Wachowski was "Laurence" when she and her brother Andy directed films like "The Matrix."
Timothy Hiatt/Getty Images
Producer/director Lilly Wachowski used to be Andy and transitioned after her sister Lana Wachowski.
Frederick M. Brown/Getty Images
Chaz Bono transitioned from Chastity Bono, which is how many fans knew him when he appeared on his parents variety series, "The Sonny & Cher Show."
Angela Weiss/Getty Images
Isis King was a contestant on the 11th and 17th cycles of "America's Next Top Model."
Mike Coppola/OUT Magazine/Getty Images
Lea T is a Brazilian/Italian who has served as a muse for the designer Givenchy. She revealed she was transgender in 2010.
Tullio M. Puglia/Getty Images

Maines was at the center of a historical court case

She talked about a recent controversy

“Supergirl” will be introducing the first transgender superhero on television.

The announcement was made this weekend at San Diego Comic-Con that transgender activist and actress Nicole Maines will be joining The CW series as Nia Nal, described as “a soulful young transgender woman with a fierce drive to protect others.”

Here’s what to know about Maines:

She was born an identical twin

Maines, 20, has an identical twin brother. She told ABC in 2015 that she identified as a girl at a young age.

Her brother Jonas said he was extremely protective of his twin when they were growing up.

“When I was a kid my dad told me to look after her and to protect her and do what you have to do,” he said. “So that was a huge responsibility that I had to carry around for a lot of years.”

Maines decided as a teen to undergo sexual reassignment surgery.

As a young teen, Maines and her family were at the center of a battle over transgender children and school bathrooms.

In 2014, the state of Maine’s Supreme Court ruled to allow a transgender child to use the school bathroom designated for the gender with which he or she identifies after Maines and her parents filed suit.

The Bangor Daily News reported at the time that the fight was not easy for Maines.

“I wouldn’t wish my experience on another trans person,” she said.

Maines and her family were the subject of the book “Becoming Nicole: The Extraordinary Transformation of an Ordinary Family,” written by Amy Ellis Nutt in 2016.

That same year, Maines presented a TEDx talk about growing up transgender.

Transgender: You're Part of the Story | Nicole Maines | TEDxSMCC 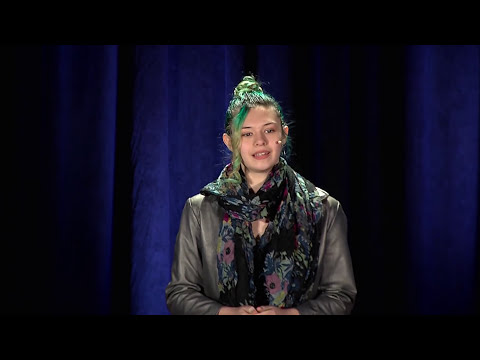 The actress recently talked to Variety about the controversy surrounding Scarlett Johansson being cast as a trans character in the film “Rub & Tug.”

Related: These trans actors could have been cast instead of Scarlett Johansson in her new movie

Johannson opted to step aside from the project following backlash.

“Cisgender actors don’t take trans roles out of malice,” Maines said. “I think it’s just failure to realize the context behind having cisgender people play transgender characters because we don’t see the same issue with sexuality.”