Who knew a panel at San Diego Comic-Con for the upcoming “Halloween” film would produce one of the most emotional moments of this year’s annual fan convention?

It all started during a Q&A portion of the program when audience member Jeffrey Scott recounted his encounter with a knife-wielding home invader.

“I was scared out of my mind and out of nowhere this thought inside of me went, ‘Well, what would Jamie Lee Curtis do?’” Scott said, according to videos posted online from those in attendance. “To make a long story short, I’m here today because of the way that you portrayed Lauri Strode. I’m a victor today instead of a victim.” 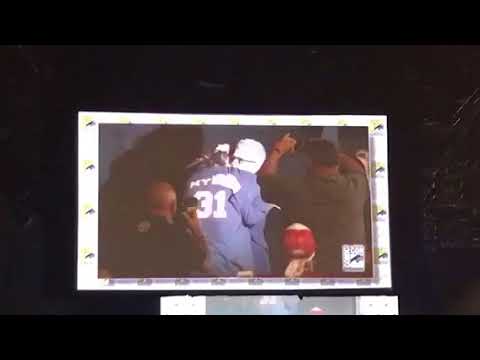 As Scott started getting emotional, he told Curtis, “You’re the only reason I came to Comic-Con this year.”

Listening from the stage inside Hall H, the convention’s largest venue, Curtis started to descend so she could give him a hug.

Curtis spent several minutes with Scott and even posed for a few photos.

For those who have never been to a convention like Comic-Con, close interactions with the celebrities in attendance are rare, for both security reasons and time restrictions.

Attendees are discouraged from making personal requests of talent – like for photos or autographs.

“Sometimes selfies heal, too,” Brown joked, before adding, “That was beautiful.”

The reboot of “Halloween,” in which Curtis will reprise her role as Laurie Strode, is set for release in October.