How often do you think how different your life would be if you knew, when you were a teenager, what you know now?

I often think of myself, leaving home for college months before my 17th birthday, so young and inexperienced, and beginning my career at 20 without the confidence that I have today.

So when I was asked to write a letter to my younger self as part of a new book called “WOWsdom! The Girl’s Guide to the Positive and the Possible,” I jumped at the opportunity.

“When you go to college at sixteen and suddenly realize you are a lot younger than everyone else, know the first months will be rough but don’t let other people question whether you belong there,” I wrote to myself. “You do.”

Looking ahead to my early career and times I doubted myself, I wrote, “When the rejection letters pile up as you pursue your dream of becoming an on-air reporter, don’t worry. You only need one offer. And be sure to save those rejection letters. They will be so fun to look at when you make it.”

How helpful it would have been to hear this and believe it at the time.

And that is exactly the thinking behind the book, which aims to inspire today’s young women to feel confident by reading letters from women of all ages written to their teenage selves.

Donna Orender is the creator of "WOWsdom! The Girl's Guide to the Positive and the Possible."
Renee Parenteau

The book is the brainchild of Donna Orender, a former president of the WNBA and professional basketball player. Orender is the founder of Generation W, an annual women’s conference that draws women from across the country to Jacksonville, Florida, and the founder of Generation WOW, a leadership and mentoring community for young women. (Full disclosure: I have moderated panels at Generation W for the past four years.) All the proceeds go to support girl-empowerment programs.

“I think that what we wanted was to give the girls the chance to get a step up on us, that they would be able to have insights and learnings and connections that we didn’t have at their age that would enable them to navigate a world that is pretty rough and tumble and tricky but full of positives and possibles,” Orender said. 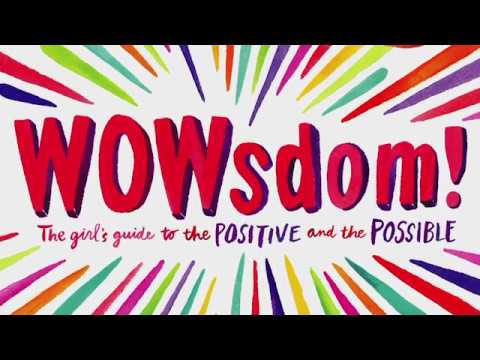 Lifford, who appears on “Queen Sugar” on OWN and had recurring roles on “Scandal” and “Parenthood,” wrote to herself about how in the course of her life, she would make what feels like mistakes. “Mistakes are never mistakes when we embrace them and learn from them. They then become fodder for a successful long-term outcome,” she wrote.

She also spoke of the importance of compassion, especially during rough times, and always knowing that you are “innately worthy.”

“Therefore, there is never-ever a justifiable reason for you to speak poorly of yourself or to treat yourself harshly in any way,” she said. “This is simply unacceptable.”

Research shows that girls’ confidence often plummets as they enter their tween and teen years.

According to a survey of nearly 1,400 8- to 18-year-olds and their parents and guardians commissioned by Claire Shipman and Katty Kay, co-authors of “The Confidence Code for Girls,” confidence dropped by 30% among girls between the ages of 8 and 14.

Shalett noted in her “Dear Young Lisa” letter how when she was younger, if she had to name her weaknesses, she could probably list them immediately.

“I remember what it was like to be a teenage girl – so many critics telling you your flaws and what you need to ‘fix’ and harshest of all, the built-in critic inside your head. These voices are Kryptonite!” she wrote. “Train yourself to lower the volume of those voices, and avoid the self-doubt and insecurity they foster. Instead, focus on your strengths.”

Shalett, who now advises start-ups, said that while she’s made some progress on the self-confidence front, she continues to be amazed at how “incredibly loud and persuasive” her own inner critic still is.

“I’ve learned a lot about how to quiet her, but definitely wish I had learned those strategies sooner so it was especially meaningful to be able to share advice on this topic with teen girls and young women,” Shalett wrote in an email. “Confidence and inner critics are the two topics I still hear most about in mentoring women of all ages. Let’s conquer these earlier.”

A 'confidence code' for girls: 5 ways to build up our daughters

The book is already being used in Generation WOW leadership and mentoring clubs in select parts of the country, including northeast Florida, and will be coming to clubs in Orlando, Jacksonville and Louisville, Kentucky.

“This book has real practical, actionable stuff that informs,” Orender said. “What about money? We never talk about money for girls, or women for that matter. How do I keep my body healthy, and what are good exercises, and what should I eat, and how does the planet really work, and what’s a good friend, and how do I take care of a good friend? There is so much practical, good, real-life stuff you just don’t get anywhere else.”

The book also contains letters from students to their future selves, including a letter from 14-year-old Taylor Richardson, who hopes to become a scientist, engineer and astronaut. Taylor, who was named one of Teen Vogue’s 21 under 21, is also an activist, raising over $110,000 to bring “A Wrinkle in Time” to girls in Ghana and over $20,000 to send young girls to screenings of “Hidden Figures,” the movie about three African-American women who played key roles in the US space program.

In her “Dear Future Taylor” letter, she writes, “You are showing girls, especially black girls, that they can be anything they want to be: an astronaut, an engineer, a scientist, a mathematician, or even the president of the United States!”

Shalett said she believes one of the biggest benefits from “WOWsdom” will be helping young women realize that they are not alone and that they are not the only ones experiencing what they are feeling. The book provides the “perspective, context and intel that young woman don’t often get,” she said.

“Every single letter says ‘It’s not just you; I’ve been there, too, and look at me NOW!’ in a very heartfelt, empowering and pay-it-forward way,” Shalett said. “If that isn’t confidence-inspiring, I don’t know what is!”

Added Orender, “It’s for teen girls but it’s for big girls, too. … It’s a book that every girl should have and every woman will read.”