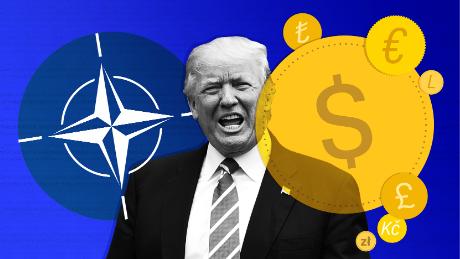 Is the US NATO's piggy bank? Here's what America gives and takes

(CNN)US President Donald Trump has arrived in Brussels with a clear message: NATO members must hike their defense spending and they must do it now.

Trump has long called on other NATO members to spend at least 2% of their gross domestic product on defense, as the transatlantic alliance's own guidelines recommend.
He has a point. The US spent more than 3.5% of its GDP on defense last year, and far more in previous years, while only three other member nations -- the UK, Greece and Estonia -- passed the 2% threshold last year, NATO data shows. Poland slipped in 2017 below the benchmark to 1.99%.
"I think these countries have to step it up, not over a 10-year period, but they have to step it up immediately," Trump said in Brussels on Wednesday, on day one of the summit. NATO allies in 2014 agreed to try and reach their 2% target over a decade, by 2024, too long a time frame for Trump. He pointed specifically to Germany as a wealthy nation that could boost spending now.
There was never any doubt Trump would come down hard on his mostly European allies in the 29-member alliance. He has spent recent days on Twitter slamming NATO as "very unfair."
Read More
A White House spokesman made clear last week the President will tell NATO that the US is not the world's piggy bank.

Is the 2% threshold reasonable?

While the 2% threshold has eluded some members -- whom Trump has slammed as "delinquents" -- most have boosted their spending in real-dollar figures in recent years.
NATO was formed after World War II and on the principle of collective defense -- an attack against one or more members is considered an attack against all. Each nation puts very little money in a NATO pot of funds. The idea is that each nation should have its own strong defense force, which requires a certain level of spending by individual members.
Trump is not the first US president to point this out.
"Lots of American presidents and administrations have made that point and pleaded with allies to increase spending. They just did it more politely," Elisabeth Braw, adjunct fellow from the Center for European Policy Analysis, told CNN.
Defense expenditure had largely dropped at the beginning of the decade, because Europe was relatively peaceful.
But following Russia's aggression in Ukraine and its annexation of the Crimean peninsula, all NATO members agreed in 2014 to reach the 2% threshold by 2024.
Trump has taken on a threatening tone ahead of the Brussels meeting, sending a series of letters to NATO allies, including Germany, Belgium and Canada, demanding they boost spending and threatening to shift the US military presence in Europe if they do not. The letters were first reported in The New York Times.
"I think Trump does have a point, but I think the way in which he's making his point is very unhelpful, because he's so unpopular here in Europe. If he bullies European leaders into spending more domestically, I think it would be foolish for them to spend as much as he wants them to because they will be seen as essentially just obeying his commands," Braw said.
<div data-ad-id="ad_bnr_b