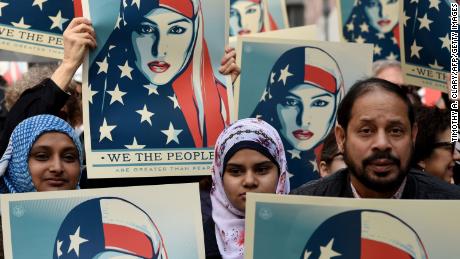 Protesters march in 2017 in New York's Times Square in solidarity with American Muslims and against the travel ban ordered by US President Donald Trump.

(CNN)The United States is on pace this year to admit the fewest number of refugees since the Refugee Act of 1980, which created the Federal Refugee Resettlement Program.

About 20,000 refugees are expected to have arrived in the year that ends September 30, according to two refugee advocacy groups' analyses of data from the State Department's Refugee Processing Center. About 16,000 refugees have entered the country so far this fiscal year, the data show.
"We'd be lucky if we get to 21,000 by the end of the year," said Lee Williams, senior vice president of the humanitarian organization US Committee for Refugees and Immigrants. Refugee Council USA offered a similar take.
That number of entrants would be by far the lowest since the advent of modern US refugee policies in 1980 and would mark a drop of more than 60% from the 2017 fiscal year.
The expected tally also would come to less than half the maximum number of refugees the Trump administration said it would allow to resettle in the United States this year, after slashing the cap to 45,000. In his final years in office, President Barack Obama had steadily hiked the annual cap to 110,000 refugees.
Read More
Curbing illegal immigration long has been a goal of Trump, who campaigned on the promise to "build a great wall" on the southern border and remove all undocumented immigrants. As President, though, Trump also has tightened some rules governing legal immigration.
The Supreme Court this week upheld the President's travel ban, which restricts entry of people from seven countries to varying degrees. The measure -- the ban's third iteration -- does not explicitly limit refugee admittances, as did the first two.
Those restrictions, along with enhanced security screenings enacted in January for refugees from 11 countries deemed high-risk by the administration, have led this year to a slowdown in refugee arrivals and contributed to the historic lull in admissions, refugee advocates said.
"The administration is putting unnecessary administrative hurdles in place to purposefully reduce refugee arrivals to all-time low levels," said Danielle Grigsby, associate director of Refugee Council USA, which represents resettlement agencies and other humanitarian organizations.
READ: How does the US screen refugees? Very carefully
Systemic delays also have meant some applicants' medical and background checks have expired as they've waited for final approval to resettle in the United States, Williams said.
The committee predicts the US resettlement process for an average applicant soon will surpass the window of 18 to 24 months typically seen during the Obama administration, he said.
The processing time of applications depends on a number of factors, a State Department spokeswoman told CNN. They include the time needed for security and medical checks and the frequency of in-person interviews.
Trump has said changes to the refugee system aim to strengthen national security, casting prior policies as perilously lax.
There were 22.5 million refugees worldwide in 2017, according to the United Nations Refugee Agency. Top host countries were Turkey -- with 2.9 million refugees -- followed by Pakistan, Lebanon, Iran and Uganda.
The United States since 1975 has welcomed more than 3 million refugees from across the globe, the UN agency said.
The 3 million is "more than any other country in the world," a State Department spokeswoman said.
"The United States will continue to resettle the most vulnerable refugees while prioritizing the safety and security of the American people," the spokesperson said. "There is no ban on any nationality or religion."