Wife of fallen Annapolis journalist: ‘He understood the key to success … is to remember your humanity’ 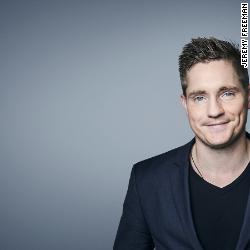 The wife of slain journalist Rob Hiaasen honored his life and legacy Friday, saying her husband brought humility and humanity to his loved ones, his life and his profession.

Hiaasen, 59, was slain in the newsroom Thursday while performing his duties as the assistant managing editor of the Capital Gazette newspaper in Annapolis, Maryland. Maria, his wife, survives him. Thursday was her 58th birthday.

“Rob was a natural observer and a natural human being in that he got humanity,” she said, speaking with CNN’s John Berman. “He realized this big world is fouled up and it’s full of all kinds of mayhem and pressure.”

“You can’t be a journalist and not see that,” she continued. “[H]e understood that the key to success as a human being … and as a journalist is to remember your humanity. To remember people’s feelings. To look for the human being behind the story.”

Maria Hiaasen went on to describe her husband as the rare kind of person who owned his mistakes and worked to make them right.

“Some journalists make mistakes,” she said, speaking on “Anderson Cooper 360.” “Let me be clear that all journalists do, all human beings do.”

“It’s those of us who are adults in the world, whether we are in elected office or sitting in the White House or elsewhere… [who] admit mistakes and try to correct them.”

Maria Hiaasen went on to share anecdotes from their lives, including the time he was rendered speechless upon meeting and interviewing his musical idol, James Taylor.

They were to open her birthday gift together when Rob returned home from work Thursday, but never got that chance.

“This is a loss to me. To my children, to my family… and to this community,” she said. “This is huge.”

“Its a loss I think, for all of us,” replied Berman. “Thank you for helping us remember the humanity, as you said your husband Rob would have wanted us to do.”

The longtime editor and columnist was among five killed Thursday when a gunman opened fire through the glass door of the newsroom at the Capital Gazette, said William Krampf, acting chief of Anne Arundel County police. Together, the victims had more than 75 years of experience at the paper.