By Thom Patterson, CNN
Updated 10:45 AM EDT, Fri June 29, 2018
Link Copied!
Ad Feedback
The largest airplane in the US military, the Air Force C-5 Galaxy dwarfs all other aircraft in this 2004 photo from Florida's Eglin Air Force Base. Click through the gallery for examples of the huge military equipment this monster airplane can haul.
USAF photo
The C-5 can haul an Air Force A-10 Thunderbolt II attack jet with its wings removed, like this one being loaded at Eielson Air Force Base in Alaska for transport to Georgia.
Brian E. Hibbert/US Air Force
A donated fire truck was the cargo for this C-5B Galaxy at Joint Base McGuire-Dix-Lakehurst, New Jersey, heading to Nicaragua to help volunteer firefighters.
US Air National Guard/Master Sgt. Mark C. Olsen
This ambulance -- also bound for Nicaragua -- was loaded on to a C-5 at Joint Base Charleston, South Carolina.
US Air Force/Staff Sgt. Kelly Goonan
The C-5 can carry as many as two 70-ton M1A1 Abrams tanks, like this one at Hunter Army Airfield, Georgia.
US Army/Lt. Col. Brian Fickel
The C-5 hauls helicopters, too. A C-5M Super Galaxy delivered this HH-60G Pave Hawk to Camp Lemonnier, Djibouti, in 2016.
Senior Airman Zachary Cacicia/US Air Force
A huge CH-47 Chinook helicopter was loaded onto a C-5M Super Galaxy last January at the Gulfport Combat Readiness Training Center in Mississippi.
Tech. Sgt. Ryan Labadens/US Air Force
Can the C-5 carry an F-16 Fighting Falcon fighter jet? Yep.
Sgt. Matthew Johnson/US Army
C-5s help NASA by transporting giant satellites to their launch sites for deliver into orbit. This GOES weather satellite is now circling the Earth, helping scientists learn more about the weather.
NASA/Kim Shiflett
A C-5 also transported a Webb telescope backplane Pathfinder -- or practice model -- and unloaded it at Joint Base Andrews in Maryland.
Desiree Stover/NASA
The cargo hold of the C-5 is 19 feet wide and 143 feel long -- longer than the first flight of the Wright brothers in 1903.
Senior Airman Dennis Sloan/US Air Force
Air Force C-5s are being upgraded to increase their power and range. The Air Force plans to keep these giant transport jets in their fleet into the 2040s.
Greg L. Davis/US Air Force

Here's what the biggest jet in the US military can carry

One of the largest airplanes in the world, the C-5 changed US military strategy and planning

One of the largest airplanes in the world – a jet that forever changed America’s military and airline industry – is turning half a century old.

When you see a C-5 Galaxy on the ground for the first time, the first thing that strikes you is… it’s freakishly huge.

Length: 247 feet. Wingspan: wider than a Boeing 747-400. The pilot sits about three-and-a-half stories high in the cockpit, and the plane’s T-tail stands as tall as a six-story building.

The transport jet certainly must have turned heads on June 30, 1968, when it first took off from a runway at Lockheed Martin’s historic factory north of Atlanta. Until the 1980s, it reigned as the world’s largest airplane.

For the first time, the C-5 made it possible for 70-ton tanks, fighter jets, multiple helicopters or other huge cargo to go just about anywhere in a matter of hours instead of weeks aboard a ship.

It made the Pentagon more nimble. More flexible to quickly shifting events. And it redefined how military forces — and lifesaving humanitarian aid — could be deployed.

The C-5 is credited with spurring the development of new engine technology that benefits virtually all air travelers today.

More about that in a second. First, let’s talk about this plane’s superpowers:

WOWZA! The US military's largest aircraft, the USAF Lockheed C-5, has arrived at #OSH16! #avgeek pic.twitter.com/olghYrLvhD

Hitting the big 5-0 usually calls for a celebration. So last Tuesday, at the same Georgia site where it flew for the first time, politicians, Air Force generals, business executives and assembly-line workers gathered under a big tent to mark the jet’s golden anniversary.

A newly upgraded C-5M, the big bad belle of the ball, sat nearby, filling up the background, standing on its 28 wheels, holding its T-tail proudly in the air and acting all nonchalant about those four beautifully gargantuan engines hanging off its wings.

“This airplane has served as an ambassador of the skies – both for both war and for peace,” Georgia Gov. Nathan Deal told the crowd.

Recent peaceful missions include delivering humanitarian aid in the US – like C-5s did last year when they hauled medical teams and emergency supplies to help victims of Hurricanes Harvey, Irma and Maria.

After ISIS forces destroyed a key bridge across the Tigris River in Iraq, the Air Force said 11 C-5s flew 5,000 miles each way to deliver materials to build a floating bridge in 2017, helping hundreds of thousands of evacuees who needed to cross.

Fans of the C-5 love to brag about these missions:

This plane’s legacy has touched billions of travelers

If you travel by air, it’s likely your life has been touched by the C-5’s legacy. The plane is largely responsible for the development of modern airliner engines that fly billions of passengers each year.

The magic is in the fans — which suck in a lot more air in the front, while the engine pushes a much stronger force out the back.

“Most of the thrust from the C-5 engine comes from that giant fan in the front. It’s very fuel-efficient,” said Lockheed Martin aviation historian Jeff Rhodes. “The 747, DC-10, L-1011 — all the wide-body airliners — came almost on the heels of this.”

The C-5 had a rather difficult time at first. A tragic crash during the evacuation of orphan refugees from South Vietnam in 1975 killed 202 people.

In the ’70s, cracks were discovered in some wings of the C-5As — the first version of the plane. C-5A wings were eventually replaced. 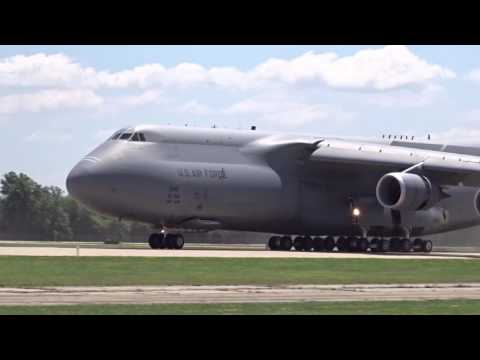 The 1980s, ’90s and 2000s saw the C-5 taking part in high-profile aid missions worldwide, including deliveries to cleanup a catastrophic oil spill in Alaska’s Prince William Sound, supplying refugees from wars in Rwanda and Kosovo, feeding the hungry in Somalia and helping flood victims in Mozambique. During the 1980s, the C-5 lost its status as the world’s largest military production aircraft when a a new transport jet called the Antonov AN-124 Ruslan joined the fleet of the Soviet air force.

“The C-5 has been emblematic of the US resolve to do good in the world by providing an unmatched capability to help people anywhere, when they need assistance,” said Dr. Doug Lantry, curator and historian at the National Museum of the US Air Force.

In addition to being a marvel, the plane has been somewhat of a disappointment, too. “It’s performed very well in its missions, both humanitarian and military, but it has had frustrating reliability problems,” Lantry said. “The C-5 modernization program should help the plane fly through around 2040 and achieve it’s original promise with greatly improved reliability.”

“Over 60 different improvements were made to the C-5M over the previous version,” said Air Force Brig. Gen. Kenneth Bibb, commander of the Air Force tanker airlift control center at Scott Air Force Base in Illinois. “Now it can go much farther, climb much higher and is much more fuel efficient. You can go from the East Coast to Turkey — or from the West Coast to Japan – without refueling.”

If you’re feeling the need to see one of these mega machines in real life, C-5s from Travis Air Force Base will be visiting the following events this summer:

It’s a chance to take a stroll through the cavernous cargo hold of an amazing jet that really has changed the world.