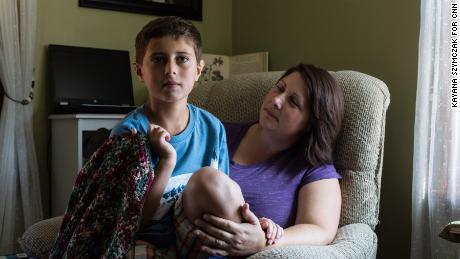 Trevor Foltz was diagnosed with infantile spasms, a debilitating seizure disorder, in 2007 and became the first child at his Rhode Island hospital caught up in what has become one of the largest drug price hikes in the nation's history. His mother, Danielle Foltz, became his chief advocate. (Kayana Szymczak for CNN)

Anatomy of a 97,000% drug price hike: One family's fight to save their son

Newport, Rhode Island (CNN)Trevor Foltz splashes in the pool in his grandparents' backyard. His brother and sister join in the fun, as does their father.

Their mother, Danielle, watches from a nearby lawn chair. She's like a hawk, keeping a close eye on Trevor and the rest of her brood.
It was 10 years ago in this backyard when a similar moment of revelry was shattered. Trevor, then a toddler, was running around, having the time of his life, his mom keeping steady watch.
Trevor suddenly came over, placed his hand on her knee and looked directly into her eyes. He tried to speak but couldn't say a word. Then his head twitched ever so slightly to the right. Their gazes locked. Mom's heart wrenched.
It was so mild that Danielle told herself it must have been her imagination. She didn't tell her husband, Jonathan, or anyone else. But moments later, it happened again: Trevor coming to her, resting his hands on her knees, looking into her eyes.
Read More
Trevor plays with his brother and sister, Toby and Bristel, in the swimming pool at their grandparents' house. The family swims together every weekend in the summer and uses the time together to bond.
Trevor's condition soon became obvious to all. The Foltzes were eating dinner with friends a few days later when Trevor had one seizure, then another and another.
"Some heartache transcends language," Danielle recalled. "This is one of them."
The Foltzes had been there before. At 7 months, Trevor was diagnosed with infantile spasms, a rare and catastrophic form of epilepsy. The diagnosis was devastating, forcing the family to cancel an overseas move and fight for their son's life.
It also thrust them into the unregulated world of America's drug prices.
Trevor's doctors said he needed a "miracle drug" known as Acthar. But between Trevor's birth and diagnosis, the price of the drug had shot up from $1,600 a vial to more than $23,000 a vial -- making him one of the first children caught up in one of medicine's most controversial price hikes.
After the initial diagnosis, the Foltzes wrestled with their insurance company for days to get Trevor treated with Acthar. Eventually, the treatment was fully covered, at a cost of more than $125,000. And the drug worked. The tremors stopped.
But more than a year later, on that day in the backyard, the seizures had returned. Another round of treatment was in order.
Again, the Foltzes ran into red tape. The insurer was balking at spending another $125,000, and Trevor's parents worried whether he would get the precious vials of medicine needed to give him a shot at a normal life.
A decade on, the pain is still raw. Still palpable. Still real.
"It feels like we're pawns," says Trevor's father, Jonathan. The drugmaker, he says, "is allowed to take advantage of us, and we have to move on and go about the challenge of living."
"It seems very backwards, from the top down -- and we're at the bottom."

We often hear about exorbitant drug price hikes in the moment.
The Internet lit up with outrage when the price of EpiPen, the emergency medicine used to treat severe allergic reactions, went through the roof.
A kitchen drawer in the family home is full of syringes, next to spoons and sippy cups.
"Pharma Bro" Martin Shkreli was dubbed the "most hated man in America" after he raised the price of an AIDS drug by more than 5,000%. His tears at being sentenced to seven years in prison drew little sympathy.
But we rarely hear about the anatomy of a price hike, especially one that climbed for more than a decade in the face of a federal investigation and protests from top medical associations.
I wanted to know how a drug invented in the 1930s could go from $40 a vial in 2000 to $39,000 in 2018 -- essentially from the cost of a coffee maker to the price of a new car with leather seats. With a treatment regimen requiring at least three vials over the course of several weeks, this drug costs more than many people's homes.
The sharp jump in Acthar's price outraged families, doctors, pharmacists and hospitals -- and led Danielle Foltz to testify before Congress against the increase.
It ultimately resulted in a $100 million settlement between the government and the drugmaker -- as well as revelations that Medicare has spent nearly $2 billion covering Acthar prescriptions for seniors while the drugmaker paid millions to prescribing doctors.
The exorbitant price also forced doctors and hospitals to question whether a $20 alternative would work just as well.
I first heard about Acthar from the epilepsy community; my own son has an uncontrolled seizure disorder. Parents would often cry when describing the cost of Acthar and the struggle to get the medicine for their child.
Please tell this drug's story. Our story.
Imagine holding a vial worth more than your minivan, your hand trembling for fear of dropping it, while you administer a shot with a 1-inch needle to your seizing, screaming baby.
I spent the past year canvassing the epilepsy community, talking to scores of people, including 10 parents whose children struggle with infantile spasms and more than a dozen doctors who treat them.
I felt that it was important to tell Trevor's story since he was among the first children caught up in the price hike and his mother spoke so bravely before Congress. He was in such good health when his mother testified, I wondered: How is he